The Farm by Emily McKay - more2read.com

The Farm by Emily McKay 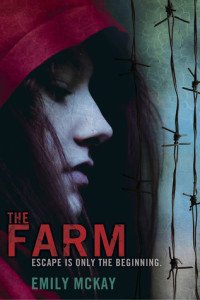 Life was different in the Before: before vampires began devouring humans in a swarm across America; before the surviving young people were rounded up and quarantined. These days, we know what those quarantines are—holding pens where human blood is turned into more food for the undead monsters, known as Ticks. Surrounded by electrical fences, most kids try to survive the Farms by turning on each other…

And when trust is a thing of the past, escape is nearly impossible.

Lily and her twin sister Mel have a plan. Though Mel can barely communicate, her autism helps her notice things no one else notices—like the portion of electrical fence that gets turned off every night. Getting across won’t be easy, but as Lily gathers what they need to escape, a familiar face appears out of nowhere, offering to help…

Carter was a schoolmate of Lily’s in the Before. Managing to evade capture until now, he has valuable knowledge of the outside world. But like everyone on the Farm, Carter has his own agenda, and he knows that behind the Ticks is an even more dangerous threat to the human race…

You will find that this story does have teenage characters, a possible love interest and vampires not all in the same context and is told successfully and proved to be an enjoyable read for me.
It starts with the narratives of two sisters told in different chapters in a dystopia setting, there is a need to survive, a care and love for each for other, a possible plan to break free, a journey out of to freedom from The Farm.
The story grabs you from the start you have a feeling of the moment and the dilemma of the twin sisters, from then on the author has you and keeps you successfully in the story in a visceral fashion at times emotional and others thrilling.
Delivered with a well paced momentum in different narratives, first person p.o.v mostly three mainly Lily and her twin sister Mel and Carter the male character who tries to aid and has possible love for one. I found Mel a very interesting character to read of there is only very short narratives from Mel poetic at times shes talks in unconventional ways, she communicates with nursery rhymes and expresses feelings with certain sounds and music.
This novel leaves you with something at the end and definitely wanting more and I feel she’s careful left a lot more to come in the continuation in the next book.

“Four times a day, all the Greens shuffled out from their various hiding places and ambled over to the dining hall, where we were scanned, prodded, and fed. Yeah, we were treated like cows, except cows lived in the blissful oblivion of not knowing their future. We Greens couldn’t escape the reminders of what was to come. Not when Collabs took weekly “donations” at the mobile blood bank. Calling it that was their way of making it seem voluntary. It wasn’t. And every time we donated blood, they tested it to see how “clean” it was, whether or not it would make good food for the Ticks or if it had too many of the hormones the Ticks seemed to crave. On the Farm, we weren’t raising food; we were the food.”

Mel
“Places have music, too.
Home always sounded like Beethoven’s Ninth. School, like skate punk.
Only holy ground is quiet. “

Reviewed by Lou Pendergrast on 06 February 2013