The Escape Artist by Brad Meltzer

The Escape Artist by Brad Meltzer :

WHO IS NOLA BROWN?
Nola is a mystery
Nola is trouble.
And Nola is supposed to be dead.

Her body was found on a plane that mysteriously fell from the sky as it left a secret military base in the Alaskan wilderness. Her commanding officer verifies she’s dead. The US government confirms it. But Jim “Zig” Zigarowski has just found out the truth: Nola is still alive. And on the run.

Zig works at Dover Air Force Base, helping put to rest the bodies of those who die on top-secret missions. Nola was a childhood friend of Zig’s daughter and someone who once saved his daughter’s life. So when Zig realizes Nola is still alive, he’s determined to find her. Yet as Zig digs into Nola’s past, he learns that trouble follows Nola everywhere she goes.

Nola is the U.S. Army’s artist-in-residence-a painter and trained soldier who rushes into battle, making art from war’s aftermath and sharing observations about today’s wars that would otherwise go overlooked. On her last mission, Nola saw something nobody was supposed to see, earning her an enemy unlike any other, one who will do whatever it takes to keep Nola quiet.

Together, Nola and Zig will either reveal a sleight of hand being played at the highest levels of power or die trying to uncover the US Army’s most mysterious secret-a centuries-old conspiracy that traces back through history to the greatest escape artist of all: Harry Houdini.

“The Escape Artist has a magic trick up its sleeve. Part Lisbeth Salander, part Homeland’s Carrie Mathison. One of the most memorable characters I’ve read in years. Look out–Nola’s coming. This is Meltzer in peak form.”-Lisa 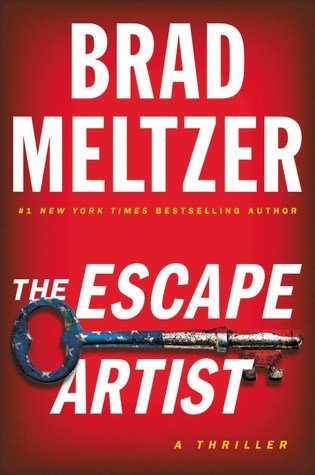 “This novel is like a launched torpedo slashing through 400 pages of deep water before reaching impact. Enjoy one of the best thriller rides ever.”-David Baldacci

“Brad Meltzer has done it again! The Escape Artist is an exciting, cutting-edge thriller you will not be able to put down. If you love twists, tension, and tons of amazing characters, treat yourself to this gripping tale by one of the absolute best in the business.”-Brad Thor

“Meltzer is a master and this is his best. Not since The Girl with the Dragon Tattoo have you seen a character like this. Get ready to meet Nola. If you’ve never tried Meltzer, this is the one.”-Harlan Coben

“The Escape Artist is a slingshot of a novel. Brad Meltzer expertly pulls it back and lets it go, propelling the unlikeliest of heroes forward in a high stakes, high tension thriller that never lets you catch your breath. My advice: Buckle up!”-Michael Connelly

“A throat-clenching masterpiece of suspense-and damned ingenious to boot. My jaw dropped once more–and so will yours.”- James Rollins

“Stellar…With its remarkable plot and complex characters, this page-turner not only entertains but also provides a fascinating glimpse into American history.” – Publishers Weekly

Two lives digging for truths, two lives twain in battlement with death, one literary starting her teen life out digging a grave, to becoming one wanting to be dead, the other with a job, maybe in part due to kin lost to terrible circumstances, that maybe serves as a second chance for the fallen by fixing them up to a presentable state.
These two characters man and woman pulling the reader on with mystery and intrigue.

Plane down, why ? Who did it ? Some of the driving questions, but ultimately these two memorable characters either up against loss, or racism, and terrible circumstances and how death pulls their hearts strings and the readers once immersed in the tale.

One part of the tale rides along building momentum in the present and another part in various chapters with some great characterisation in the building of the woman Nola Brown who had plenty pains and obstacles but became tougher and tougher.

Pre-warning to the reader of being succumbed by thrill of clear and present danger and conspiratorial manoeuvrings that will in rapid fire succession insidiously try to alter the characters lives.

“Here, in Delaware of all places, at Dover Air Force Base, was America’s most important funeral home.”

“According to the casualty report, her military plane crashed just after takeoff, outside of Copper Center, Alaska, on the edge of the national park. All seven people aboard, including the pilot, were killed.”

“I know she was a war painter.” “Not just a painter. She’s the Artist-in-Residence.

“Nola has an exceptional visual memory; she can absorb and recreate a crime scene in a moment. When she starts painting, details leap out at her, details no one else sees. But what she excels at more than anything”—he took a breath through his nose—“is pissing people off.”

“There was no supervising Nola. Even on assignments, she didn’t listen. Didn’t engage or even argue. Nola just did.”

“On most days, Nola’s specialty was finding the hidden things, the lies we hide every day.”

Reviewed by Lou Pendergrast on 14 March 2018