The Dinner by Herman Koch - more2read.com

The Dinner by Herman Koch 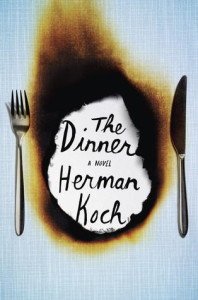 An internationally bestselling phenomenon: the darkly suspenseful, highly controversial tale of two families struggling to make the hardest decision of their lives — all over the course of one meal.

It’s a summer’s evening in Amsterdam, and two couples meet at a fashionable restaurant for dinner. Between mouthfuls of food and over the polite scrapings of cutlery, the conversation remains a gentle hum of polite discourse — the banality of work, the triviality of the holidays. But behind the empty words, terrible things need to be said, and with every forced smile and every new course, the knives are being sharpened.
Each couple has a fifteen-year-old son. The two boys are united by their accountability for a single horrific act; an act that has triggered a police investigation and shattered the comfortable, insulated worlds of their families. As the dinner reaches its culinary climax, the conversation finally touches on their children. As civility and friendship disintegrate, each couple show just how far they are prepared to go to protect those they love.
Tautly written, incredibly gripping, and told by an unforgettable narrator, The Dinner promises to be the topic of countless dinner party debates. Skewering everything from parenting values to pretentious menus to political convictions, this novel reveals the dark side of genteel society and asks what each of us would do in the face of unimaginable tragedy.

The scene is set, a dinner for four in a Dutch restaurant. The characters are two brothers with their wives.
Many things shall become unraveled in this meeting of sorts, a satirical meeting of parents on a dilemma a gruesome discovery that could almost put you off your desert or their desert, will they eat their desert? Well you’ll have to find out.
If some dark truths come to light one brothers political campaign may be at risk, decisions and a four course meal to stomach leaves no room for playtime. There is a very serious dilemma to solve.

The author has taken a simple setting at a restaurant with a family and crafted a neat physiological tale of family intrigue and darkness. The story grabs your interest from the beginning and keeps you right up to desert and the exit of the doors of one Dutch restaurant.
The side-effects of reading this may be that you wonder next time you Dine at what thoughts and what conversations people partake in while dining, with a satirical grin.

Reviewed by Lou Pendergrast on 13 February 2013