Book Review: The Devil Himself by Peter Farris - More2Read

The Devil Himself by Peter Farris 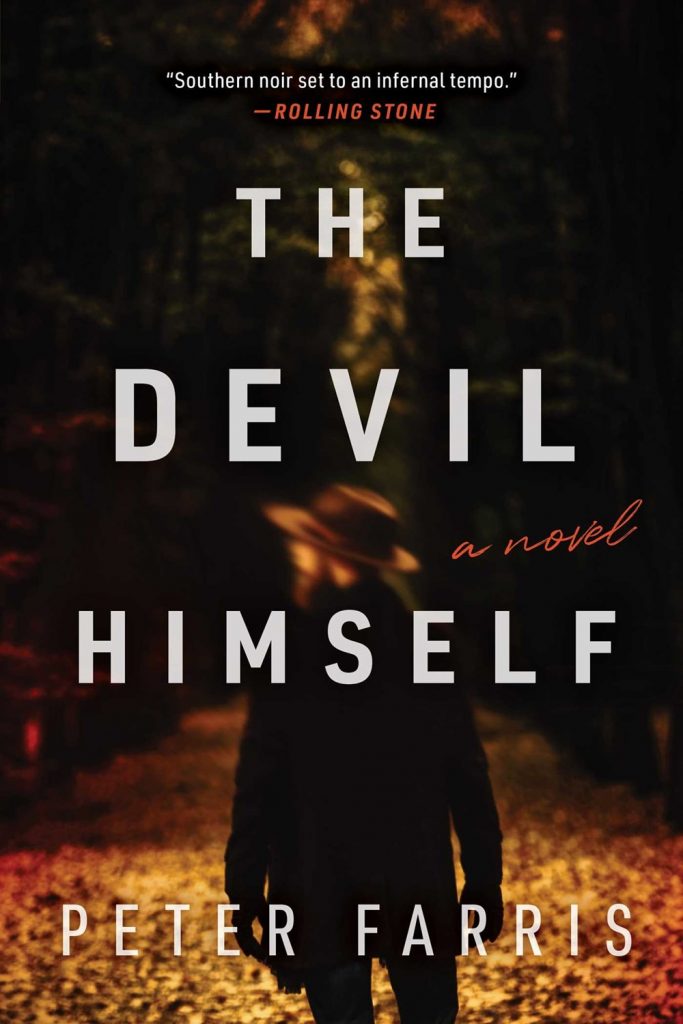 About The Devil Himself

Southern Noir at its finest, The Devil Himself, sizzles with page-burning suspense and bewitching characters. Deep in the forest of South Georgia, barely eighteen-year-old Maya narrowly escapes a savage end. The victim of a vast human trafficking operation managed out of Mexico, Maya had the misfortune to discover the dark plans of a high-ranking client. Her fate seemed sealed, until Leonard Moye, a lonely eccentric who tolerates no one on his land, takes the young woman under his protection. Both having lived lives that have left deep scars, each consumed by anger, they soon develop a bond that makes them, as a pair, a formidable foe, even for hardened criminals and professional scumbags. Maya knows too much and the old man lives on land in the crosshairs of narco machinations. As the heavies seek to finish the job, they find they may be no match for the resourcefulness of a disturbed old man and a cunning young woman.

Written with a skilled combination of breakneck pace and mind-searing detail, Farris has created a wicked and compassionate novel of redemption.

First published in France with enormous critical acclaim and winning multiple literary awards, The Devil Himself will mark Peter Farris as a major crime writer in America as well.

Praise For The Devil Himself

“Learn for yourself what French readers have known for a while now: Peter Farris is a master of hard-nosed Southern noir, a true heir to Larry Brown, Harry Crews, and Tom Franklin. The Devil Himself thunders off the page with beautiful writing and a killer sense of place. It’s urgent, triumphant, and unflinching.”
— William Boyle, author of Shoot the Moonlight Out and City of Margins

“The Devil Himself is a sharp take on a southern gothic fairytale — extra dark and cathartic, just the way I like them.”
—Louisa Luna, author Two Girls Down and the Alice Vega novels

“This is The Good the Bad and the Ugly on nitrous, Peter Farris has written a southern gothic barn-burner, when an aging ex-moonshiner becomes the protector of a young harlot who holds dirt on a local politician, a host of dirty cops and his enforcers bring an avalanche of violence to end her life, as the story deepens so do the plot twists and dark secrets in this epic tale of greed, drug running, redemption and justice.”
—Frank Bill, author of Crimes in Southern Indiana, Donnybrook, The Savage and Back to the Dirt

“It’s fair to say Farris was one of my original inspirations to become a writer. His follow up, The Devil Himself, and his latest novel The Clay Eaters has made Farris an award-winning household name in France and remains to this day one of the single best crime writers I’ve ever read.”
—Brian Panowich, bestselling author of Bull Mountain, Like Lions, and Hard Cash Valley

“Arid lands, loneliness, a strange friendship, Peter Farris’ second novel gives life to a singular world. Part Steinbeck in his way of associating misery and the beauty of the world, and like Lehane as a truth-teller for lost souls.”
—Julie Malaure, LE POINT

“The environment and the atmosphere are vital to the novel…with The Devil Himself, Peter Farris gives us a one-way ticket to south Georgia.”
—Pascale Frey, ELLE

“Peter Farris, with his hard-hitting writing, has found his place among the elite of the current noir landscape.”
—Yan Lespoux, MARIANNE

“From the very first page Farris sets the tone for a pulsing novel, a blaze akin to Jim Thompson and Larry Brown. The Devil Himself is a radical southern noir set to an infernal tempo.”
—Philippe Blanchet, ROLLING STONE

“The Devil Himself is a treat to the noir genre.”
—Karen Lajon, LE JOURNAL DU DIMANCHE

“A violent and intense thriller.”
—L’ALSACE

“We discover a beautiful friendship is at the heart of the novel, full of humanity yet nourished by violence.”
—OUEST FRANCE

“With The Devil Himself, a powerful pen is born.”
—Anne Lessard, LE TELEGRAM

Maya, an eighteen year old in this tale, is in danger from Lucio and all things connected to him including one troublesome entity The Mayor, one of title and status and a need for coverup due to corruption of the worst sense.
These sentences describe her conflict from the beginning pages of the tale:

“Over time Maya learned that it had always been the normal ones who were the greatest danger, these affluent masters of the universe with their warped senses of entitlement. The lawyers or congressmen, actors and athletes who fancied their reflections in a mirror, bewitched by what they saw. Maya couldn’t give a textbook definition of a sociopath, but she understood that they got ahead in life more often than most, and they had the darkest, deepest secrets to bear.
Men with appetites. Usually married. Most of them fathers.
Then there was The Mayor.
Maya was his favorite, at least according to Lucio. The Mayor called her Princess. Kitten. Let her sit on his lap and sniff powder off the nail of his pinky finger. After their first long, sweaty night together, The Mayor asked Lucio for exclusivity, and from that moment on he became her sole client. When he had paid extra to brand her, Lucio didn’t object. There was something peculiar about those two, Maya thought. Lucio and The Mayor shared a history, like half brothers raised in the same home, choosing different paths to reach the same goal—raw power.”

The devil himself is Lucio for his manipulation and putting young girls in harms way, danger and abuse, being used in exchange for currency.
Maya had been sold off by her drug addicted mother at the age of twelve.
Leonard is the main force to protect her in this corrupt wicked world in these pages he develops a concern and care for her as one can read in this sentence: “She felt to him very much like a child, vulnerable, a pawn in the world of treachery and violence” and “He hadn’t given much thought to Maya’s secret, what it meant to the men determined to kill her.”
There are the ingredients that immerses one in this work, the content and right balance of details used has the story flow well.
You become a bystander in the fate of Maya and her search for safety, with characters reminiscent of the conjuring of a Cormac McCarthy and Harry Crews upon an equally devilish landscape, on the run from The Mayor and Lucio in Deep South terrain with a force of reckoning in the being of Leonard, a reader hooked to its final pages with empathic need for justice and redemption.