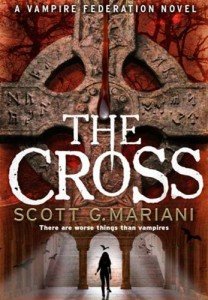 Buy from Amazon.co.uk or Amazon.com
When an ancient cross is discovered in Eastern Europe it becomes a powerful weapon in the war between the trads and the Vampire Federation – but soon, the world is threatened by its discovery…The cross of Ardaich, feared by vampires, was believed to have been destroyed during the bloody war between the Vampire Federation and the Trads. But its accidental rediscovery could be catastrophic.Detective Joel Solomon can’t forgive VF agent Alex Bishop for making him a vampire. Yet when Federation arch-enemy Gabriel Stone enlists a vicious killer to retrieve the cross, the couple and their human allies become the only defence against pure evil.If the cross is used to gain power by the Übervampyr, the sadistic and primeval race of elite vampires, it isn’t just ordinary vampires like Alex and Joel who will be in danger. Things could be about to turn very nasty for the human race…A high-octane, action-packed adventure that will thrill fans of Charlaine Harris, Blade and The Passage

MY REVIEW
The Ubervampyr want world domination and no peace pact with humans. They are creating a new breed of monster. The Vampire federation have a set of rules and one of them is a peace with humans and they wish to live amongst them.
The battle of power once again takes foot and the federation need to take out the bad guys. An old weapon against the vampires has been unearthed a cross. With this in the wrong hands the outcome can only turn out to be fatal.
The author bases most of the story in England which is adds a different twist to the usual settings used in this genre. You will find your usual Human wannabe vampire hunters, a crazed murderer wannabe vampire and the newly turned vampires.
He dishes out a dose of traditional battle sequences with swords, reminiscent of the movie Blade and no steamy boy girl romance scenes. With chapters split by different locations between England and eastern Europe, this is a solid addition to the genre that keeps the pace up right through to the end.

Reviewed by Lou Pendergrast on 15 October 2011