Book Review: The Child Who by Simon Lelic - More2Read

The Child Who by Simon Lelic 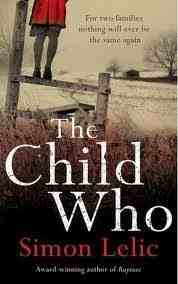 An unimaginable crime and the man who must defend it-a probing psychological thriller from the author of A Thousand Cuts.

A chance phone call throws the biggest muder case in southern England into the hands of provincial attorney Leo Curtice. Twelve-year- old Daniel Blake stands accused of murdering an eleven-year-old girl. But who is truly responsible when one child kills another? As Curtice sets out to defend the indefensible, he soon finds himself pitted against an enraged community calling for blood. When the buildup of pressure takes a sinister turn, he fears for his wife and young daughter’s safety. Must he choose between his family and the life of a damaged child? With piercing psychological insight, Lelic examines a community’s response to a hideous crime.

An engaging story involving a twelve year old boy accused of the murder and rape of a young girl. We follow the solicitor in his taking on of the case and the turmoil and hate he faces representing a young boy accused of murder. The public hate him as they know of his identity and the solicitor is bombarded by hate and finger pointing. His wife and a young daughter soon find themselves having to face problems, due to his high profile and sensitive case. It was an interesting read and gives you a observant eye and thought provoking take on young offenders and crimes. Responsibilities, motives and punishment all come again under the microscope as food for thought.