The Chain by Adrian McKinty - More2Read

The Chain by Adrian McKinty 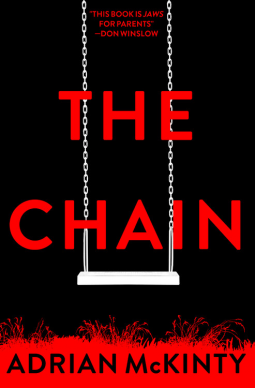 VICTIM.
SURVIVOR.
ABDUCTOR.
CRIMINAL.
YOU WILL BECOME EACH ONE.

A STRANGER HAS KIDNAPPED YOUR CHILD.

TO FREE THEM YOU MUST ABDUCT SOMEONE ELSE’S CHILD.

YOUR CHILD WILL BE RELEASED WHEN YOUR VICTIM’S PARENTS KIDNAP ANOTHER CHILD.

IF ANY OF THESE THINGS DON’T HAPPEN:

YOUR CHILD WILL BE KILLED.

YOU ARE NOW PART OF THE CHAIN

“YOU ARE NOT THE FIRST.
AND YOU WILL CERTAINLY NOT BE THE LAST.”

Praise for The Chain:

“This nightmarish story is incredibly propulsive and original. You won’t shake it for a long time.”
STEPHEN KING

“A masterpiece. You have never read anything quite like THE CHAIN and you will never be able to forget it.”
DON WINSLOW

“One of the finest novels ever produced in the genre – I may not read a better thriller in my lifetime. It just doesn’t get any better than this.”
STEVE CAVANAGH

“McKinty is one of the most striking and most memorable crime voices to emerge on the scene in years. His plots tempt you to read at top speed, but don’t give in: this writing – sharply observant, intelligent and shot through with black humor – should be savored.”
TANA FRENCH

“Diabolical, unnerving, and gives a whole new meaning to the word “relentless”. Adrian McKinty just leapt to the top of my list of must-read suspense novelists. He’s the real deal.”
DENNIS LEHANE

“A grade-A-first-rate-edge-of-your-seat thriller. I can’t believe what went through my mind while reading it.”
ATTICA LOCKE

“Diabolically gripping. Nail-biting, smart, and convincing. Hang on tight, because once you start this book, you can’t stop – you’ll be caught in THE CHAIN.”
MEG GARDINER

“THE CHAIN is the rare thriller that’s not only fiendishly clever but also powerfully empathetic, with both hair-raising twists and complex, fully-realized characters.”
LOU BERNEY

“Brilliant. Beautifully written. It scared the hell out of me but I could not put it down! THE CHAIN belongs in the elite company of world-class thrillers like Gone Girl and The Silence of the Lambs. This is nothing short of Jaws for parents.”
DON WINSLOW

“Pairing an irresistible concept with a winner protagonist, THE CHAIN promises to be your new addiction once you succumb to the first enticing page.”
ALAFAIR BURKE

Adrian McKinty was born and grew up in Belfast, Northern Ireland during the Troubles of the 1970s and 1980s. His father was a boilermaker and ship’s engineer and his mother a secretary. Adrian went to Oxford University on a full scholarship to study philosophy before emigrating to the United States to become a high school English teacher. His debut crime novel Dead I Well May Be was shortlisted for the 2004 Dagger Award and was optioned by Universal Pictures. His books have won the Edgar Award, the Ned Kelly Award, the Anthony Award, the Barry Award and have been translated into over 20 languages. Adrian is a reviewer and critic for The Sydney Morning Herald, The Irish Times and The Guardian. He lives in New York City with his wife and two children.

Reviewed by Lou Pendergrast on 12 April 2019