The Boar by Joe R. Lansdale

The Boar by Joe R. Lansdale 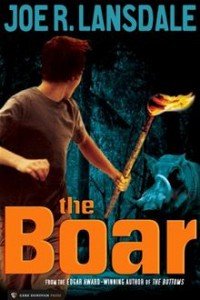 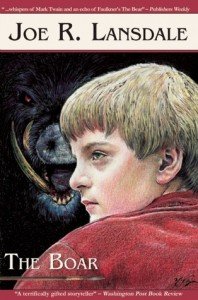 This story takes you into the days of a boys life during the depression era in the year 1933, in the Sabine River Bottoms a menacing and troublesome entity is roaming ‘the devil boar.’

This Boar that the main protagonist has to face up and man up to marks a symbolic transition in the boys steps into becoming a man. The fear of loss and ill health of his loved ones and death he encounters in this story make him step into a whole new sphere of feelings and emotions in the adult world with decisions and responsibilities that he would have never fathomed to be put upon him in his small days.
A boy and his friend, buddies, ready themselves for battle to take on the evil prescience of the devil boar.
These buddies friendship and bond breaks the shackles of prejudices in a friendship that surpasses constrains due to race, religion or status.
Storytelling for all ages with elements that make stories great reading, adventure, discovery, love, the bond of friendship and the innocence of youth.
Lansdale writes with a natural ability in telling stories well, ones that catch the human interest and strike cords connecting with the reality of the reader.
This was an engaging read that was an effortless and heartwarming snippet into the few turbulent days during the youth of one boy.

” We didn’t own many books. The Bible, Moby Dick by Herman Melville, The Call of the Wild by Jack London, and a book of his short stories, The Complete Works of William Shakespeare, The Complete works of Kipling, Huckleberry Finn and Tom Sawyer by Mark Twain, and my all time favourite, A Princess of Mars by Edgar Rice Burroughs.”

“Papa nodded.”Why you want to do that son? Write stories?”
“I just want to,” I said.”I felt like I just got to do it.”
And that was true. The more I thought and talked about it, the more determined I was to be a writer. The idea was comfortable, like drinking a big cup of hot coffee on a cold morning and having it spread around the inside your stomach.”

“Papa always thought that was a bad thing, and told me time and again that a mans colour ought not to have anything to do with his thinking or working. That had to do with the man.
All I knew was that I’d gown up with Abraham and we’d swum the river together and had sword duels with willow limbs and fishes since we were old enough o wander off from the house by ourselves. His colour didn’t seem to make none of those things less fun.”

“That hog is crazy and a born killer. It tore up the best hunter in these parts and left him a cripple. Men have tried to kill it for years without luck. Not putting you down, son, but don’t get to thinking that a youngster like yourself can kill a demon like that.”

“Thing you of to remember,” Uncle Pharaoh started,”is this. You ain’t dealing with no farm hog. This ain’t even no everyday wild hog. This here is a devil hog. Smartest critter I ever seen. Hogs is smarter than dogs, and this hog is smarter than other hogs. This hog is also crazy. He’s got the devil in him, like some folks gets. The way Old Man Turner got it that time.”

“But those eyes. That’s the thing I recall best. They were so pink as to be nearly red, like watery blood. Those eyes alone were enough to make you think that what you were looking at wasn’t any ordinary hog, any wild boar for that matter. Those eves looked old and wise. In that instant, I believed Old Satan was indeed a devil or demon or an Indian medicine man who could shift shapes at will.”

“But there was an old saying that kept hopping around in my head like fresh frog legs in a skillet -“the luck of the devil.”

Review >> All the Earth, Thrown to the Sky by Joe R. Lansdale

The Bottoms by Joe R. Lansdale

My Interview with Joe R. Lansdale


Reviewed by Lou Pendergrast on 24 October 2012