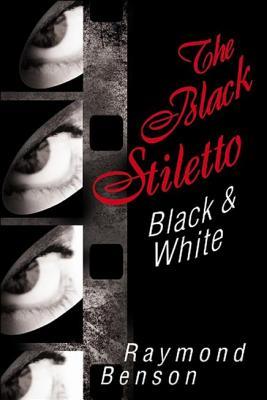 It’s 1959, and Judy Cooper, the Black Stiletto, sets out to confront a dangerous gangster known as the heroin king of Harlem when the teenage daughter of her beloved martial arts instructor ends up a prisoner in an uptown narcotics den.

And the Stiletto has troubles of her own – a shady filmmaker is threatening to reveal her identity to the world – a close friend of her landlord and substitute father may be in cahoots with the Harlem criminals – she’s fighting for racial equality – and she has fallen in love again…this time with an FBI agent who has standing orders to arrest her.

Meantime, in the present, the Stiletto’s son Martin faces his own blackmail crisis when he finds out that there is a second copy of an 8mm film he found in his mother’s strongbox – showing the Black Stiletto unmasked in a film studio dressing room. As he tries to stop the filmmaker’s son’s extortion plot, he learns that his daughter, Gina, has been brutally assaulted in New York City.

The past and the present meet as two shattering climaxes converge.

This is the second book that provides a look back in the life of the vigilante femme-fatale the  black stiletto known as Judy Cooper to a few.
She’s a character that is still rated high in my list of heroines, well there not really a list yet!
This story of her life is delivered in diary form as the debut book was.
She is still out there active fight crimes and helping the innocent. There are a few Nasty characters in this novel. One man she respects and is concerned of is her martial arts teacher, he’s in trouble, his daughter is caught in a web with the wrong crowd. The story covers issues of that era very briefly the era of Elvis and Doris Day, and matters more serious than Hollywood and singing, race riots and racism.
There’s a few new characters in here, one is a black boxer on probation who works at her boxing gym and she finds herself checking out some of his secrets and Judy also finds love in the shape of John but the thing is he works with the F.B.I.
She gets lessons in trust in this novel, who she can and can’t trust.
People will not stop at anything to get what they want, especially when it involves getting hold of the black stiletto.
I enjoyed the characters and the crimes she was pursuing were interesting, but I think that the diary form it was written in was OK in the first book as the black stiletto had an air of mystery about her. Now in book 2 the reader knows a lot about her and so a story form instead of diary would be more deeper and have an added hook in the reading process.
I give this one a 3.5 stars as in it was good, didn’t really like it but liked it.
Long live the black stiletto’s out there.