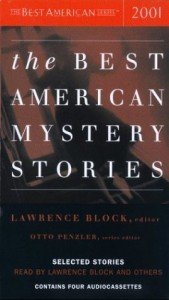 Best-selling author Lawrence Block is one of the mystery genre’s most prolific authors, with more than fifty books to his name, including Hit List, published in 2000. Block’s selections for The Best American Mystery Stories 2001 include stories by such luminaries as Joyce Carol Oates, T. Jefferson Parker, Russell Banks, and Peter Robinson.

The audiobook had less stories than the print version.

There are two really well written stories in here that are such good stories. These two are also my first tasters of these two authors works, one being the recently passed away great writer William Gay and the other of the female writer Joyce Carol Oates. Definitely worth buying this collection just to read those two. Peter Robinson’s’ story is also good and a first of his to read. Lawrence block provides a nice introduction and explains that he selected these from a 100 that the editor selected to choose from.
Its a delight to hear a good short snippet of mystery and thriller read out loud by an author.

The Paperhanger by William Gay
“The vanishing of the Doctors wife’s child in broad daylight was an event so cataclysmic that it forever divided time into the then and the now, the before and the after.”
What an opening and indeed it’s a story of a missing young daughter and a Paperhanger that was working in the home during the day. The doctors wife who finds the Paperhanger as scum and trash really is hiding a deeper attraction of opposites. The search for her has declined later on in time he’s in aid of helping her to find her daughters body, more shocking truths come to light about the Paperhanger. Outstanding story memorable in many ways. Wonderful prose, words chosen so splendid and descriptive. William Gay an author who probably had some much more stories to write sadly passed away. Talent leaves this earth in hundreds.

An Interview with William Gay: http://litreactor.com/interviews/an-interview-with-william-gay

Reviewed by Lou Pendergrast on 19 April 2012