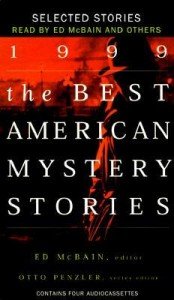 In its brief existence, THE BEST AMERICAN MYSTERY STORIES has firmly established itself as a peerless suspense anthology. Marking the series’ debut in audio with seven selected stories and an introduction by guest editor Ed McBain, this collection features such literary luminaries as John Updike, Lawrence Block, Joyce Carol Oates, and Brendan DuBois. The 1999 audio edition is a spectacular showcase for the high quality and broad diversity of the year’s finest suspense, crime and mystery writing.

There are some really good stories in here also equally read well by Ed McBain himself and other authors. Its a delight to hear a good short snippet of mystery and thriller read out loud by an author.
These are the stories I liked…

Keller a Hitman for hire.
He’s taking up a job of patriotism for a change, a couple of kills for good old uncle Sam.
The thing is who’s the contact and as Keller starts to check out his payee he tries to link to gather the governmental link and the true patriotism of his kills.
This is a great taster and peak into what its seems is be a likeable clean character Keller he seems from this short story not to be a bourbon drinker like that of Scudder, Block’s P.I created character.
This is my first taste into the day in the life of Hitman Keller and it proved to be interesting and humorous, i will read more stories with Keller in the future.

An innocent Bystander by Gary Krist

Intriguing tale of a man and a young girl, the young girl hitches a ride the man gives the ride. One lesson he learns and the reader takes away is think twice next time you decide to offer a ride to strangers. Good story from a writer I have never heard off.

Another good story from an unknown writer. A P.I is hired by a young girl to investigate a missing girl, she doesn’t really want her mother to know. As he knocks on her family door to further find out more her mother goes on the road with her daughter. P.I in pursuit and now things get more complicated as there seems to be some suspicion on the mother due to her rather rapid actions. Very soon the truth shall be known and you wonder this sad fate could really could have happened to any one. What would you have done in her place?

Interesting story featuring an anonymous emailer who wants demands met or threats to  exposure skeletons in the cupboard of those recipients, which they would not want others to learn of their crimes. Someone is also anonymously helping others with hefty cheques to pay scholarships etc. Engrossing crisp little story from another writer I have not heard of until reading this.

Reviewed by Lou Pendergrast on 19 April 2012