The Ballad of the Sad Café and Other Stories by Carson McCullers - more2read.com 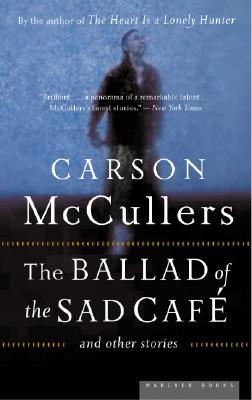 A classic work that has charmed generations of readers, this collection assembles Carson McCullers’s best stories, including her beloved novella The Ballad of the Sad Café.” A haunting tale of a human triangle that culminates in an astonishing brawl, the novella introduces readers to Miss Amelia, a formidable southern woman whose café serves as the town’s gathering place. Among other fine works, the collection also includes Wunderkind,” McCullers’s first published story written when she was only seventeen about a musical prodigy who suddenly realizes she will not go on to become a great pianist. Newly reset and available for the first time in a handsome trade paperback edition, The Ballad of the Sad Café is a brilliant study of love and longing from one of the South’s finest writers.

This is a tale of a cafe that became a hot spot of socializing and good times.
The cafe’s rise and fall, how it’s owner found a wandering hunchback and warmed to him strangely took him in and loved him for all his peculiarity.
One antagonist a criminal, a jailed man has a history with this area and people and is soon to return and wreck havoc.
This was a memorable story with characters that spring to life in the tale, outrageous and you cant help feeling sad for one character and the cafés demise.
That one gem of a lady is no means a weak she is six foot two and can fight and when not fighting punches a punch bag many a time in her backyard.
A ballad of a sad cafe this is indeed but told with a humorous twist in parts.

“There is a type of person who has a quality about him that sets him apart from other and more ordinary human beings. Such a person has an instinct which is usually found only in small children, an instinct to establish immediate and vital contact between himself and all things in the world. Certainly the hunchback was of this type.”

“For the atmosphere of a proper café implies these qualities: fellowship, the satisfactions of the belly, and a certain gaiety and grace of behaviour.”

“Marvin Macy, had no shame in him. He was seen everywhere. During working hours he loafed about the mill, looking in at the windows, and on Sundays he dressed in his red shirt and paraded up and down the road with his guitar. He was still handsome-with his brown hair, his red lips, and his broad strong shoulders; but the evil in him was now too famous for his good looks to get him anywhere. And this evil was not measured only by the actual sins he had committed. True, he had robbed those filling stations. And before he had ruined the tenderest girls in the county, and laughed about it. Any number of wicked things could be listed against him, but quite apart from these crimes there was about him a secret meanness that clung to him almost like a smell. Another thing-he never sweated, not even in august, and that surely is a sign worth pondering over.”

“But no value has been put on human life; it is given to us free and taken without being paid for. What is it worth? If you look around, at times the value may seem to be little or nothing at all. Often after you have sweated and tried and things are not better for you, there comes a feeling deep down in the soul that you are not worth much.”


There are other stories in here, i did not really find them that interesting except one great little story

A mans dilemma a family situation of sorts. He has a wife that has a drinking problem and that is ruining all that is good for him and the children. You feel the sadness, the emptiness and helplessness presented in the families dilemma.

“Absorbed in the instant-the tooth, the bath, the quarter-the fluid passage of child-time had borne these weightless episodes like leaves I the swiff current of a shallow stream while the adult enigma was beached and forgotten on the shore. Martin thanked the lord for that.
But his own anger, repressed and lurking, arose again. His youth was being frittered by a drunkard’s waste, his very manhood subtly undermined. And the children, once the immunity of incomprehension passed- what would it be like in a year or so? With his elbows on the table he ate his food brutishly, untasting. There was no hiding truth-soon there would be gossip in the office and in the town; his wife was a dissolute woman. Dissolute. and he and his children were bound to a future of degradation and slow ruin.”


Reviewed by Lou Pendergrast on 25 October 2012