Strategies Against Nature by Cody Goodfellow 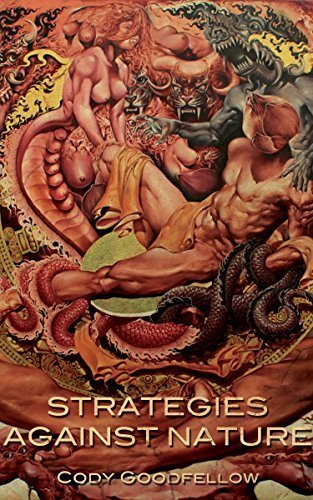 Aging punks recapture the greatest show of their youth through barbaric rituals. The lone survivor of a hellish Interstate pile-up follows an otherworldly sound to its source. A father desperate to cure his daughter’s condition uncovers a multinational corporation’s unspeakable plan for solving world hunger. In these eleven stories, Cody Goodfellow explores the bizarre and the deeply human, using the kaleidoscopic language only he is capable of.

“Brutal, breakneck, and brilliant—Strategies Against Nature grabs you by the throat and drags you under. Don’t even try to resist.”
—Daniel H. Wilson, author of ROBOPOCALYPSE

“The razor acuity of his vision, the deep humanity of his concerns, place Goodfellow in the lineage of Hunter S. Thompson and Michael Shea. For his characters, the world is always ending, sometimes in gaudy, grandiose, over-the-top scenarios that evoke all the best excesses of pop fiction, and sometimes in muted, humble, quieter situations that call to mind the oblique inferences of the avant-garde. There are monsters a-plenty in these pages, but the things Goodfellow’s stories employ evoke the word’s origin in that which is shown.”
—John Langan, author of THE WIDE, CARNIVOROUS SKY AND OTHER MONSTROUS GEOGRAPHIES

“One can certainly see influences of Lovecraft, the New Wave of SF writers of the sixties, the Cyberpunks and Splatterpunks – and even surrealists like Kafka and Borges. Don’t get me wrong though, Cody Goodfellow is one of a kind. Highly Recommended!”
—DARK DISCOVERIES

“‘80s vintage horror with a contemporary edge. An exemplary wordsmith, his prose sticks a needle in your brain and gives it a twist. This stuff is Lovecraft on acid.”
—Laird Barron, author of THE IMAGO SEQUENCE & OTHER STORIES

“Perfect Union is Cronenberg’s The Fly on a grand scale: human/ insect gene-spliced body horror, where the human hive politics are as shocking as the gore. This book would make Marx and Thoreau’s heads explode. In other words, astounding.”
—John Skipp, NY Times Bestselling author of THE LIGHT AT THE END and THE BRIDGE

“Cody Goodfellow has written the two best cross-genre- anthropological-Lovecraftian-military-thriller-stew books ever with Radiant Dawn and Ravenous Dusk. He’s like the Ellroy of speculative fiction . . .”
—Jeremy Robert Johnson, author of SKULLCRACK CITY, WE LIVE INSIDE YOU, and ANGEL DUST APOCALYPSE

“One of the best writers of weird/cosmic horror around.”
—THE MONITOR

These tale come from a great factory of creation, potent prose, myriad of peoples and horrors, nature things laid down one word after the other with a distinct style, voice, and word usage.
With this collection he successfully writes works with horror addressing many real fears, tapping into the subconscious of the reader with memorable masterly crafted stories.

A car incident, there will be mayhem, terrible scenes with original prose style.

At The Riding School

This one was selected for The Best of the Best Horror of the year, edited by Ellen Datlow.
Mythology in the narrative, girls, women, horses and a Madame taking care of girls, hunters raised to kill, with something to go wrong in the tale with this breeding of destruction.

In my interview with him he said about this tale:

“At The Riding School” came out of a girlfriend’s obsession with horseback riding. She once remarked that she knew a lot of girls who breached their maidenheads in the saddle, and having recently read chunks of The Golden Bough, I somehow came up with this idea of a chastity cult that finds a very unusual technique for empowering young girls.

Read more of the interview

“Madame’s school—the Hunt and the Mysteries—made these cast-off girls into women the rest of the world respected, envied. It empowered them to reach for undreamed of heights, and liberated them from ever becoming a man’s creature. And I guess I was one of them, from the day I killed my husband.”

What The Gods Eat

The wilderness, nature in battle with the concrete world, a mans intuition to sculpture something grande, a skill passed down from forefathers.
The rage and anger at the cities despoiling and abuse of nature, and what become of the land, corruption and capitalism of it, and so a darker force unleashed in reply.
Hate borne into creation, creation into destruction, destruction into captivity.

“Maceo Nahuat Xijun had lived in the jungle interior of the Yucatan all his life, and because nobody had ever promised him anything better, he believed that he was happy.”

“The indestructible plastic bottles and wrappers that rained on the ground were not merely trash, but seeds—diabolical harbingers of the alien ecology of metal and plastic and advertising that had already swallowed the coast.”

“Maceo hated the city. His eyes burned with tears that would never quite bloom, and his heart filled with cold lead at the sight and smell of it. The absence of green was an obscenity; the starved, smoke-stained trees in rows along the avenue looked like captives from a genocidal war. The stone of the city was the worst outrage.”

Wasted On The Young

Youth with underground experience a truly out of this world extreme extravaganza awaits new blood.

“My neighbors all hate and fear the kids who hang out in our complex, but I treat them with respect, because I know what they’re about. Where others see wasted potential and wanton self-destruction, I see the essence of orphaned, aborted youth, striving—without love, hope or a voice—to express itself. I see what they could become, given half a chance, and the right moment.”

Fat of The Land

Father and daughter are pawns in a sinister play on corporate corruption and consumerism manipulation and inception of American lives.
The adage we are are what we eat suits this down to a tea.

Reviewed by Lou Pendergrast on 06 April 2019