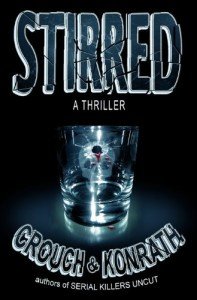 Blake Crouch: So rumor has it this is the last Jack Daniels novel. [Jack also appears in Shot of Tequila, Shaken, Serial Killers Uncut, and Flee.]

J.A. Konrath: Rumor also has it this is the last Andrew Z. Thomas/Luther Kite novel. [They also appear in Desert Places, Locked Doors, Break You, and Serial Killers Uncut.]

BC: So…are the rumors true?

JAK: You tell me.

JAK: Well, what if they offered us a lot of money to write another book?

BC: No way. We’ve discussed this. We’re done. But just for the sake of argument–how much are we talking?

JAK: Lots. Like they pull up in a dump truck filled with twenties.

BC: And just to be clear, we’re talking about a real dump truck, right? It’s not gonna be this trick where I agree and then someone shows up with a Tonka.

JAK: No, totally real. We could roll around in the cash, like Demi Moore and Woody Harrelson in Indecent Proposal. Just so we’re clear, I’d be Woody.

BC: I’m sure you would. But the answer is still no.

JAK: Why? I thought we had a blast writing this book. Didn’t you have a good time with Stirred?

BC: It was too much fun. And I love these characters, but it’s time to move on. All good things…

JAK: We spent countless hours laughing like schoolgirls while we were writing this. And we went full throttle with nail-biting scenes of horror and suspense. I know it’s a cliché, but Stirred is a pin-you-to-your-seat emotional rollercoaster. Laughs, scares, tears, suspense, excitement…

JAK: And we’ve already heard from a lot of readers who think this is the best book either of us have ever written–together or solo.

BC: I’ll admit, this book turned out really kick-ass. But still–we’ve written 1.85 million words in what we call the Crouch/Kilborn/Konrath universe. Don’t you think that’s enough?

JAK: What if you and I have to write another book together about these characters or else we’re going to be executed at dawn by firing squad?

BC: Firing squad isn’t actually a bad way to go.

JAK: Are you nuts? It’s death! As in no more life!

JAK: Why should that even matter?

JAK: So I’m supposed to take one for the team just because you’re so selfish you can’t even acknowledge to our millions of fans that maybe we can write another one of these books?

BC: But you’ll get a last request! How cool is that? And they have to give you whatever you want.

JAK: What if I want us to write another book?

BC: Wouldn’t work. They’re shooting you at dawn. How about a blindfold? That’s a standard request.

JAK: How about if I request that they shoot you instead?

BC: See, now you’re violating the spirit of the last request. Which means you won’t get one.

JAK: Look, it’s true that some characters die in Stirred. But maybe, sometime in the future, we should at least keep the possibility open that we might do another book. C’mon. Please?

BC: Dude, I’m just messing…of course we should write more. We get fan mail all the time about these books, and we shouldn’t disappoint our fans. There’s actually a lot more story to tell and plenty of characters who still have a pulse, and the writing experience is just too much fun. So what do you say? Are we doing this or what?

JAK: No way. We already talked about this. We’re done, buddy. Game over.

MY REVIEW
A finale to the Jack Daniels series created by Konrath and a finale to the Luther Kite and Andrew Z Thomas by Blake Crouch. I have yet to read any previous books from the series, with a newly found guilt. Whiskey sour, the beginning of The Jack Daniel’s Detective series, has been gathering some undue dust on the shelf and after reading the end line of her career in this novel I only wished to have had a sample of her detective work in upholding the law. The mind of Luther kite is some what one that one could visit again after reading this story, via previous novels. Knowledge of past novels in the series is not a must to enjoy this thrill ride but would further enjoy the experience.
Since The pairing of the villain Hannibal Lecter and FBI agent Clarice Starling, the healthy duo of heroine and villain has been often repeated but never really matched, but in this novel the two authors have created a good competition . The villain is one screwed up one to say the least he thrives on watching his prey wither in pain bit by bit and suffer a slow death. He does not want Jack to die immediately but watch her suffer slowly and has set some traps in this story that really surpasses many serial killer/crime novels.
The authors have used all the new modern age media, one being the kindle and location points instead of page numbers in clues to crimes. The villain is obsessed with Dante’s Inferno and constructs his methods of torture around its levels of hell.
This story was thoroughly enjoyable to read and really all the cliche terms can be used like page turning, thrill ride and a high octane read.

Reviewed by Lou Pendergrast on 30 November 2011