Review: Song for the Unraveling of the World by Brian Evenson - More2Read

Song for the Unraveling of the World by Brian Evenson 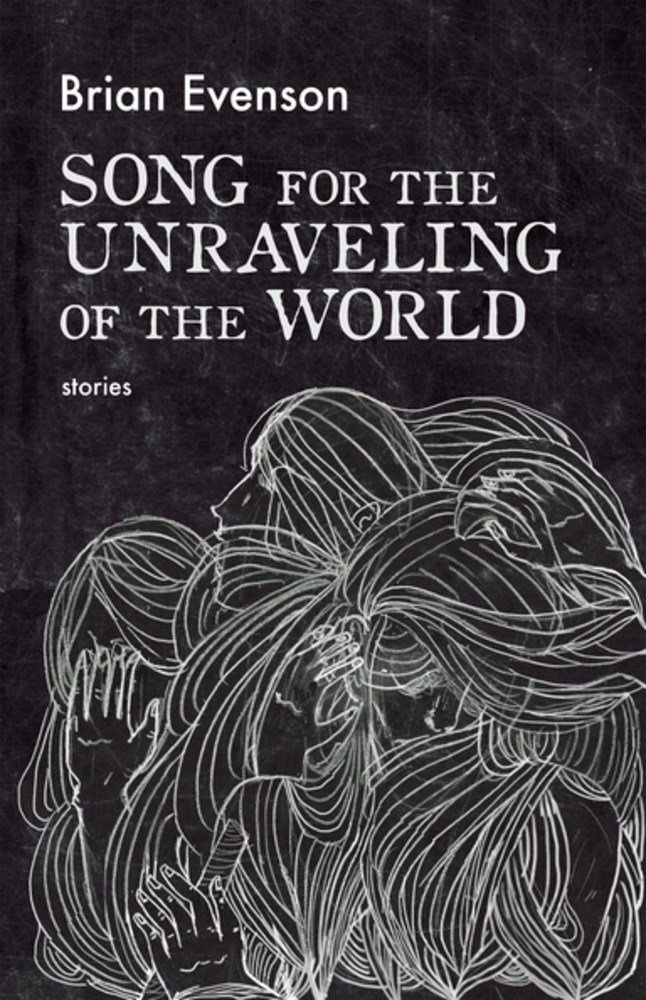 FROM A MODERN MASTER OF THE FORM, A NEW SHORT STORY COLLECTION THAT DEXTEROUSLY WALKS THE TIGHTROPE BETWEEN LITERARY FICTION, SCI-FI, AND HORROR.

A newborn’s absent face appears on the back of someone else’s head, a filmmaker goes to gruesome lengths to achieve the silence he’s after for his final scene, and a therapist begins, impossibly, to appear in a troubled patient’s room late at night. In these stories of doubt, delusion, and paranoia, no belief, no claim to objectivity, is immune to the distortions of human perception. Here, self-deception is a means of justifying our most inhuman impulses—whether we know it or not.

Praise for Song for the Unraveling of the World:

“These stories are carefully calibrated exercises in ambiguity in which Evenson (Windeye) leaves it unclear how much of the off-kilterness exists outside of the deep-seated pathologies that motivate his characters.”
—Publishers Weekly, starred review

“Brian Evenson is one of my favorite living horror writers, and this collection is him at his eerie and disquieting best.”
—Carmen Maria Machado

“Evenson recalls Poe, as he finds the most frightening way to open another box of horrors.”
—Brooklyn Rail

“Terrifying, full of paranoia and delusion and at the same time haunting and beautiful.”
—The Bibliophile Librarian

“Evenson walks the literary vs genre tightrope, uses minimalist prose to great effect, and has a sharp eye for application of conventions.”
—Signal Horizon

“To read Evenson is to be privy to a precise, vivid, brilliant unpicking of the everyday—and its others.”
—China Miéville

“Evenson goes to great lengths to undermine, to deterritorialize, to estrange us from our linguistic and ontological habitats. He breaks the iron grip of realism and peels back the monstrous underbelly of life.”
—Black Warrior Review

“Brian Evenson’s bold and unique short fictions—equal parts surrealism, ontology, and dread—consistently lead the reader to truly shocking discoveries that are as disturbing as they are oddly beautiful. Song for the Unraveling of the World is a map of our paranoia- and anxiety-riddled, existentially challenged, pre-apocalyptic times.”
—Paul Tremblay

“Evenson’s fiction is equal parts obsessive, experimental, and violent. It can be soul-shaking.”
—The New Yorker

“Some of the stories here evoke Kafka, some Poe, some Beckett, some Roald Dahl, and one, a demonic teddy-bear chiller called ‘BearHeart™,’ even Stephen King, but Evenson’s deadpan style always estranges them a bit from their models: He tells his odd tales oddly, as if his mouth were dry and the words won’t come out right.”
—The New York Times Sunday Book Review

“Evenson’s stories, small masterworks of literary horror, are elegantly tense. They operate in psychological territory, never relying on grossness or slasher silliness to convey their scariness. . . . For the Stephen King fan in the house: an author as capable, if a touch less prolific.”
—Kirkus Reviews

“Admirers of Evenson (Windeye; Altmann’s Tongue) applaud the edge he maintains between the unexplained and the intimate. This latest collection continues to explore that line, and for how much is left obscured, an eerie emotional echo remains. . . . Evenson’s journey along the boundaries of short fiction make for an eye-opening dissection of the form.”
—Publishers Weekly

“You never realize how deep his fiction has wormed its way into your brain until hours, days, even weeks later, when you’re lying in the dark and Evenson’s images come flooding back, unbidden. A Collapse of Horses will stay with you for a long time . . . whether you want it to or not.”
—Chicago Review of Books

“While each piece in A Collapse of Horses stands alone as a tale that combines ‘literary’ and ‘horror’ elements in novel ways that blur genre distinctions, the collection intensifies as recurring motifs flow through the various narratives, settings, and fictional psyches: bodily and mental disintegration, the ambiguities of human physicality and consciousness, and the permeable borders between self and other.”
—Los Angeles Review of Books

“A Collapse of Horses is a perennially dusty, dark, haunted house of atmospheric dilemmas whose plots continually reverse a reader’s expectations.”
—The Collagist

“Evenson is interested in philosophy and semiotics, the impossibility of ever truly knowing or naming the world, and our fundamental, helpless dependence on what our senses tell us. . . . . [His stories] are a wonderful feat of the uncanny.”
—Los Angeles Review

Girl with no face,
therapy, therapists and being born still,
fathers search for daughter missing with hint of her singing there but not there,
reflections on parents and a sister dead,
a strange home and dilemma,
filmmaking by any means necessary,
Hrafndis stragglers and the tower,
a guy with gold suite and face on wrong side of his head,
Man feeling.. someone is watching me,
Crew gone expect one or two in a vessel the Vorag in the universe,
to a man have hard time believing one is his sister,
to name a few, a collection of thought provoking speculative snippets and scenes contained within this collection.
Complexities, oddities, and fates, taken to different realms and worlds, a myriad of characters created with various themes including the wonderfully weird involved, visionary works, enter The Brian Evenson Zone!

Brian Evenson is the recipient of three O. Henry Prizes and has been a finalist for the Edgar Award, the Shirley Jackson Award, and the World Fantasy Award. He is also the winner of the International Horror Guild Award and the American Library Association’s award for Best Horror Novel, and his work has been named in Time Out New York’s top books.