Review: Something Wicked This Way Comes by Ray Bradbury - More2Read

Something Wicked This Way Comes by Ray Bradbury 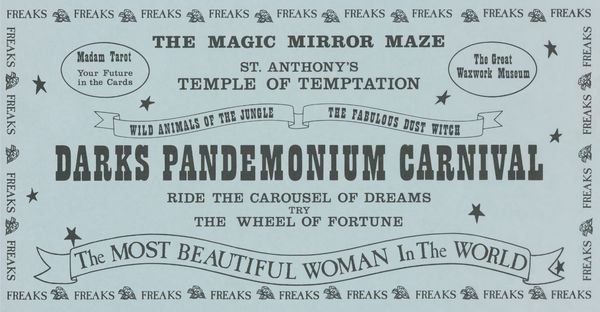 The Dark carnival is coming to town.

Two boys and a father are the towns only hope.

If only out of fear you stay home and not go down to the fair ground tonight for the dark man awaits.

Two buddies, boys, they live next to each other and can see each others bedroom window when needed. Friends born two minutes apart, one 1min before midnight October 30th, and the other 1min after midnight, October 31st, Halloween.
I loved the father son relationship in this story between Will and his father Charles Halloway. His father has a level of understanding boys and there needs, he acknowledges his sons growing up testing the waters of limitations in his obedience.

A darkly poetic page-turning story with an elegant prose style, evoking great sense of place and nostalgia.
When you visit a maze or hall of mirrors again after reading this you will be reflecting back to this dark carnival that you have paid visit to by way of Ray Bradbury.
A timeless story that is high up many readers lists of all time reads and that holds significant inspiration in writers pursuit in writing a story for the masses.
As I finished re-reading it I can’t help thinking I be paying a visit again to this treasure trove of weirdness, mystery and darkness involving weird characters of the carnival, two youthful buddies and a father. The illustrated Man a really interesting character and probably in my next stop after reading this i will be paying a visit to his novel ‘The Illustrated Man,’ a collection of stories involving a tattooed man similar to that of the Illustrated Man/The Dark Man in this tale.
This one keeps you turning the pages with the fate of two friends in mind.

Ray Bradbury says in his afterword…
“Disney created Disneyland as a bright antidote. He made a new world. I finished a novel, with Mr. Electro at its centre, changed from a kind Christian mystic into an unfailing evil Cooger and Cooger an Dark’s Pandemonium Shadow Show.”

If you ever happen to notice a carousel at a funfair rotating backwards and music being played backwards steer well clear of the ride. For that backward ride, a carousel, of a carnival is driven probably by dark feelings, fear and anger.

“A carnival should be all growls, roars like timberlands stacked, bundled, rolled and crashed, great explosions of lion dust, men ablaze with working anger, pop bottles jangling, horse buckles shivering, engines and elephants in full stampede through rains of sweat while zebras neighed and trembled like cage trapped in cage.
But this was like old movies, the silent theatre haunted with black-and-white ghosts, silvery mouths opening to let moonlight smoke out, gestures made in silence so hushed you could hear the wind fizz the hair on your cheeks.”

“In the meadow, the tents, the carnival waited. Waited for someone, anyone to wade along the grassy surf. The great tents filled like bellows. They softly issued forth exhalations of air that smelled like ancient yellow beasts.
But only the moon looked in at the hollow dark, the deep caverns. Outside, night beasts hung in midgallop on a carousel. Beyond lay fathoms of Mirror Maze which house a multifold series of empty vanities one wave on another, still, serene, silvered with age, white with time. Any shadow, at the entrance, might stir reverberations the Olof of fright, unravel deep-buried moons.
If a man stood there would he see himself unfolded away a billion times to eternity? Would a billion images look back, each face and the face after and the face after that old, older, oldest? Would he find himself lost in a fine dust away off deep down there, not fifty but sixty, not sixty but seventy, not seventy but eighty, ninety, ninety-nine years old?
The maze did not ask.
The maze did not tell.
It simply stood and waited like a great arctic floe.”

” ‘Three….’
Three in the morning, thought Charles Halloway, seated on the edge of his bed. Why did the train come at that hour?
For, he thought, it’s a special hour. Women never wake then, do they?
They sleep the sleep of babes and children. But men in middle age?
They know that hour well. Oh God, midnights not bad, you wake and go back to sleep, one or two’s not bad, you toss but sleep again. Five or six in the morning, there’s hope, for dawns just under the horizon. But three, now, Christ, three A.M.! Doctors say the body’s at low tide then. The soul is out. The blood moves slow. You’re the nearest to dead you’ll ever be save dying. Sleep is a patch of death, but three in the morn, full wide-eyed staring, is living death! You dream with your eyes open. God, if you had strength to rouse up, you’d slaughter your half-dreams with buckshot! But no, you lie pinned to a deep well-bottom that’s burned dry. The moon rolls by to look at you down there, with it’s idiot face. It’s a long way back to sunset, a far way on to dawn, so you summon all the fool things of your life, the stupid lovely things done with people known so very well who are now so very dead-And wasn’t it true, had he read it somewhere, more people in hospitals die at 3 A.M than at any other time…?”

“The music, thought Will, what was it? And how do I know it’s backside first? He hugged the limb, tried to catch the tune, then hum it forward in his head. But the brass bells, the drums, hammered his chest, revved his heart so he felt his pulse reverse, his blood turn back in perverse thrusts through all his flesh, so he was nearly shaken free to fall, so all he did was clutch, hang pale, and drink the sight of the backward-turning machine and Mr Dark, alert at the controls, on the sidelines.
It was Jim who first noticed the new thing happening, for he kicked Will, once, Will looked over, and Jim nodded frantically at the man in the machine as he came around the next time.
Mr Cooger’s face was melting like pink wax.
His hands were becoming dolls hands.
His bones sank away beneath his clothes; his clothes then shrank down to fit his dwindling frame.
His face flickered going, and each time around he melted more.
Will saw Jim’s head shift, circling,
The carousel wheeled, a great back-drifting lunar dream, the horse thrusting, the music in-grasped after, while Mr Coogar, as simple as shadows, as simple as light, as simple as time, got younger. And younger. And younger.”

” ‘An old religious tract. Pastor Newgate Philips, I think. Read it as a boy. How does it go again?’
He tried to remember. He liked his lips. He did remember
‘For some, autumn comes early, stays late through life where October follows September and November touches October and then instead of December and Christ’s birth, there is no Bethlehem Star, no rejoicing, but September comes again and old October and son on down the years, with no winter, spring, or revivifying summer. For these beings, fall is the ever normal season, the only weather, there be no choice beyond. Where do they come from? The grave. Does blood stir their veins? No: the night wind. What ticks in their head? The worm. What speaks from their mouth? The toad. What sees from their eye? The snake. What hears with their ear? The abyss between the stars. They sift the human storm for souls, eat flesh of reason, fill tombs with sinners. They frenzy forth. In guts they beetle-scurry, creep, thread, filter, motion, make all moons sullen, and surely cloud all clear-run waters. The spider-web hears them, trembles- breaks. Such as the autumn people. Beware of them.’ “

” ‘Riding that merry-go round they shave off a year or two, any time they want, right?’
‘Why, then–‘ The abyss opened at Wills feet -‘they could live forever!’
‘And hurt people.’ Jim turned it over, again and again.’But why, why all the hurt?’
‘Because,’ said Mr Halloway.’You need fuel, gas, something to run a carnival on, don’t you? Women live off gossip, and what’s gossip but swap of headaches, sour spit, arthritic bones, ruptured and mended flesh, indiscretions, storms of madness, calms after the storms? If some people didn’t have something juicy to chew on, their choppers would prolapse, theirs souls with them. Multiply their pleasure at funerals, their chuckling through breakfast obituaries, add all the cat-fight marriages where folks spend careers ripping skin off each other and patching it back upside around, add quack doctors slicing persons to read their guts like tea leaves, square the whole dynamite factory by ten quadrillion, and you got the black candlepower of this one carnival.
‘All the meannesses we harbour, they borrow in redoubled spades. They’re a billion times itchier for pain, sorrow, and sickness than the average man. We salt our lives with other peoples sins. Our flesh to us tastes sweet. But the carnival doesn’t care if it stinks by moonlight instead of sun, so long as it gorges on fear and pain. That’s the fuel, the vapor that spins the carousel, the raw stuffs of terror, the excruciating agony of guilt, the scream from real or imagined wounds. The carnival sucks that gas, ignites it, and chugs along its way.’ “

“Somewhere in the recumbent solitudes, the motionless but teeming millions of books, lost in two dozen turns right, three dozen turns left, down aisles, through corridors, toward dead ends, locked doors, half-empty shelves, somewhere in the literary soot of Dickens’s London, or Dostoevsky’s Moscow or the steppes beyond, somewhere in the vellumed dust of atlas or Geographic, sneezes pent but set like traps, the boys crouched, stood, lay sweating a cool and constant brine.
Somewhere hidden, Jim thought: He’s coming!
Somewhere hidden, Will thought: He’s near!
‘Boys….?’ “ 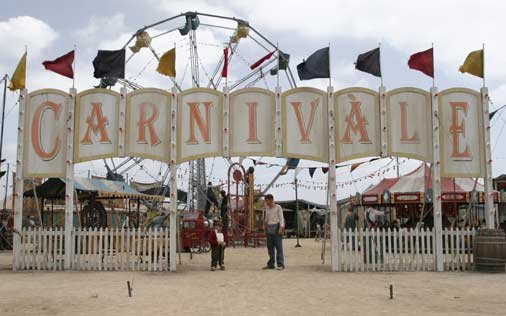 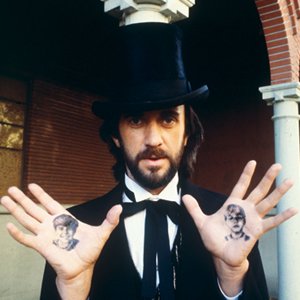 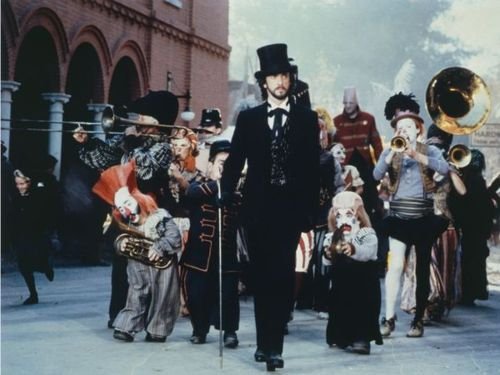 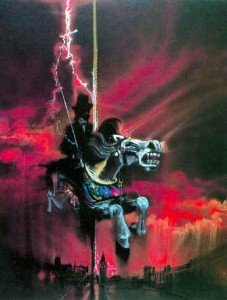