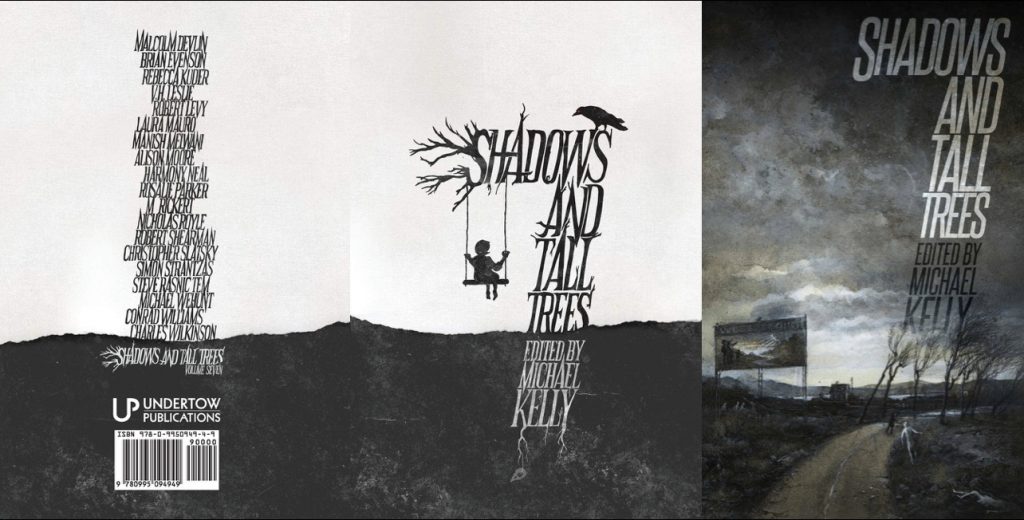 The acclaimed literary anthology Shadows & Tall Trees has featured authors short-listed for the Man Booker Award, and World Fantasy Award winners. Several of our stories have been reprinted in “Year’s Best” anthologies and have garnered numerous award nominations. This volume features all-original new fiction from these masters of weird fiction:

Praise For Shadows and Tall Trees

“Michael Kelly’s Shadows and Tall Trees is a smart, soulful, illuminating investigation of the many forms and tactics available to those writers involved in one of our moment’s most interesting and necessary projects, that of opening up horror literature to every sort of formal interrogation. It is a beautiful and courageous series.”
-Peter Straub

Shadows & Tall Trees is one more demonstration of why so many critics are talking about a renaissance of English-language dark and fantastic fiction. Thoroughly recommended.
-Teleread

As the stories are read, gradually, reviews will conjugate and appear over March, one hopes.

Engines of the Ocean by Christopher Slatsky

A case of shady and obscure memories with an absorbing haunting tale of discoveries with a curious Cordelia traveling back to her childhood home.

This tale can be found in his new collection The Immeasurable Corpse of Nature, where I read this also.

“That room in the basement. The stuff of childhood terrors. She’d never actually entered it, only glimpsed the brick-lined interior on those rare occasions the door had been left ajar. The unpleasant scent of the space was forever in her memory. A sweaty residue—or was it more like the ocean?The room had always been off-limits. It was where her father wrote his ideas down, sketching various machine designs as a hobby. A frustrated engineer, relegated to a field service technician position for the city’s water department, she’d never seen any of his finished projects actually operating. The weird machines of unknown function never made it from the page to fruition, and nothing ever led to a promotion.”

“The mind was an unreliable thing, all too often preserving dark moments while neglecting the joyful. There was some light in between the cracks of a dreary childhood, and most were illuminated by their adventures at the ocean.”

“She’d fallen into the uncanny valley of sentiment, a childhood imperfectly replicated.”

You are immersed in a pasture of a strange weird future. There is something out there in this desert, a kind of animal running wild killing, there will be blood and love in this tale.
A ferocious terrible beauty tale laid down with splendid writing in a potent love ballad.
I can see why this was a finalist for the Shirley Jackson award, one of the best of her collection, where I also read this, in  Sing Your Sadness Deep.

“The men came a few days later. They arrived in a rust-coloured station wagon, kicking up plumes of dust behind them like the tail of a comet.”

“A dry wind had picked up, casting fistfuls of sand like a spiteful child.”

“Every day I feared your absence less and less; you were like the tide, receding into the gloaming, returning again as the sun set. I had not planned for the eventuality that, someday, you might not come back; curiously, I had no desire to prepare for it. It was as though after a life spent preparing fastidiously for a future that might never come, I had finally learned to absorb the present; you had taught me, somehow, that the sum total of my existence could not be pared down to numbers on a spreadsheet: how many tins, how many bullets, how fast I could run, how many weeks I might survive.”

In the Tall Grass by Simon Stranzas

Woman out with sweat and toil on the field befriending another.
Evoking scene and feeling with earth and soul, loss and loneliness.
There be greatness of friendship and love in smaller dimensions of our realm in the hardest times.
An originally told hypnotically warm terrible beauty of a poetic read.

“Baum emerges from the grass while Heike works on her truck, shirtsleeves folded to above her elbows. She hears the snap of a thousand twigs and turns her grease-smeared face to find Baum crying, crooked arms spread wide. The smell of new green wafts from him while light diffuses through his foliage, dappling shadows over her face.”

“The jagged cityscape rises from the horizon as the forest had, but with concrete taller than trees and lights brighter than fireflies. It looks grand and endless, but Baum finds little excitement in seeing such a vast monstrosity.”

“Death robs so much from everyone, stopping only when there is nothing left worth taking.”

Reviewed by Lou Pendergrast on 16 March 2021