Book Review: Sefira and Other Betrayals by John Langan - More2Read

Sefira and Other Betrayals by John Langan 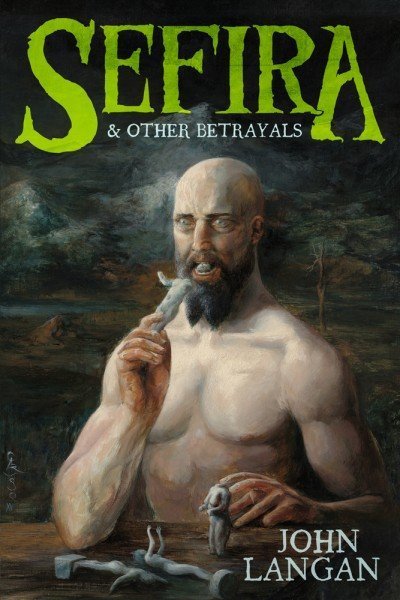 From the award-winning writer of The Fisherman comes a new collection of stories. A pair of disgraced soldiers seek revenge on the man who taught them how to torture. A young lawyer learns the history of the secret that warped her parents’ marriage. A writer arrives at a mansion overlooking the Hudson River to write about the strange paper balloons floating through its grounds. A couple walks a path that shows them their past, present, and terrible future. A woman and her husband discover a cooler on the side of the road whose contents are decidedly unearthly. A man driving cross country has a late-night encounter with a figure claiming to be the Devil. And in the short novel that gives the collection its title, a woman chases a monster in a race against time.

Praise for Sefira and Other Betrayals:

“This book is a treasure trove for lovers of literary horror fiction.”—Publishers Weekly (Starred Review)

Langan’s first tale Sefira, tragedy with betrayal in the narrative.
Wife and husband, Lisa and Gary, moved to Hudson Valley, Newburgh, marriage split apart due to a mans falling to lust, forbidden desires, and wildest fun promised by Sefira.
There becomes more at stake in this tale.
Lisa Martinez is on the road driving to something, farther afield, a fate, with monstrous transformations, a psychological suspense metamorphosing into a real horror.
Lisa can kick ass and will not succumb and give up easily to the forces trying to stop her quest.
A pursuit tale of betrayal on the road in search of some payback, all that may make one think twice in the acts of betrayal.

Another captivating tale that stood out for me was Bloom.
Hey I would like my box back please my property in there, I need it. What was you thinking why couldn’t you just leave it there and pass it by?
A couple decide to be charitable and take something from one place to another, a cooler.
A bad move and with that comes the trepidation of what becomes, ones she dreams, strange ones parallel with reality unravelling in surreal circumstances part of something bigger.

Third and final selection from this collection for me that is a must-read, At Home in the House of the Devil.
A man studying many devil aspects to an obsessive level.
After time his obsession and addiction became sated for a time with other things drugs and more immediate passions, with betrayal with a cost.
Descent into darkness, bad things and unexpected encounters.
“I studied that dark figure for what felt like hours at a time, for what must have amounted to days. Never directly: from the moment I first understood what the statue, tucked between the empty bottle of Ardbeg and the framed photograph of Devil’s Rock, showed was afraid to let my gaze travel any lower than St. Michael’s knee.
My fear arose from an awareness that I shouldn’t be so interested in the Devil, which overlay a more primitive concern that if I stared directly at him, he would notice me, and, irritated that he had been seen in such a humiliating pose, carry me off to Hell.”

These three my recommendations, must-reads, Sefira, Bloom, and At Home in the House of the Devil.
He knows how to conjure darkness in a tale, with many story ingredients, spiralling and descending into something unfathomable, whipping the words and evoking the obscure.
Bring on more John Langan! Will be reading The Fisherman and The Wide, Carnivorous Sky and Other Monstrous Geographies soon.

Reviewed by Lou Pendergrast on 29 March 2019