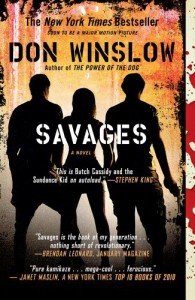 A breakthrough novel that pits young kingpins against a Mexican drug cartel, Savages is a provocative, sexy, and sharply funny thrill ride through the dark side of the war on drugs and beyond.

Part-time environmentalist and philanthropist Ben and his ex-mercenary buddy Chon run a Laguna Beach–based marijuana operation, reaping significant profits from their loyal clientele. In the past when their turf was challenged, Chon took care of eliminating the threat. But now they may have come up against something that they can’t handle—the Mexican Baja Cartel wants in, and sends them the message that a “no” is unacceptable. When they refuse to back down, the cartel escalates its threat, kidnapping Ophelia, the boys’ playmate and confidante. O’s abduction sets off a dizzying array of ingenious negotiations and gripping plot twists that will captivate readers eager to learn the costs of freedom and the price of one amazing high.

Following “the best summertime crime novel ever” (San Francisco Chronicle on The Dawn Patrol), bestselling author Winslow offers up a smash hit in the making. Savages is an ingenious combination of adrenaline-fueled suspense and true-crime reportage by a master thriller writer at the very top of his game.

“Something they don’t teach you at Harvard Business School.
‘Savages, How to Deal With.’
Savagely.”

The Good, The Bad and the Ugly an infamous trio the three amigos and the three stooges funny trios. When it comes to threesome there are many one trio you will soon be taking note of are the likes of Ben, Chon and the wonderful O or her real name Ophelia, in this Drug cartel solid thriller from Don Winslow.
The story is about lucrative money making with a specially brewed drug herb that the trio or really Ben and Chon deal and solely profit from. Others want a cut of this market and Ben and Chon are just not having it. They have more than enough money and want to get out of the drug world and retire on sunnier sands. As always with a woman involved matters can get personal and you are taken to the knife-edge of showdowns. The boys need to have their killing skills at full capacity to keep what they love. The other big boy in the drug cartel is really one big girl Elena the last line of a drug mafia family who is just as brutal as any man. She also has something precious in the swing of matters a daughter Paqu.

Just discovered that this highly charged full throttle drama is to be released as a movie in 2012 directed by Oliver Stone and has a full cast of good actors with Pulp fiction team Travolta and Thurman acting the part of Dennis and Paqu. It will make one hell of a movie, I heard Oliver stone was writing the screenplay before the book was published. Another of Winslow’s books that I hope to read soon that is to be adapted is Satori and will have Di Caprio starring in it.

The novel is written with the right pace and flows well, easy to read not a mind storm to get through, I cant fault it at all. There is, for those who would like to know, plenty of dark humour and explicit situations. You do get to learn a lot about cannabis in this novel. What that really makes it so good are the characters Don has created and the trio that will forever be a bond to remember. You will take away a lesson on savagery and savages from this story and oh yes how to make, Mucho Dinero.

“Ben is a self-described Baddhist, i.e., a ‘bad Buddhist,’ because he sometimes eats meat, gets angry, rarely meditates, and definitely does consciousness-altering substances. But the basics of Buddhism, Ben is down with- Do no harm. Which Ben articulates as Don’t f*** with people. And he doesn’t think the Dalai Lama would argue with that.”

“They became almost cult like figures. There developed such a devoted following with such a religious loyalty that they even gave themselves a name. The Church of the Lighter Day Saints.”

“Chon like shooting guns. He likes the feel of metal in his hands, the kick, the blowback, the precision of chemistry, physics, and engineering mixed with hand-eye coordination. Not to mention power-shooting a gun projects your personal will across time and space in a flash. I want to hit that and that is hit. Straight from your mind to the physical world. Talk about your PowerPoint presentations.”

Reviewed by Lou Pendergrast on 08 December 2011