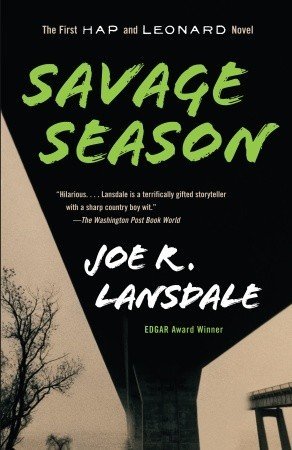 Start with two best friends who practice martial arts in their free time: one a straight white guy, the other a black gay guy. Add a conniving ex-wife in a blue-jean miniskirt. Throw in half a million in a muddy creekbed somewhere near the Sabine River in East Texas. Add an ex-radical from the ’60s and two naive idealists who want to save the world. Mix them all together in a half-assed plan, season with double-crosses, and then top it off with a hilarious and chilling drug dealer named Soldier. Bloody mayhem a la Lansdale.

Hap a tough country boy with iron foundry muscles just spent eighteen months in prison, during this time his wife Trudi was filing for divorce.
Leonard a Vietnam vet and a certified hardhead. His expertise is Martial arts, boxing, kenpo and hapkido.
Trudi ruled men with brains, passion and her downy triangle.
Hap a bird lover.
Leonard a dog lover.
An inseparable duo of characters.

On his release from prison Trudi temps Hap into a money making deal or shall we say money finding.
A bank job money stash needs to be recovered and she wants Hap to to find it and get a cut. Thing is, its an idea coming from Trudi’s other lover. Things don’t pan out as they should. Along down the line Revolutionaries and gun deals come into the picture and matters get a whole lot more complicated for Hap and Leonard.
This was a good promising starter to a series of books involving the characters Hap and Leonard. They are fun guys to be around and when they need to be serious and get the job done they get it done properly.

Reviewed by Lou Pendergrast on 11 February 2012