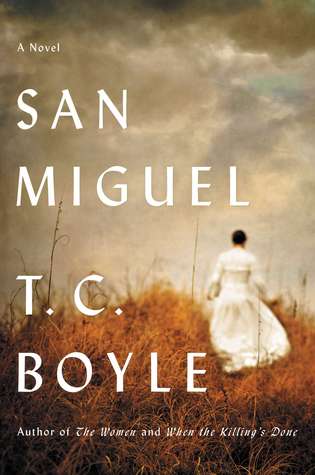 On a tiny, desolate, windswept island off the coast of Southern California, two families, one in the 1880s and one in the 1930s, come to start new lives and pursue dreams of self-reliance and freedom. Their extraordinary stories, full of struggle and hope, are the subject of T. C. Boyle’s haunting new novel.

Thirty-eight-year-old Marantha Waters arrives on San Miguel on New Year’s Day 1888 to restore her failing health. Joined by her husband, a stubborn, driven Civil War veteran who will take over the operation of the sheep ranch on the island, Marantha strives to persevere in the face of the hardships, some anticipated and some not, of living in such brutal isolation. Two years later their adopted teenage daughter, Edith, an aspiring actress, will exploit every opportunity to escape the captivity her father has imposed on her. Time closes in on them all and as the new century approaches, the ranch stands untenanted. And then in March 1930, Elise Lester, a librarian from New York City, settles on San Miguel with her husband, Herbie, a World War I veteran full of manic energy. As the years go on they find a measure of fulfillment and serenity; Elise gives birth to two daughters, and the family even achieves a celebrity of sorts. But will the peace and beauty of the island see them through the impending war as it had seen them through the Depression?Rendered in Boyle’s accomplished, assured voice, with great period detail and utterly memorable characters, this is a moving and dramatic work from one of America’s most talented and inventive storytellers.

I found this read to be a story that covers the trial and tribulations of a few characters, families,  you are taken through their life of loss and love successfully by this author.
One female protagonist whom breaks free from one life and sets up across the country to a new dwelling an island with hopes of a long lasting happiness with a family finds that she’s no more at home in her finally days there as when she first set foot in the new environment. Hard times are come to fruition, the depression era and the emergence of a war with Japan. A beacon of light in the dark days arrived in the form of a new delivery of offspring holding a possible chance of a happier and more solid future for the family but this is watered down by the tide of problems and bad luck one woman has set before her.
The vast landscape and life of these women contained mothers and daughters makes great reading through the eyes of memorable characters.


Reviewed by Lou Pendergrast on 28 September 2012