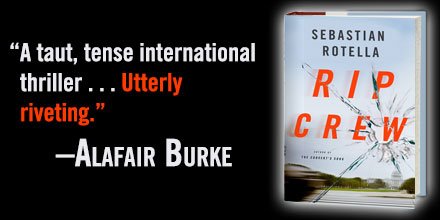 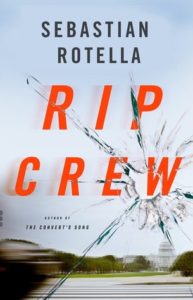 Streetwise U.S. agent Valentine Pescatore investigates a brutal killing that leads him across borders and reveals a vast conspiracy of wealth and power terrifyingly close to home.

Valentine Pescatore, the globetrotting former Border Patrol agent, finds himself back on American soil investigating the merciless killing of a group of women in a motel room. At first, the crime seems to be a straightforward case of gangsters battling for territory. Soon, however, the motive is revealed to be much deeper and more sinister: a single witness who knows too much is being hunted, at any cost.

“This latest installment in a series including Triple Crossing and The Convert’s Song is about as tightly woven and rock-solid as international thrillers get. Rotella is as good at setting up action scenes as he is at springing them (which is saying something: the shootouts are terrific). The crisp dialogue feeds the sculpted plot and vice versa. There is nary a wasted moment in the book or one in which Rotella isn’t in complete command. . . . Rotella’s latest is a tense, gritty thriller-perfectly seedy when it needs to be and near-perfect in its overall execution.”?Kirkus Reviews

“What a setup! It’s heartrending, violent, and intriguing…readers will hang on for the revelation and the mighty clash at the end.”?Don Crinklaw, Booklist

“Rotella writes convincingly about the realities and mechanics of investigative journalism, and his detailed action scenes add just enough mayhem to keep thriller readers on the edge of their seats.”?Publishers Weekly

We are dealing with fall guys and top guys, crews executing peoples and upper echelons suited criminals with powerful hands spreading far and wide, mucho dineras for bodies moved like cargo.
I liked this off the books contract investigator Valentine Pescatore and the whole investigation unfolded with gripping and nicely written narrative, insightfully  entertaining , an addition to that great first season show The Bridge.

Scintillating, unrelenting, cinematic quality, and thrill that rises up in the right times in the story that has you thoroughly gripped in this world he has crafted upon the page.

James Ellroy and Don Winslow come to mind when striking up similarities with the prose style and content.

“Corporate names on the boxcars—Cemex, Pemex, Ferromex—competed with gang graffiti: Mara Salvatrucha, 18th Street. In addition to fearing rape, robbery, extortion, and abduction, the illicit riders had to worry about falling off, getting run over, losing limbs. For those who survived the trek across Mexico, another task awaited: sneaking into the United States. A rough crossing that had gotten rougher since Pescatore had left the U.S. Border Patrol.”

“It was Pescatore’s first time at the line between Mexico and Guatemala. The mission had stirred old instincts and dormant emotions from his years in the Patrol. But he was in the private sector now. He had come to Palenque in the state of Chiapas as a contract investigator for the Department of Homeland Security. It was a sensitive, off-the-books assignment. Not officially an undercover operation. Right now,however, he was doing his best—strange as it felt—to impersonate an illegal immigrant.”

” Chiclet saw him as human freight, merchandise, a commodity to be bought and sold, shipped from here to there after extracting maximum profit.”

“The restaurant was like a hidden outpost in the suburban moonscape. The narrow deep interior was painted in warm gold tones. The sound system played the gravelly baritone of Alberto Marino singing a tango. On the walls were amateur paintings of Carlos Gardel, the waterfront in La Boca, the Obelisk on Nueve de Julio Avenue. A grocery area in back offered dulce de leche, mate tea, pastries, wine. The clientele were mostly families, Argentine and Central American, immigrants and expats. Many had their eyes lifted to a Spanish-league soccer game on the overhead screens.”

“Grim-faced, Isabel described the events in Tecate. The crime scene was a motel used by smugglers to stash loads of high-priced clients known in law enforcement parlance as “special interest aliens” (SIAs). The “special interest” referred to the fact that they came from Somalia, Syria, Pakistan, or other havens of terrorism. As opposed to OTMs, or “Other Than Mexicans”: Latin Americans from places where mayhem, massacre, and decapitation were driven by business imperatives, not religious ones. At five thirty a.m., sustained gunfire had been heard from the second floor of the motel. The police discovered the bodies of ten women shot execution-style. They were Somali, Ethiopian, and Eritrean. The ages ranged from early twenties to mid-fifties. Some of the women had not yet been identified. Three Mexicans guarding them had also been killed. The men had records for crimes typical of rip crews: robbery, kidnapping, assault.”

“Méndez had imagined his death many times, many places, many ways. Méndez was morbid by nature, nationality, and profession. He had survived ambushes and gunfights. He had studied the tactics and semiotics of assassination. His list of enemies was long and ominous. In nightmares and daydreams, the ever-changing film of his anticipated demise ran on a constant loop. He had been immolated like the Italian judge Falcone in Palermo, explosives erupting through asphalt to hurl cars and bodies heavenward. He had been shot point-blank like the Mexican presidential candidate Colosio in Tijuana, the gunman surging out of a crowd, grabbing his arm, and putting a gun to his head, an instant of human contact heralding obliteration. He had been shredded in a drive-by fusillade—car to car, pickup to car, motorcycle to car—like late Latin American colleagues in journalism and law enforcement. He had been set afire, flayed alive, dismembered, disemboweled, and decapitated like the narco-grunts in the violence-porn YouTube videos that the cartels used for psyops. The one scenario Méndez had not imagined was that the end would come at a children’s soccer game in La Jolla, California, U.S.A. And that the hit men would wear suits and ties.”

“The moon glowed blue over Copacabana. On the sound system of the rooftop bar, the rich somber voice of Virginia Rodrigues serenaded the moon with “Lua, lua, lua, lua.” Pescatore surveyed the bay, thirty stories below. Traffic flowed on the beachfront avenue. Lights glittered like diamonds in the hills, on the water, and along the urban reef formed by high-rise buildings. Barefoot soccer players shadow-danced on the sand. The games had been going on in front of the hotel all day. He wanted to godown and play, sprint in the surf, lose himself in the simple pleasure of sport.”

Reviewed by Lou Pendergrast on 16 March 2018