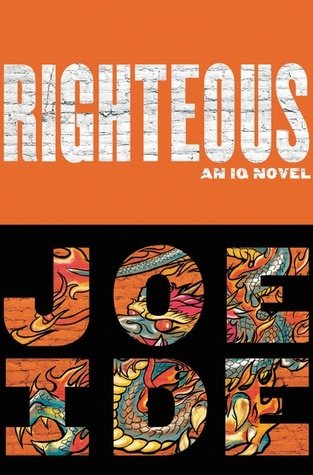 “Joe Ide is the best new discovery I’ve come across in a long time. And Isaiah Quintabe is the kind of sleuth not seen on the mystery landscape before. Righteous is a riveting follow up to IQ.”-Michael Connelly, author of The Late Show

“Ide is the real thing. This column was late, because I couldn’t stop reading my advance copy.”-Allison K. Hill, Long Beach Press-Telegram

“Ide’s debut, IQ, was one of last year’s best crime novels, and he follows it with another scorcher. . . . Like the great Thomas Perry, Ide manages to combine light and dark in wholly unpredictable ways, blending comic capering with real-life bloodletting in a manner that diminishes neither and taps a vein of deep emotion lurking amid the laugh lines and spurts of violence. Anyone who loves Perry or Timothy Hallinan needs to hop on Ide’s bandwagon while there’s still room to sit.”- Booklist

“Brilliantly executed . . . Deftly weaving the search for Marcus’s killer with various escapades in Vegas, Ide employs a clever mixing of time lines that will keep readers guessing until the explosive, bloody denouement. A winning combination of skillful writing and flawless pacing, this second series outing is packed with adrenaline-inducing scenes along with a colorful cast of violent and treacherous villains.”- Library Journal

“The game’s afoot once again for 20-something genius sleuth Isaiah Quintabe. . . . [Ide] keeps your head in the game throughout with his witty style and edgy storytelling, both of which show greater assurance than in his first novel–and even bigger potential for the future. A thrilling follow-up to one of the more auspicious detective-series debuts in recent memory.”- Kirkus Reviews

Tale of two crime syndicates and the search for one truth behind a crime of kin.
A second instalment in the days of a likeable p.i, a real character that just flows with style and originality.
I loved the debut IQ and i had written about that in my review, “There is a real potent voice created by the author Joe Ide, he has crafted a tale about the alternative American dream the other side of the fences tale, a tale of poetic justice in ways, in pursuit of happinesses and what people in the concrete jungle will do for it.”
Here we have some of the same.
The same sharp writing with potent prose, the same bang on dialogue and clear scenes, that has you being there in the thick of of it all, and the same social commentary of which is a good thing.
The author has a great way with writing with humour and similes , “Manzo backhanded her so hard her head did a Linda Blair, and she collapsed like somebody had yanked out her skeleton.”
Here is a peak at the main protagonist the p.i, Isaiah, describing himself, in a scene, “He looked his age, twenty-six; six feet tall and slim, maybe an athlete, maybe not. You’d choose him third for pickup basketball. His face surprised him, so watchful and serious. A girl once told him he looked like he was waiting for bad weather. He thought his nose was too broad, and his lips were too thick. It embarrassed him to think like that. He looked okay but just.”
He is still a p.i that relaxes, “he sat in his easy chair, drinking an espresso and listening to Segovia.”
The narrative shifts with chapters between past and present.
Dialogue with its profanities at times, real dialogue of the denizens of the tale, story pace has no bore and many things going on, mucho goings on than the debut.

That night, he sat on the stoop sharing an energy bar with the dog. As a puppy, the purebred pit bull belonged to a hit man. When Isaiah put the guy in prison, he kept the dog and named it Ruffin after Marcus’s favorite singer, David Ruffin. At ten weeks, Ruffin was cute and funny and weighed twelve pounds. Nine months later, he was a formidable fifty-seven-pound, slate-gray adolescent with amber eyes that made him look fierce and nobody thought he was cute or funny,  and he could pull Isaiah down the street like a child’s wagon.

Leo couldn’t have been anything else but a loan shark; weasel-faced, rose-tinted aviators, and a malicious smirk, his hair moussed, glistening, and swept back over his ears. His fashion sense tended toward paisley disco shirts with jumbo collars; nobody telling him that seventies retro was not now and never had been in. Leo was a gold-medal asshole, giving you shit even when you paid him off, and he didn’t seem to care that everybody, including the people he called friends, would rather hang out at the morgue than have a drink with him.

“He works for a triad. 14K. Thousands of members. They’re vicious dudes. They’re into sex trafficking, dope, kidnapping, all kinds of f****d-up things.”

Ken stood up and felt his body swell. He felt like a wolf, defending the last shreds of flesh on a rotting carcass. “I paid for the best private schools,” he said. “I paid for tennis lessons and art lessons and piano lessons. You were playing Beethoven when you were eleven years old. We went to concerts and museums. I took you to London and Paris and all over the world. You’ve seen the Forbidden Palace and the Ganges and the goddamn pyramids and do you want to know why?”

The Red Poles were Tommy’s enforcers, recruited from Hong Kong’s rooftop slums. Thousands of people who couldn’t afford two grand a month for an apartment the size of a one-car garage lived on the roofs of old buildings; six or seven families crammed into a shack made from corrugated tin and scrap lumber; one toilet, no ventilation, sleeping on newspapers, infested with rats and white ants, sweltering in the tropical heat, drenched during the rainy season. Survive there and you’re a hard remorseless motherfucker. Chosen from there and you’re loyal as a robot.

But the dog lived like Isaiah; isolated, with few outings except their long walks and with little contact with other people or dogs. Pedestrians crossed the street to avoid them, cops looking at them as they drove by. Isaiah didn’t like that part, people thinking he was one more gangsta with his big bad dog. Training went by the wayside. As long as the dog was on the leash, he was fine, Isaiah telling himself he was too busy to go through all the exercises.

Isaiah put on Coltrane’s Ascension, forty-five minutes of improvised pandemonium and musicianship. Music helped Isaiah bear down and think, his neurons forced to overcome the sounds, the notes filling in the blank spaces between thoughts, keeping more pleasant diversions out of his head; having an espresso, reading, walking the dog, tinkering with the car. He lay down on the sofa with an ice pack on his ear, his middle aching where Ari punched him. Ruffin trotted over. He mewled and rested his head on Isaiah’s knee. “It’s okay, boy,” Isaiah said. “Everything’s okay.” It was common knowledge that dogs could sense your emotional state, but nobody ever said how a species that bears no resemblance to humans, doesn’t speak English, and was bred to herd sheep, retrieve dead birds, or ward off predators knows that you’re upset and comes over to comfort you. Most humans weren’t nearly that sensitive.

Over the years, 14K and the triads found easier ways make money, gradually shifting their interests to gambling, drugs, credit card fraud and other financial crimes, leaving the business largely to the snakeheads. Most were small operations, some family-run, others groups of common criminals. But Tommy realized the triads’ lack of interest had left a fortune on the table. Despite its problems, he got back into the business, gradually taking over a substantial part of the market in both California and Nevada. Some of the competition had been absorbed, the rest were visited by the Red Poles and forced to relocate. Tommy made lots of money.

Reviewed by Lou Pendergrast on 22 October 2017