Book Review: Pieces of Her by Karin Slaughter - More2Read

Pieces of Her by Karin Slaughter 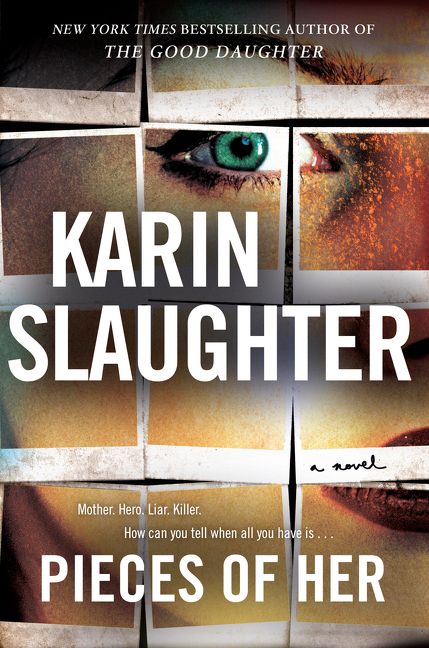 The #1 internationally bestselling author returns with a new novel in the vein of the New York Times bestsellers Pretty Girls and The Good Daughter—a story even more electrifying, provocative, and suspenseful than anything she’s written before

What if the person you thought you knew best turns out to be someone you never knew at all . . . ?

But all that changes when a trip to the mall explodes into violence and Andrea suddenly sees a completely different side to Laura. Because it turns out that before Laura was Laura, she was someone completely different. For nearly thirty years she’s been hiding from her previous identity, lying low in the hope that no one would ever find her. But now she’s been exposed, and nothing will ever be the same again.

The police want answers and Laura’s innocence is on the line, but she won’t speak to anyone, including her own daughter. Andrea is on a desperate journey following the breadcrumb trail of her mother’s past. And if she can’t uncover the secrets hidden there, there may be no future for either one of them. . . .

Praise for Pieces of Her :

“Simply one of the best thriller writers working today. I’d follow her anywhere.” – Gillian Flynn
“Enter the world of Karin Slaughter. Just be forewarned, there’s no going back.” – Lisa Gardner

“Slaughter has outdone herself with Pieces of Her—a novel that sets the standard for psychological thriller writing. Rarely in fiction have the past and the present collided with such force and in such a distinctive and compelling voice.”  —  Jeffery Deaver

“The ever-popular crime novelist is back with another pulse-pounding standalone, this one considering the twisted relationship between a mother and a daughter after the latter realizes she may not know the woman who gave birth to her at all.”
—  Entertainment Weekly 20 NEW BOOKS TO READ IN AUGUST

“With an intrigue and suspense-filled plot, Slaughter’s well-crafted, tense, and exhilarating story will keep readers on the edge of their seats.”
—  Library Journal

“Readers will find themselves totally immersed in the suspenseful, alternating story lines and won’t want either of them to end.”  —  Booklist

How much you love your daughter?
Great lengths one mother goes to protect her daughter from the violence and carnage.
Mother and daughter in a tale that is thrilling and suspenseful, from a master in this vein of storytelling.
Momentum changed, her world gone sideways, balanced changed for this daughter, with each successive piece of the puzzle questions arise, the clock is ticking, time is passing, past and present running its course, propelling the reader forward to truths and the whole piece of her, she will be upon a tapestry of truths, of her.
Something started in Oslo and will be ending in the USA.
Storage facility, hidden key, flip phone, money, and a untraceable car hidden from the world.
Her mother was a fifty-five-year-old speech therapist. She played bridge.
Her daughter, Andy, had seen no signs of violence in her life.

This lady can write, she can write an unflinching, tight, breakneck pace thriller, with all the crime and tilted minds.
If you get a chance read also her previous work, I called a tragedy in North Georgia, the Good Daughter to be adapted to film.
A thriller to hit best of 2018 lists.
A crisp unflinching visceral narrative, unraveling pieces of a mother she thought she had known.

“For years, even while she’d loved him, part of her had hated him in that childish way that you hate something you can’t control. He was headstrong, and stupid, and handsome, which gave him cover for a hell of a lot of the mistakes he continually made—the same mistakes, over and over again, because why try new ones when the old ones worked so well in his favor?
He was charming, too. That was the problem. He would charm her. He would make her furious. Then he would charm her back again so that she did not know if he was the snake or she was the snake and he was the handler.
So he sailed along on his charm, and his fury, and he hurt people, and he found new things that interested him more, and the old things were left broken in his wake.
Then, quite suddenly, his charm had stopped working. A trolley car off the tracks. A train without a conductor. The mistakes could not be forgiven, and eventually, the second same mistake would not be overlooked, and the third same mistake had dire consequences that had ended with a life being taken, a death sentence being passed, then—almost—resulted in the loss of another life, her life.
How could she still love someone who had tried to destroy her?”

“Andy had gone to New York City thinking she would find a way to shine and ended up emitting the equivalent amount of light you’d find in an old emergency flashlight left in a kitchen drawer. She hadn’t wanted to be an actor or a model or any of the usual clichés. Stardom was never her dream. She had yearned to be star-adjacent: the personal assistant, the coffee fetcher, the prop wrangler, the scenery painter, the social media manager, the support staff that made the star’s life possible. She wanted to bask in the glow. To be in the middle of things. To know people. To have connections.”

“Everyone loved her mother, no matter what mode she was in: therapist, friend, business owner, cancer patient, mother. She had a sort of relentless kindness that was kept from being too sugary by her quick, sometimes acerbic wit.”

“But—” Andy didn’t know what the but was.
But people are dead.
But you could’ve died.
But you killed somebody when you didn’t have to.
Didn’t you?”

“This wasn’t one drug dealer shooting another drug dealer in the streets, or an abusive spouse finally crossing the last line. A white kid had shot two white women, then was killed by another white woman, in one of the most affluent malls in the state.”

Reviewed by Lou Pendergrast on 18 August 2018