Pan’s Labyrinth: The Labyrinth of the Faun by Guillermo del Toro, Cornelia Funke 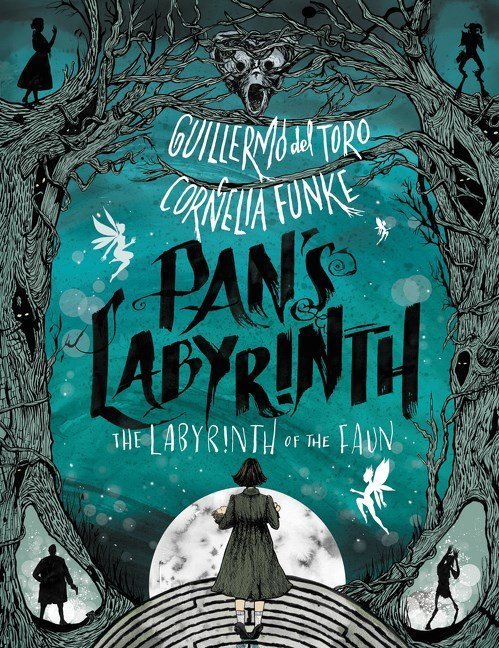 This book is not for the faint of heart or weak in spirit. It’s not for skeptics who don’t believe in fairy tales and the powerful forces of good. It’s only for brave and intrepid souls like you, who will stare down evil in all its forms.

Perfect for fans of the movie and readers who are new to del Toro’s visionary work, this atmospheric and absorbing novel is a portal to another universe where there is no wall between the real and the imagined. A daring, unforgettable collaboration between two brilliant storytellers.

Praise For Pan’s Labyrinth:
The Labyrinth of the Faun:

“Charged with the monumental task of adapting an intricate film to the page, del Toro (The Shape of Water, 2018, etc.) and Funke (The Griffin’s Feather, 2018, etc.) have avoided merely describing the film and instead have elegantly recrafted the narrative…. Dark and mesmerizing.”
-Kirkus Reviews (starred review)

“A richly told story that blends fairy tale magic and historical tragedy to create an eerie, chilling look at the many faces of evil.”
-Bulletin of the Center for Children’s Books (starred review)

“Funke maintains the tale’s dark beauty, filling it with imaginative details, complex characters, love, and history, as well as humanity’s evils. With pages hauntingly framed in trees and gorgeous full-page illustrations, this book will creep into the minds and hearts of readers and linger there.”
-ALA Booklist

“Fans of the film will enjoy this in-depth exploration and reimagining of the source material, while newcomers will have no trouble getting into the story, though its dark themes and occasional gruesome scenes aren’t for the faint-hearted.”
-Publishers Weekly

“Perfectly unsettling and deeply felt, this reminded me of the best kind of fairytales wherein each chapter is a jewel that, when held up to the light, reframes how we see the world around us.”
-Roshani Chokshi, New York Times bestselling author of The Star-Touched Queen & Aru Shah and the End of Time

“A fearless and moving adaption of the film, and a gorgeously-written, emotional, frightening parable about the courage of young women amid the brutality of war.”
-Michael Grant, New York Times bestselling author of Gone

“Once upon a time, when the woods were young, they were home to creatures who were full of magic and wonder. . . .”

Growing evil and growing courage, death and birth at the centre of this tale, young girl post loss of father, new father gained, with a new brother to be born a birth of importance and key to a cycle of things in motion up against a force of inherited evil.
There locating to a certain mountain with terrible histories, one of many dark things working when…”Death ruled everywhere.”

A world calling and summoning, new discoveries, new territories, mysterious and enchanting, sinister and dark fantasy, with the danger that lurks beneath her feet with the new tasks put before her, the secrets unraveling along with the journey of fulfilling the Faun’s tasks with life and death in the balance of things keeping you reading on with Ofelia’s fate close to heart.
The tale upon these pages delivered more details to the story played out in the film expanding its universe with more storytelling brilliance.

“There once was a forest in the north of Spain, so old that it could tell stories long past and forgotten by men. The trees anchored so deeply in the moss-covered soil they laced the bones of the dead with their roots while their branches reached for the stars.”

“As white as snow, as red as blood, as black as coal,” Ofelia’s father used to say when he looked at her mother, his voice soft with tenderness. “You look so much like her, Ofelia.” Lost.”

“Evil seldom takes shape immediately. It is often little more than a whisper at first. A glance. A betrayal. But then it grows and takes root, still invisible, unnoticed. Only fairy tales give evil a proper shape. The big bad wolves, the evil kings, the demons, and devils . . .
Ofelia knew that the man she would soon have to call “Father” was evil. He had the smile of the cyclops Ojancanu and the cruelty of the monsters Cuegle and Nuberu nesting in his dark eyes, creatures she had met in her fairy-tale books. But her mother didn’t see his true shape. People often grow blind when they get older and maybe Carmen Cardoso didn’t notice the wolfish smile because Capitán Vidal was handsome and always impeccably dressed in his gala uniform, boots, and gloves. Because she wished so badly for protection, maybe her mother mistook his bloodlust for power and his brutality for strength.”

“Death is a lover to be feared and there was only one way to overcome that fear—by being her executioner.”

“Once upon a time, but not long ago, there lived a Child Eater in an ancient forest. The villagers who picked up the deadwood under the trees to get through the winter called him the Pale Man. His victims were so numerous their names could have covered the walls of all the halls he’d built underground, below the forest. He made their bones into furniture as delicate as their limbs, and their screams were the music that accompanied his feasting at the very table on which he’d killed so many of them.”