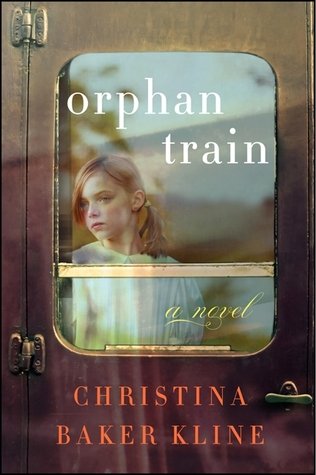 “A compelling story about loss, adaptability, and courage . . . With compassion and delicacy Kline presents a little-known chapter of American history and draws comparisons with the modern-day foster care system.” (Library Journal)

“In ORPHAN TRAIN, Christina Baker Kline seamlessly knits together the past and present of two women, one young and one old. Kline reminds us that we never really lose anyone or anything or–perhaps most importantly–ourselves.” (Ann Hood, author of The Knitting Circle)

“I loved this book: its absorbing back-and-forth story, its vivid history, its eminently loveable characters. ORPHAN TRAIN wrecked my heart and made me glad to be literate.” (Monica Wood, author of When We Were the Kennedys)

“One of the most powerful novels I’ve ever read…I am compelling all of you, even begging you, to make this novel your next read. You’ll be talking about it for years to come!” (Naples Daily News (FL))

“Absorbing…a heartfelt page-turner about two women finding a sense of home…Kline lets us live the characters’ experiences vividly through their skin…The growth from instinct to conscious understanding to partnership between the two is the foundation for a moving tale.” (Publishers Weekly)

“I was so moved by this book. I loved Molly and Vivian, two brave, difficult, true-hearted women who disrupt one another’s lives in beautiful ways, and loved journeying with them, through heartbreak and stretches of history I’d never known existed, out of loneliness toward family and home.” (Marisa de los Santos, New York Times-bestselling author of Belong to Me and Falling Together)

“A lovely novel about the search for family that also happens to illuminate a fascinating and forgotten chapter of American history. Beautiful.” (Ann Packer, New York Times-bestselling author of The Dive from Clausen’s Pier and Swim Back to Me)

“Christina Baker Kline writes exquisitely about two unlikely friends . . . each struggling to transcend a past of isolation and hardship. ORPHAN TRAIN will hold you in its grip as their fascinating tales unfold.” (Cathy Marie Buchanan, New York Times-bestselling author of The Painted Girls)

“Christina Baker Kline’s latest wonder, ORPHAN TRAIN, makes for compulsive reading…Meticulously researched and yet full of the breath of life, Kline’s novel takes us on an historical journey where survival depends upon one’s own steely backbone, and the miracle of a large and generous heart.” (Helen Schulman, New York Times-bestselling author of This Beautiful Life)

“A poignant and memorable story of two steadfast, courageous women…A revelation of the universal yearing for belonging, for family, for acceptance and, ultimately, the journeys we must all make to find them.” (Kathleen Kent, New York Times-bestselling author of The Heretic’s Daughter and The Traitor’s Wife)

This is a story involving a real period in history when children, who were orphaned or just given away, had been put on train from one state to another state of the U.S.A. into the care of a new family.
The children in this story were intrusted to families in many cases to help with household chores or cheap labor and the family was supposedly to give in return food, shelter and schooling. The sad fates on the children in this tale make hard reading and the negligence of those that handed them over shocking and careless. These new carers had no suitable checks their personalities their behaviors and minds were damaging to the characters in this story. There is a some joy for the main girl of this story eventually after being in the hands of harm they found some safety.

This story is told through two women, a teen Molly, and an elderly lady Vivian.
They both meet due to Molly, who lives with foster parents, having to do some community service time, she is pointed in the direction of Vivian who has a large home and an attic that needs cleaning out and sorting. What she finds is that she embarks in a conversation on the past of this wise woman, Vivian, and her life that partook in her being on an orphan train. This woman Vivian tells her journey, her harrowing experiences. She tells of the people she encountered in her youth, her journey makes heartbreaking reading.
She was a young red head from Ireland whose family when arriving in the USA found life very tough, and when the 1930’s depression era hit they found it even harder.
Together in their conversation and speaking of their past their piece together and settle some pains and reunite lost hearts.
Memorable reading, memorable characters, a story that can not be passed of as just fiction but real and occurred in many children’s lives in bygone days and the present.
A great important story that was handled wonderfully by this very capable writer.

“I believe in ghosts. They’re the ones who haunt us, the ones who have left us behind. Many times in my life I have felt them around me, observing, witnessing, when no one in the living world knew or cared what happened.
I am ninety-one years old, and almost everyone who was once in my life is now a ghost.
Sometimes these spirits have been more real to me than people, more real than God. They fill silence with their weight, dense and warm, like bread dough rising under cloth. My gram, with her kind eyes and talcum-dusted skin. My da, sober, laughing. My mam singing a tune. The bitterness and alcohol and depression are stripped away from these phantom incarnations, and they console and protect me in death as they never did in life.”

“He was killed in a one-car rollover several weeks later, speeding down 1-95 on an icy night, after which her mother, all of twenty-three, started a downward spiral she never recovered from. By Molly’s next birthday she was living with a new family, and her mother was in jail. The charms are all she has left of what used to be her life.”

“Molly learned long ago that a lot of the heartbreak and betrayal that other people fear
their entire lives, she has already faced. Father dead. Mother off the deep end. Shuttled around and rejected time and time again. And still she breathes and sleeps and grows taller. She wakes up every morning and puts on clothes. So when she says it’s okay, what she means is that she knows she can survive just about anything. And now, for the first time since she can remember, she has someone looking out for her.”

“We hear the train before we can see it. A low hum, a rumble underfoot, a deep-throated whistle, faint at first and then louder as the train gets close. We crane our necks to look down the track, and suddenly here it is: a black engine looming over us, shadowing the platform, letting out a hiss of steam like a massive panting animal.
I am with a group of twenty children, all ages. We are scrubbed and in our donated clothes, the girls in dresses with white pinafores and thick stockings, the boys in knickers that button below the knee, white dress shirts, neckties, thick wool suit coats. It is an unseasonably warm October day, Indian summer, Mrs. Scatcherd calls it, and we are sweltering on the platform. My hair is damp against my neck, the pinafore stiff and uncomfortable. In one hand I clutch a small brown suitcase that, excepting the locket, contains everything I have in the world, all newly acquired: a bible, two sets of clothes, a hat, a black coat several sizes too small, a pair of shoes. Inside the coat is my name, embroidered by a volunteer at the Children’s Aid Society.”

“Chicago is a proud and noble city, on the edge of a great lake. The lake makes it windy, hence its appellation: ‘The Windy City.’ You will bring your suitcases, of course, and your wool blanket to wrap yourself in, as we will be on the platform for at least an hour.
“The good citizens of Chicago no doubt view you as ruffians, thieves, and beggars, hopeless sinners who have not a chance in the world of being redeemed. They are justifiably suspicious of your character. Your task is to prove them wrong—to behave with impeccable manners, and comport yourselves like the model citizens the Children’s Aid Society believes you can become.”

“Vivian has never really talked about her experience on the train with anyone. It was shameful, she says. Too much to explain, too hard to believe. All those children sent on trains to the Midwest—collected off the streets of New York like refuse, garbage on a barge, to be sent as far away as possible, out of sight.
And anyway, how do you talk about losing everything?”

“When Vivian describes how it felt to be at the mercy of strangers, Molly nods. She knows full well what its like to tamp down your natural inclinations, to force a smile when you feel numb. After a while you don’t know what your own needs are anymore. You’re grateful for the slightest hint of kindness, and then, as you get older, suspicious. Why would anyone do anything for you without expecting something in return? And anyway—most of the time they don’t. More often than not, you see the worst of people. You learn that most adults lie. That most people only look out for themselves. That you are only as interesting as you are useful to someone.
And so your personality is shaped. You know too much, and this knowledge makes you wary. You grow fearful and mistrustful. The expression of emotion does not come naturally, so you learn to fake it. To pretend. To display an empathy you don’t actually feel. And so it is that you learn how to pass, if you’re lucky, to look like everyone else, even though you’re broken inside.”

Reviewed by Lou Pendergrast on 19 April 2013