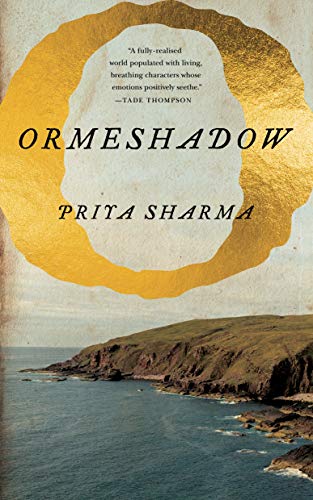 Acclaimed author Priya Sharma transports readers back in time with Ormeshadow, a coming-of-age story as dark and rich as good soil.

Burning with resentment and intrigue, this fantastical family drama invites readers to dig up the secrets of the Belman family, and wonder whether myths and legends are real enough to answer for a history of sin.

Uprooted from Bath by his father’s failures, Gideon Belman finds himself stranded on Ormeshadow farm, an ancient place of chalk and ash and shadow. The land crests the Orme, a buried, sleeping dragon that dreams resentment, jealousy, estrangement, death. Or so the folklore says. Growing up in a house that hates him, Gideon finds his only comforts in the land. Gideon will live or die by the Orme, as all his family has.

“I love the structure of Ormeshadow- each chapter a kind of story unto itself and yet all flowing smoothly together. If you like graceful writing in your fantasy fiction, depth of character, and a connection to real life issues, this is a perfect read.”
-Jeffrey Ford

“This is exactly the kind of book that I enjoy. The skillful creation of atmosphere, the touching and painful interaction of characters, the sense of creeping dread, and the sheer beauty and skillfulness of Sharma’s prose prove what I thought when I read her short stories: that she is one of the most powerful writers of fantastical fiction working today. The complexity of Ormeshadow’s narrative is underscored by Sharma’s use of THE telling detail, but not much else. This is a fully-realised world populated with living, breathing characters whose emotions positively seethe.”
-Tade Thompson

With mention of gallows and dragons you feel the age in this tale, with the transportation to a village in ormeshadow England, Ormesleep farm, from townhouses of Bath,
in days of old, a family of three, with a young boy with aspirations, wonderment, enchantment and mystery, the searchings in a place where peace and solace may or may not be found.

Complexities of new terrain with new behaviors, futures and past boiling in a pot with trouble possibly rising, and one hope, a dragon to whisk the young Gideon away.
Gideon a likable character with a big heart, one empathy carefully crafted for by the capable writing of Priya Sharma and this realm of Orme with tragedy in the village Ormeshadow momentum shifting and terrible truths emerging.

Withholding the right amount of information keeping reader intrigued and then enchanted with mystery, the mythical, and the expectations of what will become of Gideon in this vibrant retelling of a coming of age tale.
This novella a best of books for 2019.
Thank you to Priya Sharma and Tor publishers for the interview and the opportunity to read this.
Brian Evenson was right in his recommendation in my interview with him he said, “Priya Sharma’s Ormeshadow is great.”

She is a Shirley Jackson finalist and Locus Award finalist for “All the Fabulous Beasts”, a collection of her some of her work, which is available from Undertow Publications.

Reviewed by Lou Pendergrast on 01 October 2019