Of Mice and Minestrone – Hap and Leonard: The Early Years by Joe R. Lansdale 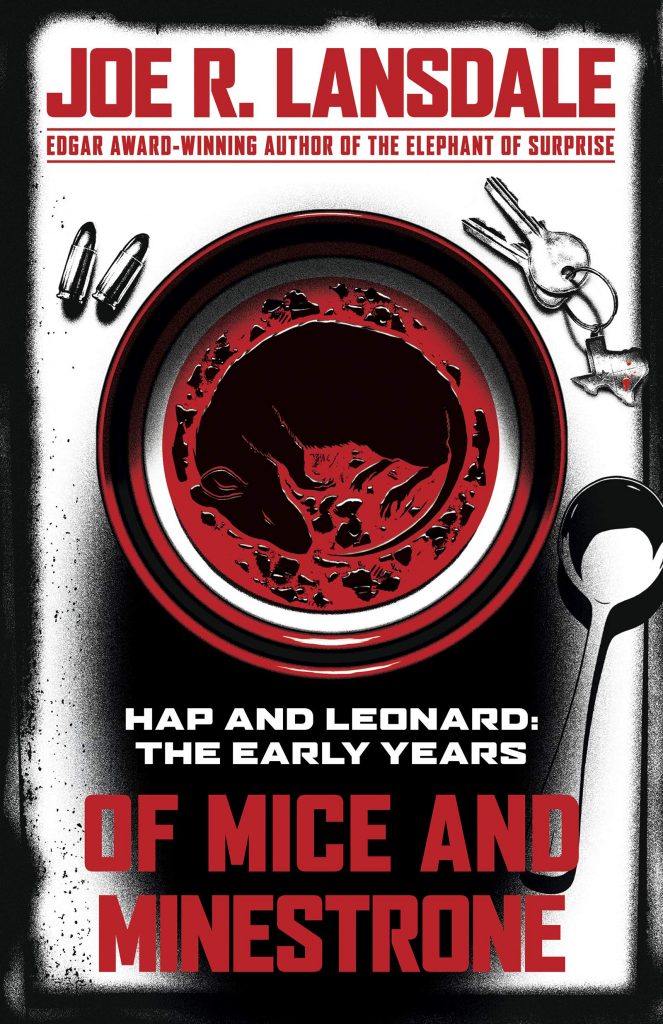 About Of Mice and Minestrone:

Pull up a seat and sit a spell. Master storyteller Joe R. Lansdale has cooked up a passel of tales for you about the unlikeliest duo East Texas has to offer.

Hap Collins looks like a good ol’ boy, but from his misspent youth on, his best compatriot is Leonard Pine-black, gay, and the ultimate outsider. Inseparable friends, Hap and Leonard attend family gatherings, climb into the boxing ring, get in bar fights, and just go fishing-all while confronting racism, righting wrongs, and eating copious, delicious food.

Chock full of Lansdale’s unique blend of humor, ferocity, and insight, Of Mice and Minestrone delivers five never-before-seen (plus one perhaps familiar) Hap and Leonard stories, a selection of the boys’ favorite recipes, and an introduction from New York Times bestselling author Kathleen Kent.

So come discover the legends of Hap and Leonard, created by Joe R. Lansdale his own self, and featured in the by Hap and Leonard TV series starring Michael K. Williams (The Wire), James Purefoy (The Following), and Christina Hendricks (Mad Men).

Praise for Of Mice and Minestrone:

“Five stories, four of them new, filling in more of the early years of that imperishable East Texas duo, Hap Collins and Leonard Pine. Kathleen Kent’s brief introduction suggests that the running theme here is ‘Kindness and Cruelty.’ An even more precise motto might be ‘Violence Is Inevitable,’ since Lansdale consistently treats the often lethal outbursts of his characters in disarmingly matter-of-fact terms, as if the boys couldn’t help it. Three of the stories present Hap (white, straight, tough, sentimental) in the days before he met Leonard (black, gay, tougher, chip on shoulder), and two of them barely count as stories: ‘The Kitchen’ is a retrospective valentine to the simple pleasures of a family visit to Hap’s grandmother, and ‘The Sabine Was High’ allows the pair to swap anecdotes about Hap’s stint in prison and Leonard’s hitch in Vietnam after Hap meets the bus bringing Leonard home. In between, the title story shows Hap’s futile attempts to rescue a stranger named Minnie from the husband who batters her, tracks her down to her sister’s, and maybe kills her; ‘The Watering Shed,’ the sole reprint, tracks the progress from Hap and Leonard’s maiden voyage to a local bar to a suddenly ugly, race-tinged quarrel that leaves two men dead; and ‘Sparring Partner,’ the longest and best of the lot, follows the two friends to the perfect milieu, the boxing ring, where they hire out as punching bags for allegedly more dangerous opponents and where ritualized violence is subject to rules that have to be followed unless they don’t. The dialogue throughout is worth the price of admission, not as stylized as Elmore Leonard’s but laden with the same irresistible combination of relaxed badinage and playful threats that sometimes spiral into serious consequences while still remaining playful. The 17 down-home recipes contributed by Lansdale’s daughter, Kasey, many of them as chatty as the stories, are a bonus.”
-Kirkus

“Full of humor, gritty drama, and insightful observations, the five stories in this rewarding collection from Edgar winner Lansdale (The Elephant of Surprise) concentrate on the early years of his two mismatched East Texas private eyes: Hap Collins, a straight, white liberal; and Leonard Pine, a gay, black conservative. Lansdale packs a punch in the standout ‘Sparring Partner,’ in which the pair, as high schoolers, are hired by a ruthless boxing manager to train a weakling college kid and a giant named Man Slayer. Hap and Leonard fend off a murderous racist in the thrillingly grisly ‘The Watering Shed,’ and in the moving title tale, Hap strives to help a battered woman escape her abusive husband. A food theme runs from the smells of an adolescent Hap’s grandma’s kitchen to a teenage Leonard’s insistence on being served breakfast in a whites-only café. ‘Good Eats,’ a selection of recipes with a disclaimer from Hap, rounds out the volume. This book adds rich background to Lansdale’s tough, morally decent characters, who first appeared in 1990’s.”
-Publishers Weekly

“These stories evoke the likes of Elmore Leonard, and manage to feel so reflective that one can almost taste the food.”
-Green Man Review

“In these character studies of his two most charismatic protagonists, Joe Lansdale takes us to the dark side of Mayberry-authentic tales of small town life in the heart of the twentieth century that also provide an unflinching look at the violence that charged the last gasps of Jim Crow, with all the force of the Sabine River at flood stage.”
-Christopher Brown, Campbell and World Fantasy Award-nominated author of Tropic of Kansas and Rule of Capture

“There’s a place in East Texas where story shades into memory, where violence and tenderness are just part of the wonder of living, and that’s precisely where Joe Lansdale lives, and writes from, and we’re all the better for it. The eating’s pretty good there, too, as Hap’s recipes more than attest. You leave this book hungry, both for food and to start the whole series all over again, live through it one more time, maybe just live there a while.”
-Stephen Graham Jones, author of Mongrels and The Only Good Indians

“An absolute treasure trove for Hap and Leonard fans. Going back to the beginning only deepens our love and appreciation for these guys. This collection proves once again why Joe Lansdale is one of our very best.”
-Ace Atkins, New York Times Bestselling author of The Shameless

“Of Mice and Minestrone is classic Lansdale at his legendary best. For his legions of fans, the much-anticipated stories will fill some of the gaps in their collections. For new readers, they will soon come to appreciate why Lansdale is regarded as one of America’s finest living writers. Compelling. Hilarious. Poignant. Readers have waited a long time for this collection to finally appear. It was well worth that wait. Roll on the next sequels and prequels.”
-NY Journal of Books

“I enjoyed every tale in this collection. The best was the title story which was pretty dark and incredibly sad. I really need to read more of Hap and Leonard’s adventures if this book is an example of what they get up to.”
-Book Lover’s Boudoir

“Of Mice and Minestrone is the last bit of connective tissue missing from the Hap and Leonard Mythos, which is one of the most entertaining series in modern literature. This book, which deals with abuse, friendship, violence, growing up, race, food, and justice, is full of the wit that’s made Lansdale a star.”
-Gabino Iglesias, author of Coyote Songs

As always Joe Lansdale signature telling with characters, actions, and words, potent and vivid, ones to crack a smile on a dull day and stir a heart with nostalgic immersion in a scene.

With the first tale the reader are brought to days of youth and nostalgia of Hap and his favorite breakfast, his meal fries and pinto beans, grandmas house and an evening holding stories told by elders passed down to stir and warm the night.

The reminiscings, along with humor, bring a smile on gloomy pandemic day, a craft this author has great craftsmanship at conjuring with words, evoking empathy, emotions, humor, rage and that blood flowing feeling alive as characters act and think and words settle.

“Even dreaming, I smelled the aroma of fried chicken and pies and biscuits and cornbread. Smells of family gatherings and the warm kitchens where it was all cooked. The smells of contentment and security, all the grand things that a child adores before the illusion of magic and endless possibilities is broken by experience and time and life’s plans tumble like meteors from the sky.”

A passage of words with psychological insight, a melody of dreams, feelings in plain view what one may dream of and wish to renew and live days of youth and naivety.

Of Mice and Minestrone:

Hap is sixteen driving a bronze ’64 Impala working temporary in a police station, before time to head back to school, and wants something more in life in Marvel Creek.
He finds himself in middle of a little husband and wife business, there will be drama unfolding and there is racism involved, these events to possibly stir change of heart and character for Hap into adulthood in Marvel Creek.

Nice words in task of description:

“Pop’s hands were like leather mitts and his face looked to have been irrigated, his wrinkles were so deep. His hair was snow white and cut close, and his eyes were as sad as those paintings of Jesus on the cross, and they had scar tissue above them, thick as tree bark and similar in appearance. He was big and slightly bent, and when he walked, he lumbered and limped.”

And words of wisdom:

“A fella can see something like what you saw, and it can hang in the back of his mind like a goddamn bat, but finally that bat will fly off. Sometimes it’ll come back and nest, but it won’t be around as much as it’s around now.”

Thee Third story.
Involves rites of passage and mention of the bond of friendship and brotherhood between Hap and Leonard, as he mentions:

“Frankly, I don’t know how it happened, but since Leonard and I met, we had become friends, and had bonded because of certain incidents, and truth was, we were moving beyond mere friendship and were becoming like brothers. Him being black and me being white broke some unwritten rules, and me hanging with him and him being queer, that just made it all the worse as far as many Southern folk were concerned.”

Great smilies, another great skill of the author to crack a needed smile:

“We went in, Leonard bold as a cold, bare titty at a strip show, and me a little nervous, like a long-tailed cat in a room full of rocking chairs.”

There is trouble in watering shed and men tangle, words said, blood flows.

This takes place after graduating high school.
He had just met the girl of which will be play big part later in Hap and Leonard stories.
Hap and Leonard both fighters and partaking in some boxing and for a small fee as sparring partners to a few fighters. There will be ten rounds of boxing, black and white men fighting against in the corners with Leonard in the fight.
There is fighting strategy and techniques talk, as well as the usual words in that region in that time thrown around with human battles.

The Sabine was High:

This final story with Hap and Leonard on a fishing trip as Leonard gets back from a war. Fishing and two friends out at night sleeping under the stars and talk of life, more Hap and Leonard ruminations with one back from battle.