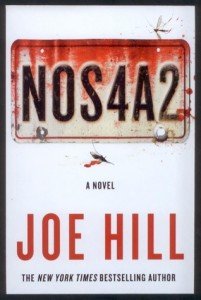 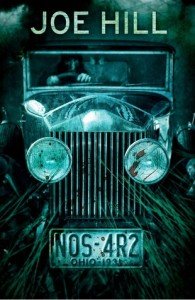 NOS4A2 is a spine-tingling novel of supernatural suspense from master of horror Joe Hill, the New York Times bestselling author of Heart-Shaped Box and Horns.

Victoria McQueen has a secret gift for finding things: a misplaced bracelet, a missing photograph, answers to unanswerable questions. On her Raleigh Tuff Burner bike, she makes her way to a rickety covered bridge that, within moments, takes her wherever she needs to go, whether it’s across Massachusetts or across the country.

Charles Talent Manx has a way with children. He likes to take them for rides in his 1938 Rolls-Royce Wraith with the NOS4A2 vanity plate. With his old car, he can slip right out of the everyday world, and onto the hidden roads that transport them to an astonishing – and terrifying – playground of amusements he calls “Christmasland.”

Then, one day, Vic goes looking for trouble—and finds Manx. That was a lifetime ago. Now Vic, the only kid to ever escape Manx’s unmitigated evil, is all grown up and desperate to forget. But Charlie Manx never stopped thinking about Victoria McQueen. He’s on the road again and he’s picked up a new passenger: Vic’s own son.

Planes, trains and automobiles..no..
Bicycles, Motorcycles and Cars..better…
Raleigh, Triumph and 1938 Rolls Royce..even better…
The Iconic mixed with dread with some good versus evil in the mix plus some creative storytelling crafted by the capable writing skill of Joe Hill.
These vehicles of transport are his modus operandi in telling this strange tale involving Christmas with a twist, there is definitely no ‘Here’s Father Christmas!’ but there is certainly ‘Here’s Charlie Manx!’
He writes with interesting characters, it reads visceral and gives you vivid imagery in scenes.
All his novels have great artwork and book titles. The publicity behind this has been top notch great book trailer, the publishers have handled this release successfully and Joe Hill is savvy with social media, he listens and connects with his readers and has a great following.