The Ninth Hour by Alice McDermott 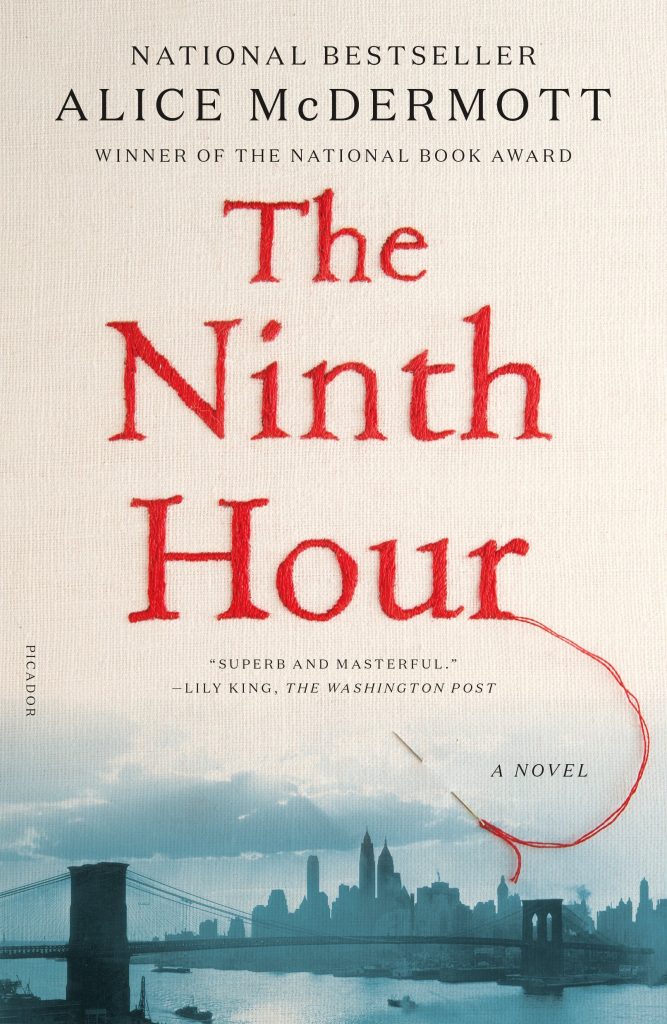 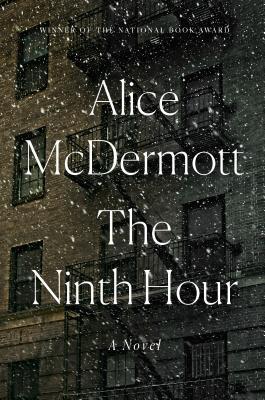 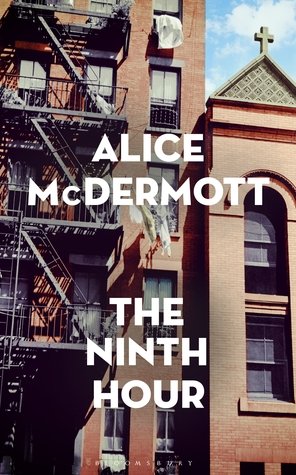 From National Book Award-winner and Pulitzer Prize Finalist Alice McDermott, The Ninth Hour is the critically-acclaimed “haunting and vivid portrait of an Irish Catholic clan in early twentieth century America” (The Associated Press).

On a dim winter afternoon, a young Irish immigrant opens a gas tap in his Brooklyn tenement. He is determined to prove?to the subway bosses who have recently fired him, to his pregnant wife?that “the hours of his life . . . belonged to himself alone.” In the aftermath of the fire that follows, Sister St. Saviour, an aging nun, a Little Nursing Sister of the Sick Poor, appears, unbidden, to direct the way forward for his widow and his unborn child.

In Catholic Brooklyn in the early part of the twentieth century, decorum, superstition, and shame collude to erase the man’s brief existence, and yet his suicide, though never spoken of, reverberates through many lives?testing the limits and the demands of love and sacrifice, of forgiveness and forgetfulness, even through multiple generations. Rendered with remarkable delicacy, heart, and intelligence, Alice McDermott’s The Ninth Hour is a crowning achievement of one of the finest American writers at work today.

The Ninth Hour by Alice McDermott :

Superb and masterful . Powerful and sublime … Her sentences burn on the page – Washington Post

Prose that can feel almost physically radiant . Any emotional turn brings a chance in light, often imbued with a sense of grace … McDermott is an extraordinary writer –  Sunday Telegraph

Her wisdom, gently hewn out of the stuff of every day, shines through . Here is the simple but priceless gift of seeing the beauty of things and knowing that even through pain and loss that beauty will abide and indeed glow brighter the longer we look – The Times

It is easy to fall in love with Alice McDermott’s prose. Her endearing details and graceful sentences value the ordinary confusions of day-to-day lives’ – Times Literary Supplement

Her sentences know themselves so beautifully: what each has to deliver and how best to do it, within a modicum of space, with minimal fuss –  New York Times

“McDermott delivers an immense, brilliant novel about the limits of faith, the power of sacrifice, and the cost of forgiveness . . . It’s the thread that follows Sally’s coming of age and eventual lapse of faith that is the most absorbing. Scenes detailing her benevolent encounters . . . are paradoxically grotesque and irresistible . . . McDermott exhibits a keen eye for character.” – Publishers Weekly

“Everything that her readers, the National Book Award committee, and the Pulitzer Prize judges love about McDermottt’s stories of Irish-Catholic American life is back.” – Kirkus Reviews

Wonderings, interactions in the city and vocation in service as a nun.
If you like a great quality of sentences and spotlight on lives in service of others devoutly.
Prose poetic and sentences that display great order of words displaying characters, deciphering odd passages of time, peculiarities and melancholy passage of time, a low meandering haunting tale of things past, failings and hopes, beliefs, lives doings and undoings.
Something that will have something to ruminate in one heart and mind.
She may have you think about past masters like with Joyce’s Dubliners and Flannery O’Connor’s writings.
Irish American characters and catholic things with some death, with some very human traits of vulnerabilities and temptations, with devotions to God and love to people in the balance with tragedy.

His trouble was with time. Bad luck for a trainman, even on the BRT. His trouble was, he liked to refuse time. He delighted in refusing it. He would come to the end of a long night, to the inevitability of 5 a.m.—that boundary, that abrupt wall toward which all the night’s pleasures ran (drink, talk, sleep, or Annie’s warm flesh)—and while other men, poor sheep, gave in every morning, turned like lambs in the chute from the pleasures of sleep or drink or talk or love to the duties of the day, he had been aware since his childhood that with the easiest refusal, eyes shut, he could continue as he willed. I’m not going, he’d only have to murmur. I won’t be constrained. Of course, it didn’t always require refusing the whole day. Sometimes just the pleasure of being an hour or two late was enough to remind him that he, at least, was his own man, that the hours of his life—and what more precious commodity did he own?—belonged to himself alone.

The day and time itself: late afternoon in early February, was there a moment of the year better suited for despair? Sister herself had had the very same thought earlier today, during her long hours of begging in the drafty vestibule. We’re all feeling it, she’d thought—we being all who passed along the street and in and out of the store, wet-shouldered, stooped, all who saw her and pretended not to, all who scowled and all (though not very many on this dank day) who reached into a pocket or a purse as they approached—we’re all feeling it, she’d thought, in this vale of tears: the weight of the low sky and the listless rain and the damp depths of this endless winter, the sour smell of the vestibule, the brimstone breath of the subway, of the copper coins, the cold that slips in behind your spine and hollows you out at the core. Six and a half hours she’d sat begging today, so weighted by the weather and the time of year that she’d been unable to stir herself from her perch to face the daily humiliation of making use of the store’s public stalls. And so she had left her chair an hour earlier than usual.

She was sixty-four that year, but the stiffness in her back and her knees and the arthritis in her hands on these damp days, not to mention the more recent, arbitrary swelling of her ankles and her feet, had begun to limit her usefulness. More and more she was sent out with her basket to beg rather than to nurse. She kept her dissatisfaction with the arrangement to herself, which meant she complained only to God, who knew how she felt. Who had sent her here.

What greater torment for a man whose sin was suicide than to be trapped forever in the body he’d sought to shed?

She turned to the window. The train was making its way through the tunnel that would lead them out of the city, passing through flashing columns of darkness and light. Of course, she had been riding subways all her life. She was as accustomed to being underground as any New Yorker. But that wing-stroke of terror—she actually reached up to touch her hat as if it had been somehow altered—reverberated. It seemed to rattle through her bones. Never before, gone underground, had she thought to wonder about the capacity of the steel beams and the concrete, or the genius of the sandhogs and the engineers, to keep earth and rock and water from coming down on their heads. She had never before considered the fearful, foolish miracle of moving through this hollowed-out place. Never before equated its rushing darkness, its odor of soot and soil and steel, with the realm of the dead, the underside of bright cemeteries—the cemetery, for instance, where her father was, had always been, in sunshine and in rain, through all her bustling days as she went blithely down the subway steps or down into the convent basement . . . She looked through the train window to the hollowed-out darkness. She told herself the soul rose, of course, but until the last day, didn’t the body pass its time here, in this dark underside of the bright world? Why had she never thought of this before? Her father’s body waited down here, in stillness, looking much as it had when it last saw the sunlight: same clothing, same hair, the same patient, folded hands. No shoes—someone at school had told her this—and, slowly, of course, flesh fallen away from bone. And then full daylight broke suddenly upon the train—explosive, thunderous. She may have jumped.

They ate in silence. All was tasteless in her mouth. She felt again the movement of the train beneath her. If she closed her eyes, she knew, she could make herself believe she was still on board, in the suffocating darkness, looking out to this dancing light—this room, this day, her mother’s sure hands, her living presence, her happiness—looking out at it all with what might have been her father’s own eyes: envious, lonesome, buried, bereft.

Her mother lived in mortal sin, skimmed the precipice of perdition with every step she took, every breath. Down the stairs she went in the morning, alone now, out into the teeming street, trolleys and trucks, cars veering, mad strangers jostling her at every corner, and no daughter beside her to serve as extra eyes. This was how her dangerous days now ran. Over to the convent, down another set of stairs. Furnace moaning. Mangle rattling. And what if fire or flood should trap her there? Boiled water scald her? What if the poison on Sister Illuminata’s shelves should find its way into her tea? Or pneumonia, tuberculosis, flu, transfer itself to her lungs from the putrid wash water of a dying woman’s linen? And the days growing darker now. And the way home sometimes slick with rain. The stolen afternoon with Mr. Costello, ham and eggs and the tumbled bed in the cold and waning light, black sin upon black sin. And then the long night with no one else in the apartment—did her mother check that the oven was turned off, as they always used to do when Sally was young, because of Jim? Was she careful stepping down from the chair when she reached up to the transom above the door? Would anyone hear her if she cried out in the night, clutching her heart? The devil waited at her mother’s heels, his pointed fingertips rimmed with grime, waited to catch her as she moved through her dangerous days, a fruit ripe for the plucking (she had heard the expression in a sermon once). Her mother was in a state of mortal sin, and if she were to die now, nothing would keep her from falling forever into the devil’s arms.

Liz Tierney preferred the bright distractions of living. She liked a good fight. She liked a long talk with plenty of gossip in it. She liked her husband when his passions were at high tide, and her children when they were rocking the boat: running, or laughing, full of outrage, full of schemes. She liked the sound of many voices in her house—liked it better still when they rose in a chorus of song. She liked stories of sin far better than tales of virtue. She liked the salty taste of contradiction on her tongue. She hated idleness. And long silences. She hated to see anyone doing anything alone. When Sister Lucy appeared at her door for the second time in nearly twenty years, Sally all bedraggled beside her, not gone to the convent after all, Mrs. Tierney was quietly delighted by the news of Annie’s stolen afternoons—……., no less.

Reviewed by Lou Pendergrast on 20 October 2017