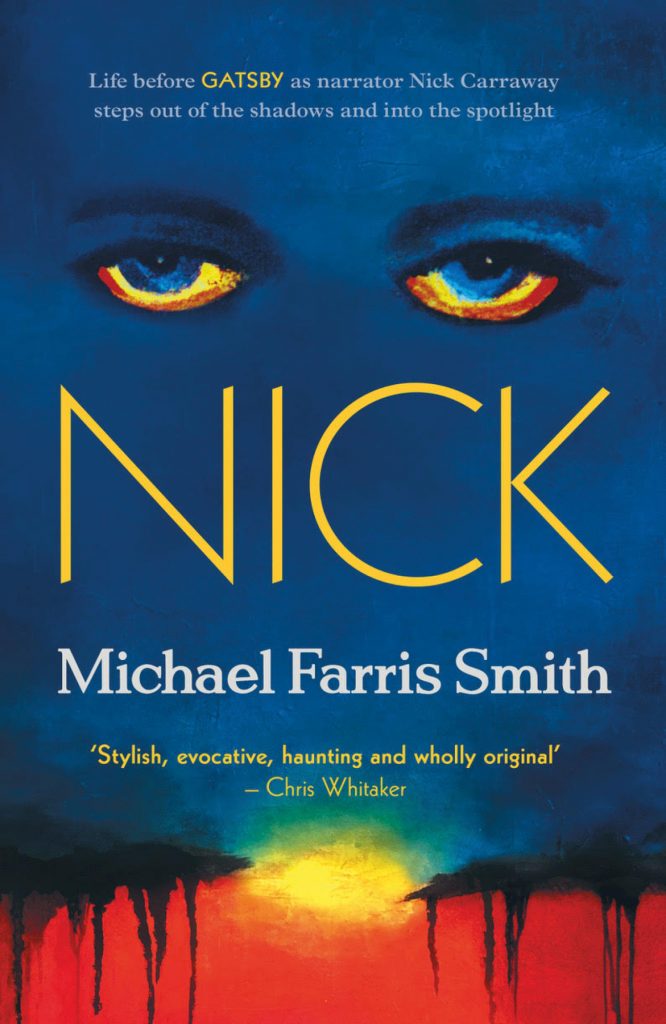 Before Nick Carraway moved to West Egg and into Gatsby’s world, he was at the centre of a very different story – one taking place along the trenches and deep within the tunnels of World War I.

Floundering in the wake of the destruction he witnessed first-hand, Nick delays his return home, hoping to escape the questions he cannot answer about the horrors of war. Instead, he embarks on a transcontinental redemptive journey that takes him from a whirlwind Paris romance – doomed from the very beginning – to the dizzying frenzy of New Orleans, rife with its own flavour of debauchery and violence.

An epic portrait of a truly singular era and a sweeping, romantic story of self-discovery, this rich and imaginative novel breathes new life into a character that many know only from the periphery. Charged with enough alcohol, heartbreak, and profound yearning to transfix even the heartiest of golden age scribes, Nick reveals the man behind the narrator who has captivated readers for decades.

“A dark and often gripping story that imagines the narrator of The Great Gatsby in the years before that book began…Smith is a talented writer known mainly for his gritty evocations of violence, struggle, and loss…The new Nick is a man fully realized, with a mind tormented by the war and by a first love that waned too fast to a fingernail moon of bitter memory…A compelling character study and a thoroughly unconventional prequel.”
-Kirkus

“Noir is as adaptable as a writer dares to make it, which Smith shows in this compelling prequel to The Great Gatsby.”
-Bill Ott, Booklist

“Anybody who believes that the war is over when the enemy surrenders and the troops come home needs to read Michael Farris Smith’s masterful new novel NICK. Its stark, unvarnished truth will haunt you.”
-Richard Russo, Pulitzer Prize-winning author of EMPIRE FALLS and CHANCES ARE¿

“With precise yet lyrically striking prose, Michael Farris Smith weaves a tale of love, loss, the lasting trauma of war, that deeply inhabits the damaged psyches of an array of people. The title figure of Nick offers a soul for the ages, one that finally and deftly slips into the canon.”
-Jeffrey Lent, author of the bestselling In the Fall and Before We Sleep

“Nick is, sentence by sentence, scene by scene, an atmospheric masterpiece of imagination and prose. With scenes that take your breath away and forget to give it back, Smith takes us on an immersive and redemptive journey that travels from the trenches of the Great War, to Paris, to New Orleans and beyond.”
-Patti Callahan, New York Times bestselling author of Becoming Mrs. Lewis

“Stylish, evocative, haunting and wholly original, Michael Farris Smith has paid tribute to a classic and made it his own. A remarkable achievement that should sit at the very top of everyone’s must-read list.”
-Chris Whitaker, author of We Begin at the End

“Every once in a while an author comes along who’s in love with art and the written language and image and literary experiment and the complexity of his characters and the great mysteries that lie just on the other side of the physical world, writers like William Faulkner and Cormac McCarthy and Annie Proulx. You can add Michael Farris Smith’s name to the list.”
-James Lee Burke, New York Times bestselling author and two-time Edgar Award winner

Isolation and bewilderment, the bad days and nights Nick faced, his crossing paths with a few main characters like Collette and Judah, from Paris to Frenchtown and eventually Minnesota home again, captured with skill in this narrative.
That tale of war surviving and getting back and facing what was left behind, the love, the lost love, the new friendships, and the new friend with whom he has empathy with, the eyes meet and there is a common understanding of pain and the war being there and seen many terrible things.

Many moments of emotion, thoughts and rumination, vividly and empathically immersing the reader in the world of Nick with the authors careful good crafting with words and sentences that demand re-reading.
This world before he came to meet the man Gatsby, when he went to war, backrooms of brothels, and walking the streets following Paris girls he replaced for the one he lost.
These aspects of the tale may have the reader want to open the crack of a copy of The Great Gatsby for a re-read, as I am one of many including the author of this book who loves the tale peened by Fitzgerald.

That arrival next to Gatsby is signalled with this passage near finality of the tale, “The cottage was situated in a quiet and upscale community on a strip of island that stretched east from New York City. It was flanked by two mansions and Nick had the feeling on first sight of the cottage that he was moving into the servant quarters.”
There is another few sentences right near the end where a silhouette comes into view that can only be one person, it is something simple but great to read of and arise to in its ending of this chapter of Nick’s life, bravo Michael Farris Smith you stole my heart for a time.

“The morning of the fog, there was no light slashing across the statues of saints and there were no children. Only him and her and the singing man. She sat with him with her legs crossed and her hands flat on the table waiting for Nick to touch them and she said I want to see you in the morning when you wake. She had said this to him before he slept each of the last seven nights, the only seven nights he had known her, the longest he had ever spent time with any woman.”

“Walking along the river in the twilight when the lights first appear and there is both sadness and promise in that wonderful vagueness of day when time holds and anything seems possible.
And then those seven days and nights were gone and they sat together in the café and stared at one another and then stared out into the fog. Her hands waiting. His train ticket was stuck in the breast pocket of his uniform and she said I want to see you in the morning when you wake.”

“Some ran away and some played dead and others had long been void of humanity and ripped and shredded like barbarians that needed blood to survive.”

“And this was the worst time of day. After the fight and after the recovery and before nightfall. Those who remained waited for the sounds and they came, the voices from no man’s land. The calls for help. The strained cries of dying. The sounds of pain and desperation and begging and pleading. Voices so close but so far away. There could be no help and the voices were already in their graves and they knew it. They knew it because they had sat and listened to the same cries. The same pleas. At the same time of day. There was nothing that could be done for them now but wait for the end but that never kept the voices from crying out until the fall of day, into the earliest of night, through the dark.”

“He lived in a neighborhood of sidewalks and shade trees. Houses were white with black or forest green shutters and window boxes hung from porch rails and first floor windows. Women swept the sidewalks wearing aprons and men in ties with coats slung over their arms picked up the newspaper from the front lawn as they got out of their cars in the late afternoon and went inside to see what was for supper. Children rode bicycles in the street and a busted nose from a bad hop in a stickball game or the anxiety of falling in love for the first time was the height of trouble.”

“He was as far removed from who he was and what he had known. In another country and with this woman and he felt himself awakening from a long dream as the hours with her seemed to both stand still and race by. He was in another country where he had been brought to kill and in the midst of that he had found this city and he had stepped away from the killing and the smell of the dead and she was some strange part of all that shrugging off.”

“It was the war beneath the war. While men and machines destroyed one another above the ground, hundreds of feet below the surface miles of tunnels twisted and weaved and were busy with men crawling on their hands and knees. Working in absolute silence. In candlelight or maybe in the pitch black. Trying to hear and kill before being heard and killed. The Germans digging one way and the Allies digging the other. Hundreds of human moles burrowing and clawing their way through the French underground.”

“Nick had thought that he was helping an old man, he could see now that he wasn’t. He looked closely at the man’s eyes and face and saw that the man was no older than himself.”

“It is a big thing to ask someone who doesn’t understand. But he understands. He has the eyes. He has the voice of the uncertain. He has his own secrets. And if there is one thing the lost are able to recognize it is the others who are just as wounded and wandering.”

“He sat leaning back on extended arms and waited for the sunrise. He watched the world awake and he looked over toward the pier of the great mansion to his right. The shifting light of night to day and the mist from the water played with his eyes but he thought he saw a figure at the end of the pier. Nick watched for movement but it remained still. A silhouette waiting for dawn. But even in silhouette Nick thought that the figure seemed to hold some magical stature, as if a fairytale were being whispered into his ear and his mind creating the vision for it.”