My First Wife by Jakob Wasserman

My First Wife by Jakob Wasserman

“My First Wife” is the intense, powerful account of a marriage – and its ruinous collapse – translated by the award-winning translator of Alone in Berlin, Michael Hofmann. It is the story of Alexander Herzog, a young writer, who goes to Vienna to escape his debts and a failed love affair. There he is pursued by book-loving Ganna: giddy, girlish, clumsy, eccentric and wild. Dazzled and unnerved by her devotion to him, and attracted to the large dowry offered by her wealthy father, he thinks he can mould Ganna into what he wants. But no-one can control her troubling passions. As their marriage starts to self-destruct, Herzog will discover that Ganna has resources and determination of which he had no idea – and that he can never escape her. Posthumously published in 1934 and based on the author Jakob Wassermann’s own ruinous marriage, “My First Wife” bears the unmistakable aura of true and bitter experience. It is a tragic masterpiece that unfolds in shocking detail. Now this story of rare intensity and drama is brought to English readers in a powerful new translation by Michael Hofmann. 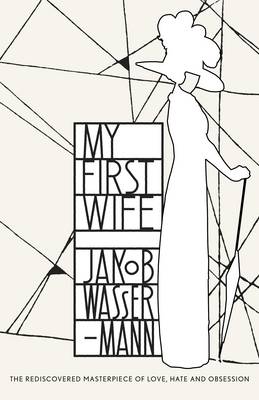 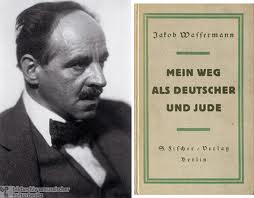 Jakob Wassermann (1873-1934) was a prominent – and towards the end of his life bestselling – German-Jewish wrtier who lived mostly in Vienna after 1906. Wassermann was most renknowed for his fiction but also wrote plays, biographies and a memoir My Path as a German and a Jew. He was friends with Rainer Maria Rilke, Thomas Mann and many other prominent writers of the time. His books were burned and forbidden by the Nazis starting in 1933. My First Wife is undoubtedly based in part on Wassermann’s own troubled marriage to Julie Speyer.

Excerpt from the afterword.
“My first wife is the true account of Jakob Wesserman’s first marriage to Julie Speyer of Vienna, with almost nothing omitted or changed.”

When reading this I was unaware of this truth, this fact makes the story more compelling of a well written story. Uncomplicated writing where the words flow of the age into an enjoyable effervescent story. With the stories humble content of only a few cast of characters one man and two women he has captured my attention and hooked me right from the first paragraph.
A credit to Penguin publishers for bringing this to my attention for review and re-printing this with a great translation from the German language in a wonderful quality presentation in the printing and binding. This a story for any era written in the 1920?s to 1930?s that holds no Lessening of its great reading due to age.The first wife is a character who you would wish to have a very uneventful end due to her entrapment, lies and trickery. The end product of reading this could be the putting off of marriage for many readers who are wanting to be married, they may reconsider due to the whole commitment and the legalities that the main protagonist found himself lost in.

I would have not expected to like this story so much right to the end. Great writing and he connects with the reader a cut above many modern writings.
A very human tragedy spilling out on the pages that in the end was a tale from the authors real life, that holds close to his heart and gives the story that extra life to it.
Due to the authors death there was never a continuation of the main protagonists life. I would have loved to see how his future panned out in the pursuit of love and happiness.
This was written in the days of Freud being alive and writing and I sense a physiological approach to the writing here with questions on relationships, trust, and love and success and failure as a writer or any man in Vienna of that time.
One question I leave with the possible reader of this story is..
Did Alexandre tame the wild Ganna?

“There, in the valley that had become home to us, we were allowed to forget the world in flames. We weren’t mocking the war; rather it became subsumed in nature. When the guns’ thunder boomed up to us out of the south, it sounded like God’s anger about a humanity that vandalised his creation; the glaciated peaks were like bolted green gates at which human dying stopped. Everything belonged to the two of us, the forests, the lakes, the bridges, the white footpaths. There were starlit evenings when the trembling firmament sprinkled golden flakes on the bed of our love, and rainy nights that seemed they must quench all the flaring hatred of the world.”

“All together, they would make up an uninterrupted conversation going over many days. Put on record, they would represent the exhausting and perspectiveless efforts of two people to get something from one another that it wasn’t in the others power to give. One seeks to tear a band; the other, seeing belatedly how cracked and holey it is, wants to patch it. One wants to leave the cold hearth; the other claims the fire is still burning, a holy flame, to extinguish which were an act of godliness. One is coming to terms with the past; the other won’t accept the reckoning and is whimpering for more credit. Conversations as old as the world, as sterile as pebbles, as agonising as toothache. Here, they were given a new point and terrible amplitude by Ganna’s character and methods.”

“Caught in this schism, she was ever more dissatisfied, excitable, disputatious, confused, bewildered. Humanity, where she was concerned, was divided into two camps: there were her supporters and her opponents. And in the middle stood this lightsome guides to fortune and triumph,the lawyers. Of course that was only true of those lawyers she had taken on; those of the other side were the dregs of mankind.”

“Not a single chink of light. A hopeless tangle of proposals, measures, discussions, euphemisms, accusations, conjectures, cunning distortions, coarseness and hair-splitting. The lawyers inundate each other with letters, inundate their clients with letters, inundate each other with more letters. Typewriters clatter, telegraphs click, telephones bleat, messengers run- each of the parties involved is raking it in, all except the one that has to pay for such endeavour, the costs of the materials and the nervous strain with his own dearly acquired money, his tranquility, his blood and his life, and who gets nothing return except- more paper.
And always at the back of everything -Ganna, unmoved, immovable and brazen, the deceptive perhaps always on her lips, the rigid No in her heart, the goddess of discord like the grim Ate, misconceived daughter of Zeus. Undaunted and indefatigable, she shores up her mad world, which has so surprisingly many points of contact with the real world and at the same time bears the stigma of doom.”

Reviewed by Lou Pendergrast on 15 September 2012