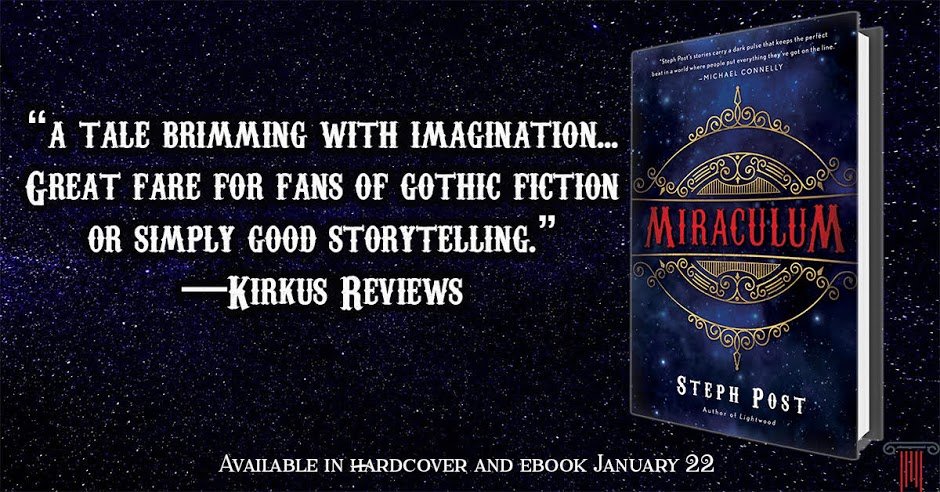 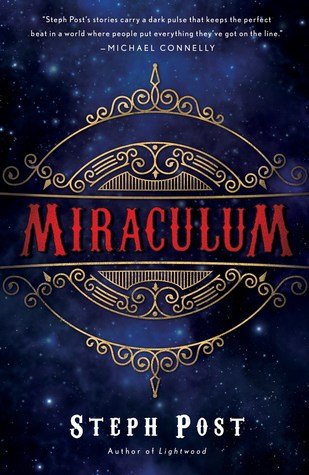 The year is 1922. The carnival is Pontilliar’s Spectactular Star Light Miraculum, set up on the Texas-Louisiana border. One blazing summer night, a mysterious stranger steps out onto the midway, lights a cigarette and forever changes the world around him. Tattooed snake charmer Ruby has traveled with her father’s carnival for most of her life and, jaded though she is, can’t help but be drawn to the tall man in the immaculate black suit who has joined the carnival as a geek, a man who bites the heads off live chickens. Mercurial and charismatic, Daniel charms everyone he encounters but his manipulation of Ruby becomes complicated when it no longer becomes clear who is holding all the cards. For all of Daniel’s secrets, Ruby has a few of her own. When one tragedy after another strikes the carnival, and it becomes clear that Daniel is somehow at the center of calamity, Ruby takes it upon herself to discover the mystery of the shadowy man pulling all the strings. Joined by Hayden, a roughneck-turned-mural-painter who has recently reentered her life, Ruby enters into a dangerous, eye-opening game with Daniel in which nothing and no one is as it seems and yet everything is at stake.

“This is a tale brimming with imagination and rich in melancholy as it pits the natural against the supernatural and touches on what it means to be human. Great fare for fans of gothic fiction or simply good storytelling.”
-Kirkus Reviews

“Ruby the Snake Charmer is much like the author; keen-eyed, smart and tattooed. Miraculum is a vividly detailed traveling circus, its midway pulsing with a bizarre and alluring cast of clowns, hustlers, gamblers, freaks and cootch dancers. The Man in the Black Suit is as smooth and charming as Fred Astaire but far more dangerous than any viper, his venom threatening Ruby’s entire world. Steph Post’s writing is the Big Top. Buy a ticket. Seats are going fast. “
-Joe Ide, award-winning author of IQ

“Readers will content themselves with Post’s rich, atmospheric prose and displays of dark magic while they wait. Ruby has strange powers of her own, and the ending, with animal howls of rage, is all the more effective for the suddenly understated prose.”
-Booklist

“Steph Post’s Miraculum grabs hold of you from the very first page and refuses to let go until the very end. The marvels, as Daniel himself declares, just keep coming.”
-Aaron Mahnke, Creator of Lore

“Fans of Erin Morgenstern’s Night Circus will inevitably find this a cousin of their favorite…readers of Katharine Dunn’s Geek Love or Neil Gaiman’s American Gods are likely to enjoy it.”
-Library Journal

“Steph Post is a great new discovery. Her stories carry a dark pulse that keeps the perfect beat in a world where people put everything they’ve got on the line.”
-Michael Connelly

“WALK IN THE FIRE is the best book by an author rightly compared to Harry Crews and Larry Brown, but who blazes a path all her own. You do not know the dank heart of the great state of Florida unless you’ve read Steph Post.”
-Kent Wascom, author of The Blood of Heaven

“WALK IN THE FIRE slings the Cannon family back on the page like a Molotov cocktail through a window. Few writers could coax a cast of characters this vast onto a single stage and orchestrate their story with such mastery. Post own the genre of North Florida noir.”
-David Joy, author of Where the Light Tends to Go and The Weight Of This World

“Sizzling…Post has a real knack for creating a complex plot that maintains its drive through sweat-slicked settings that range from raucous Daytona Beach strip clubs to the kind of lonesome roads where nothing good happens.”
-Tampa Bay Times

“Steph Post’s WALK IN THE FIRE is a wonderful accomplishment, teeming with a refreshingly unexpected cast of characters, and an original story in an unlikely setting. It’s a wild ride through the dark side of the sunshine state.”
-David Swinson, author of The Second Girl and Crime Song

“With wicked dexterity Steph Post gets at the deepness in living and loving, as well as the good and bad within us all. But WALK IN THE FIRE also takes us to dark places where evil reigns and the characters struggle with their worst and best intentions. Unputdownable crime fiction with a Southern Twist, WALK IN THE FIRE will continually surprise you with the speed of its plot and the mythic proportions of the story it unfolds.”
-Natalie S. Harnett, author of The Hollow Ground

“We tend to think of Florida as happy, warm, and sunny, but in Steph Post’s wonderfully written new novel, A Walk in the Fire, she shows us a slew of cold-blooded folks and dark places. She writes characters so well I was very happy, after tearing through the book, to remember they only existed on the page. Excellent.”
-Erik Storey, author of Nothing Short of Dying

“Steph Post writes with an intensity all her own. Greed, power, and desperation collide to make us ask, what choices do we make when it seems like none are left? Walk in the Fire captures backwoods Florida in all its grit and glory. This is a superbly original thriller?as sleek, wild, and dangerous as any rattlesnake.”
-Erica Wright, author of The Red Chameleon

“Choose your superlative: compelling, exciting, thrilling. They all apply. In Walk in the Fire, Steph Post delivers more of her trademark style with a scorching plot burning around a beating heart and compelling characters you won’t soon forget. The perfect blend of backwoods crime and family drama, southern fried and served hot.”
-Eric Beetner, author of Rumrunners and Leadfoot

“Steph Post’s prose is lyrical and evocative. Her depiction of hardscrabble life in rural Florida is so effective, you’ll wanna lock the doors and crank up the AC. But where LIGHTWOOD truly excels is in illuminating the ties that bind?and stretching them well beyond their breaking point.”
-Chris Holm, award-winning author of The Killing Kind

“Brilliant…Lightwood solidifies Steph Post as the official voice of working class literature in Florida, akin to what Daniel Woodrell has done for Missouri, or Ron Rash for the Carolinas.”
-Brian Panowich, bestselling author of Bull Mountain

“Post paints a large, vivid cast…Post’s Florida is rather farther north than the world of Carl Hiaasen’s fiction, but they share the dark comedy, intricate plotting and strong sense of paltry sin and mordant evil. Readers who like Hiaasen should find “Lightwood” well to their taste.”
-Wilmington Star-News

“Grabs the attention and offers up some memorable lines. (Post) proves that even a former prison inmate can rise up to be a strange, yet believable hero.”
-Suspense Magazine

“With spot-on characterizations and dialogue, Post explores the strength of family, religion, and vengeance in an absorbing literary mystery.”
-Booklist

“(A) gritty, propulsive crime novel…keeps up a headlong pace as the Cannons, the Scorpions, Sister Tulah and other forces clash brutally all around Judah and Ramey. You might not want to visit Silas in real life, but it makes a fine setting for this twisted and compelling tale.”
-Tampa Bay Times

In the glorious vibrant things under the big top of the carnival, all the enchanting things occurring, one of tragedy arises, an act of one ending things.
This loss leaving a job opportunity arise for position of Geek of carnival.
Then more things go wrong.
The author transports the reader to a bygone time with Buster Keaton and Robin Hood with Douglas Fairbanks showing on the big screen, under the big top into carnival lives and one exceptional snake charmer, Ruby, with good storytelling with the mystical and mythical of a fantastic fantasy extravaganza.
A memorable affair of gothic mystery tale with lead character Ruby Chole aka Esmeralda the Enchantress, with whom one will ultimately discover that, “her fate was tied to the carnival as surely as the ink was etched into her skin and she could not escape it,” with a greater tapestry and message formed in the reader with that of “Pawns can become queens.”
An enchanting gothic tale of discovery, purpose and paths, those leading through darkness and light, worldly and other worldly. 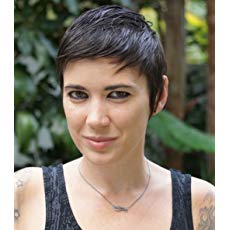 Steph Post is the author of the novels Walk in the Fire, Lightwood, A Tree Born Crooked and the forthcoming Miraculum. She graduated from Davidson College as a recipient of the Patricia Cornwell Scholarship for creative writing and a winner of the Vereen Bell writing award for fiction. She holds a Master’s degree in Graduate Liberal Studies from the University of North Carolina Wilmington. Her work has most recently appeared in Garden & Gun, Nonbinary Review, CrimeReads and the anthology Stephen King’s Contemporary Classics. She is a regular contributor to Alternating Current and LitReactor and has published numerous book reviews and author interviews. She has been nominated for a Pushcart Prize, a Rhysling Award and was a semi-finalist for The Big Moose Prize. She lives in Florida.

Reviewed by Lou Pendergrast on 14 January 2019