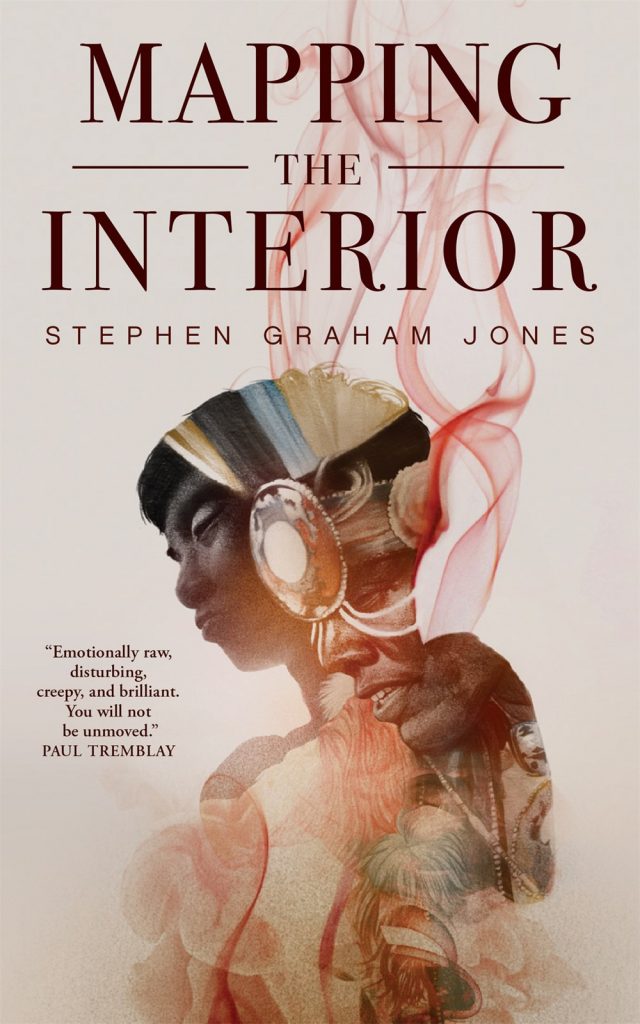 Walking through his own house at night, a twelve-year-old thinks he sees another person stepping through a doorway. Instead of the people who could be there, his mother or his brother, the figure reminds him of his long-gone father, who died mysteriously before his family left the reservation. When he follows it he discovers his house is bigger and deeper than he knew.

The house is the kind of wrong place where you can lose yourself and find things you’d rather not have. Over the course of a few nights, the boy tries to map out his house in an effort that puts his little brother in the worst danger, and puts him in the position to save them . . . at terrible cost.

Praise For Mapping the Interior:

“Stephen Graham Jones’s Mapping the Interior is a triumph. So emotionally raw, disturbing, creepy, and brilliant. You will not be unmoved. You will not be unaffected. It’s a ghost story in the truest, darkest, most melancholy sense. Stephen knows we are haunted by our parents, our families, and our shared pasts as much as we are haunted by ourselves; haunted by who we were, who we become, and who we could’ve been.”
-Paul Tremblay, author of A Head Full of Ghosts and Disappearance at Devil’s Rock

“Stephen Graham Jones’s chilling Mapping the Interior is part S.E. Hinton and part Shirley Jackson. It’s about being young and broke, and that moment when you first wonder who your parents really are. The answers are out there, but they will leave you haunted forever.”
-Richard Kadrey, author of the Sandman Slim series

“Mapping the Interior is Jones at his best.”
-PANK Magazine

“A chilling tale told from a less-heard perspective, Mapping the Interior is the type of horror story you keep on your shelf for regular hauntings.”
-Rue Morgue

“Wonderfully refreshing and not to be missed.”
-Publishers Weekly

A visceral first person narration within the realm of a boy of twelve with the complexities of loss and then reuniting in ways over time from being four and father passed with brother and mother with new discoveries, fears, and realizations.

Delivered with the right needed words and language, the necessary elements evoking a young mans peripheral and meeting between realms, meeting fears, shock, and realities contained, with all responsibilities of being big brother of a sick brother and man of the house.

With the sleepwalking, seizures, action figures, and detective shows present and father not, the two young Native American lives of disquietness and chaos, dead and living, cycling forward in potent words choreographed with the right order on the page providing immersive haunting reading power.
A father and son story, one deciphering of a father and his legacy, doings, ones not past, amalgamating into surreal and phantasmagoric work.
Well deserved of the accolades and Bram Stoker Award.

Reviewed by Lou Pendergrast on 14 October 2019