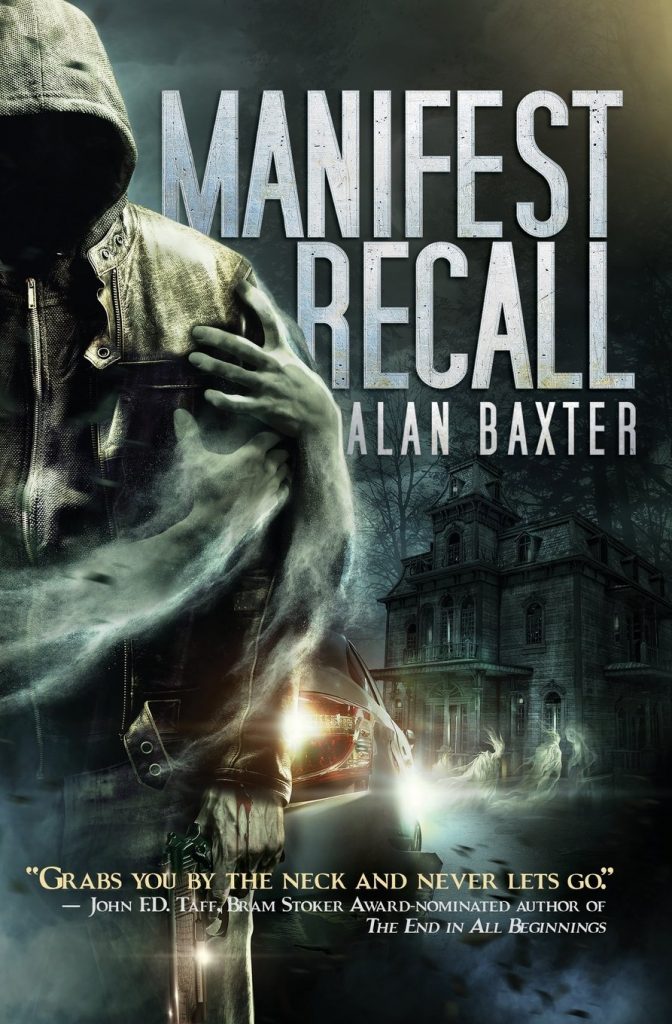 Following a psychotic break, Eli Carver finds himself on the run, behind the wheel of a car that’s not his own, and in the company of a terrified woman he doesn’t know. As layers of ugly truth are peeled back and dark secrets are revealed, the duo find themselves in a struggle for survival when they unravel a mystery that pits them against the most dangerous forces in their lives.

A contemporary southern gothic thriller with frightening supernatural overtones, Alan Baxter’s Manifest Recall explores the tragic life of a hitman who finds himself on the wrong side of his criminal syndicate. Baxter’s adrenaline-fueled approach to storytelling draws readers into Eli Carver’s downward spiral of psychosis and through the darkest realms of lost memories, human guilt and the insurmountable quest for personal redemption.

“Manifest Recall grabs you by the scruff of the neck from word one and doesn’t let go. It’s fast paced, bad people doing bad things to other bad people. I gobbled it down in two nights. You should, too. Highly recommended!”
– John F.D. Taff, Bram Stoker Award-nominated author of The End in All Beginnings

“Alan Baxter’s fiction is dark, disturbing, hard-hitting and heart-breakingly honest. He reflects on worlds known and unknown with compassion, and demonstrates an almost second-sight into human behaviour.”
– Kaaron Warren, Shirley Jackson Award-winner and author of The Grief Hole

“Alan Baxter is an accomplished storyteller who ably evokes magic and menace.”
– Laird Barron, author of Swift to Chase

“Alan’s work is reminiscent of that of Clive Barker and Jim C. Hines, but with a unique flavour all of its own.”
– Angela Slatter, World Fantasy, British Fantasy and Aurealis Award winner

Grey Matter Press, the multiple Bram Stoker Award-nominated independent publisher, is proud to present one of the best supernatural thrillers of the year.

A well done kaleidoscopic amalgamation of supernatural, noir, thriller, and horror elements.
A heads up caution, profanities and violence involved.
One Eli Carver, a twenty-eight year old man, unravels his world before the reader with some unreliable narration at times, he cannot quite remember things, but slowly things come to him from the past in many ways.
Eli, since killing a man in New Orleans, has never been the same and so the spiral downward is set in motion. There is one major antagonist in this tale, the cause and effect of many bad things, the bad guy in this tale, too many hands in too many pockets.
This may feel like, Quentin Tarantino characters riding through The Shining with some music like Ring of Fire by Jonny Cash overshadowing it all, as there is a ring of fire left on his trail and the ring will close you hope.
Punches in the narrative and some straight to the meat storytelling that keeps you in the reading to the end with one helluva of whirlwind of the mind high-octane charged explosive ride.

Reviewed by Lou Pendergrast on 06 January 2019