Lock Every Door by Riley Sager 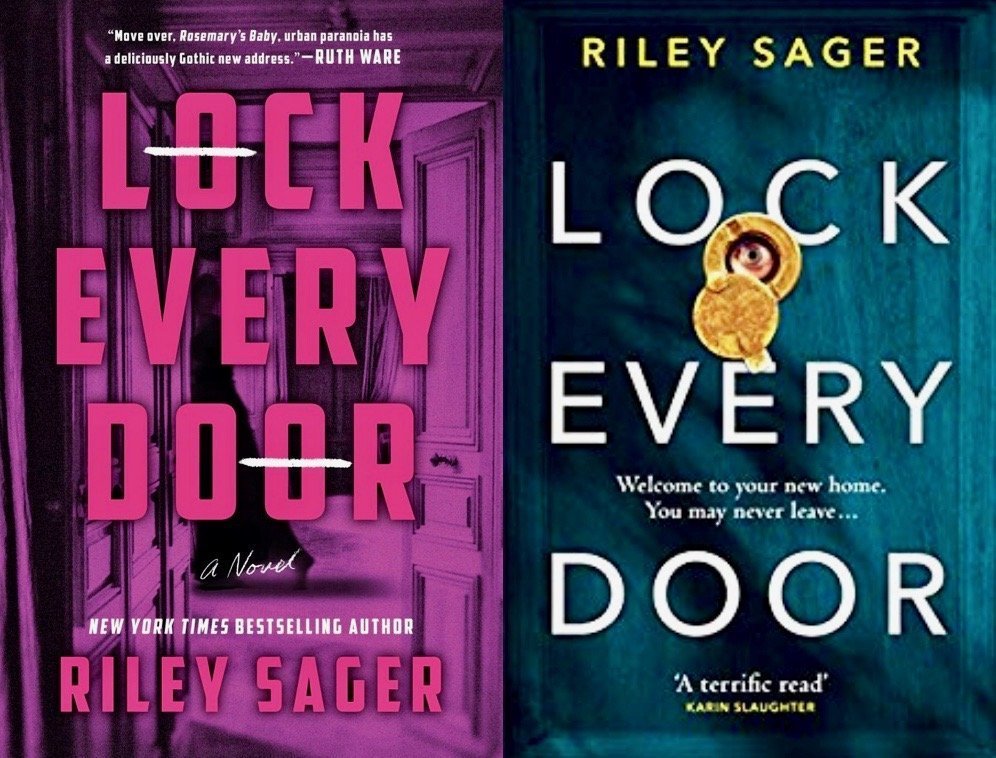 The next heart-pounding thriller from New York Times bestselling author Riley Sager follows a young woman whose new job apartment sitting in one of New York’s oldest and most glamorous buildings may cost more than it pays.

No visitors. No nights spent away from the apartment. No disturbing the other residents, all of whom are rich or famous or both. These are the only rules for Jules Larsen’s new job as an apartment sitter at the Bartholomew, one of Manhattan’s most high-profile and mysterious buildings. Recently heartbroken and just plain broke, Jules is taken in by the splendor of her surroundings and accepts the terms, ready to leave her past life behind.

As she gets to know the residents and staff of the Bartholomew, Jules finds herself drawn to fellow apartment sitter Ingrid, who comfortingly reminds her of the sister she lost eight years ago. When Ingrid confides that the Bartholomew is not what it seems and the dark history hidden beneath its gleaming facade is starting to frighten her, Jules brushes it off as a harmless ghost story . . . until the next day, when Ingrid disappears.

Searching for the truth about Ingrid’s disappearance, Jules digs deeper into the Bartholomew’s sordid past and into the secrets kept within its walls. What she discovers pits Jules against the clock as she races to unmask a killer, expose the building’s hidden past, and escape the Bartholomew before her temporary status becomes permanent.

Praise for Lock Every Door:

“Super eerie, this heart-pounding thriller from Riley Sager is sure to be another bestseller.”
–Bookstr, “8 Thrillers for Your Beach Bag this Summer”

“The Bartholomew is an apartment building of terrifying secrets. You’ll find startling twists and alarming surprises down every dark hallway. It’s too late to lock the doors–the horror is already inside. My favorite thriller of the year!”
–R.L. Stine, author of Goosebumps

“Lock Every Door is Riley Sager’s best book yet. Unrelentingly eerie and supremely stylish, this book had me in its grip from the first page until its shockingly twisted conclusion.”
–Cristina Alger, bestselling author of The Banker’s Wife

“All those sunny summer afternoons could use a little darkness. For a poolside thriller, check out Riley Sager’s Lock Every Door.” –-Good Housekeeping, “25 Best New Books for Summer 2019”

“I’m Jules Larsen, the product of a Pennsylvania coal town with less than five hundred dollars in my checking account.
I do not belong here. But the ad didn’t mention an address. It simply announced the need for an apartment sitter and provided a phone number to call if interested. I was. I did.”

Things people do for money, money stopping sitters fleeing and abandoning the one of the most storied residential apartment blocks in Manhattan, The Bartholomew, with gargoyles overlooking the street. Jules Larsen juxtaposition amongst rich and wealthy finds herself crossing paths and on a road of investigations on other apartment sitters as a search ensues for one who disappears.

Zeroing down to a particular fate with missing sister, missing apartment sitter.
A puzzle assembling with something afoot in this dwelling, maybe a possible pattern in the details, Is there a summoning of old or work of new?

Nicely crafted introduction of the main character Jules Larsen, there will be visceral telling, along with the grande character the Bartholomew, this one gothic mystery awaiting, haunting bad histories, and with that mention of Rosemary’s Baby by Ira Levin as inspiration in creating this, the author successfully crafting a tale with all the fear, creepiness, and trepidation in motion.

Check out the rest of my interview with the author: https://more2read.com/review/interview-with-riley-sager/

Questions on this novel:

What was the inspiration and seed behind Lock Every Door?

My main inspiration was ROSEMARY’S BABY by the late, great Ira Levin. I’ve loved the book and its film version for decades, and always thought it might be fun to do my own take on the storyline. Innocent young woman. Fabulous apartment building. Friendly neighbors that are more sinister than they first appear. Levin was a master at creating this creeping sense of dread before revealing the full horror of the situation. My goal was to do the same thing. Because he was such a big influence on me, I wanted to make him proud.

What were you trying to communicate to the reader with this tale?

First and foremost, I wanted to scare them.
And while they were being scared, I wanted to include a little message about wealth, privilege and economic disparity.

“The elevator resembles a birdcage. The tall, ornate kind—all thin bars and gilded exterior. I even think of birds as I step inside. Exotic and bright and lush. Everything I’m not. But the woman next to me certainly fits the bill, with her blue Chanel suit, blond up-do, perfectly manicured hands weighed down by several rings. She might be in her fifties. Maybe older. Botox has made her face tight and gleaming. Her voice is champagne bright and just as bubbly. She even has an elegant name—Leslie Evelyn. Because this is technically a job interview, I also wear a suit. Black. Not Chanel. My shoes are from Payless. The brown hair brushing my shoulders is on the ragged side. Normally, I would have gone to Supercuts for a trim, but even that’s now out of my price range. I nod with feigned interest as Leslie Evelyn says, “The elevator is original, of course. As is the main staircase. Not much in the lobby has changed since this place opened in 1919. That’s the great thing about these older buildings—they were built to last.”

“I’m Jules Larsen, the product of a Pennsylvania coal town with less than five hundred dollars in my checking account.

I do not belong here. But the ad didn’t mention an address. It simply announced the need for an apartment sitter and provided a phone number to call if interested. I was. I did.”

“I bound up the steps, following the corkscrew curve to a bedroom that’s even more picture ?perfect than the kitchen. Here the floral wallpaper actually works with the room. It’s the lightest shade of blue. The color of a spring sky.

Like the dining room directly below, it’s located on a corner of the building. Because this is the top floor, the ceiling slants dramatically to a peak ending at the far wall. The massive bed’s been placed so that whoever is in it can gaze out the windows flanking the corner. And just outside those windows is the pièce de résistance—a gargoyle.”

“This—right now—is my life. Here. On the top floor of the Bartholomew. Holy shit. Even more astounding is that I’m getting paid to be here. One thousand dollars every week. Money I can use to erase debt and save for a future that’s suddenly far brighter than it was a day ago. A future that’s just on the other side of that door. I unlock it and step inside.”

“For me. For my future. For the sister who has yet to return.”

Lock Every Door is the third thriller from Riley Sager, the pseudonym of an author who lives in Princeton, New Jersey. Riley’s first novel, Final Girls, was a national and international bestseller that has been published in more than two dozen countries, won the ITW Thriller Award for Best Hardcover Novel, and is currently being developed into a feature film by Universal Pictures. Sager’s second novel, The Last Time I Lied, was a New York Times bestseller.