Book Review: Legend of a Suicide by David Vann - More2Read

Legend of a Suicide by David Vann 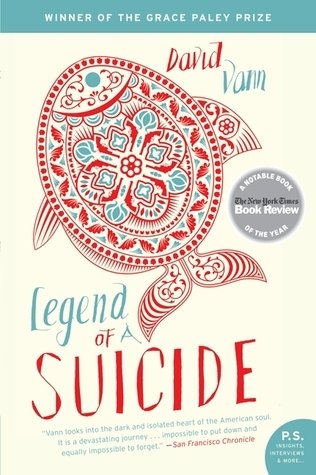 Roy is still young when his father, a failed dentist and hapless fisherman, puts a .44 magnum to his head and commits suicide on the deck of his beloved boat. Throughout his life, Roy returns to that moment, gripped by its memory and the shadow it casts over his small-town boyhood, describing with poignant, mercurial wit his parents’ woeful marriage and inevitable divorce, their kindnesses and weaknesses, the absurd and comic turning-points of his past. Finally, in “Legend of a Suicide”, Roy lays his father’s ghost to rest. But not before he exacts a gruelling, exhilarating revenge. Revolving around a fatally misconceived adventure deep in the wilderness of Alaska, this is a remarkably tender story of survival and disillusioned love.

Praise for Legend of a Suicide:

As the title suggests, the stories in ‘Legend of a Suicide’ approach a private mythos, revisiting, reinvestigating, and reinventing one family s broken past. They also transport us to wild, uncharted places on the Alaskan coast and in the American soul. Throughout, David Vann is a generous, sure-handed guide in some very dangerous territory.
—-Stewart O Nan, author of ‘Last Night at the Lobster and Snow Angels: A Novel’

One jaw-droppingly powerful, courageous and original fiction debut…As a 10th work of fiction this would be impressive; as a debut, it is remarkable
(Sunday Telegraph )

For the imagery alone and for the sentences, the book would be a treasure, but the story it tells – the story of the suicide of the author’s father – has an immediacy and sharpness made all the more special by the tone of distance in the narrative and the beauty of the writing
(Colm Toibin, Observer books of the year )

David Vann will take you by the hand and into an abyss, a dark and poignant walk into relationships. Powerful, potent quality of meaning and what had been and a stark warning on that which one can prevent treading upon the same path mentioned within these pages.
This is a story that a reader should not disappointed if they find not a happy Disney like ending. It’s raw at times but heart felt and about real lives.  Reminiscent of stories like Wise Blood by Flannery O’Connor and Feast of Snakes by Harry Crews for the writers all combine violence and beauty in lyrical and descriptive potent prose.

This novel includes in its stories contents: islands, boats, sea and fish similar to that also featured in his novel Caribou Island.

There is some part of this taken from truth, from the authors life, but the fiction and the non-fiction in the end is not the point was is real is that we see this pain all around us, marriages falling apart, children feeling loneliness and we hear sad stories and know of people who loose hope find themselves at a point they no longer wish to be part of this world.
These stories will be ones that will be hard to forget due to its poignant moments, in my mind it may remain but for being memorable of mans errors and  fall, lose of hope and fear of loneliness.

“Everything about his death was mythical from the start, and Alaska is that way for me, also.”

“I once stood in a grove of trees along one end of a lake and heard a hundred tiny pellets tap through the leaves around me like rain, so gently I could have caught one on my tongue. Then the boom over the water, John’s cry, my mother’s cry, and their arms waving. I spread my hands and waited for another. The air had so thinned out there seemed to be no distance, as if all things—the leaves, a waterline, red flannel, fields, and horizon—could be plucked by my own two fingers. The whine and squeak of mallards’ wings grew stronger, then fainter. Though I wasn’t hit, I stumbled backward in a half circle, made sure I was in full view of my running mother, and toppled into the mud. This was the first time I knew gunshot from the other end.”

“They’d tempt us with brightly colored objects—flowers, balloons, remote-controlled race cars—perform tricks with their beards and hands, call us funny names like snip, my little squash plant, ding-dong, and apple pie, and yell their stories at us day and night. Then they’d vanish, and we’d find no sign left, no mention even, as if we’d simply imagined them.”

“Roy thought for the next several days. He saw himself helping his father, making him smile, the two of them hiking and fishing and wandering over glaciers in brilliant sunlight. He already missed his mother and sister and friends, but he felt there was an inevitability to all of this, that in fact there was no choice at all.”

“Out in the channel, the lights of a convocation, twenty to thirty boats all drawn together to wait for a storm to pass, for the time when they could leave the shallows and enter open ocean again. Their arrangement puzzled in a way that pleased, also: bright floodlights high up, small cabin lights, globes everywhere across their backs exposing the great nets, buffed aluminum, floats orange and red, all intermingled and reflected on waters calm as mirrors and no horizon visible, no clear seam for the surface, for water and air, reflection and light. And the only sound that of small bells, seeming to come from much farther away, the bells high up on the lines of trawlers, the bells that signaled fish. No voices.”

“I rowed unnoticed beneath masts and sonar, bells and spotlights, rowed, I fancied, with the seamless propulsion of jellyfish in the one element, rowed past jagged rocks onto a sea nostalgic and opaque, swelling slowly, as if considering spilling over until the rim of the world lifted inevitably, slipped, and I was in a rowboat, wet from mist and shivering, hearing the slap of oars, the creaking of the locks. “

Check out is novel Caribou Island

Check out my interview with him in August 2012>>>https://more2read.com/review/interview-with-david-vann/

Reviewed by Lou Pendergrast on 03 August 2012