Last Call for the Living by Peter Farris

Last Call for the Living by Peter Farris 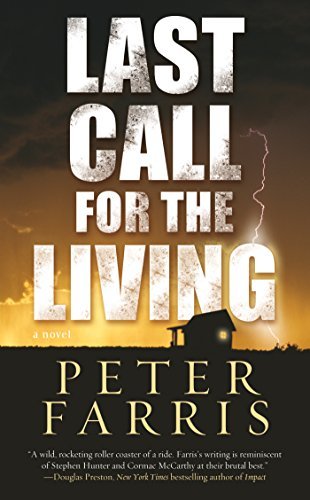 Praise for Last Call for the Living

“A wild, rocketing roller-coaster of a ride. Farris’s writing is reminiscent of Stephen Hunter and Cormac McCarthy at their brutal best.”—Douglas Preston, New York Times bestselling author of Impact

“With Last Call for the Living, Peter Farris sticks a shotgun in your face, cracks you a beer, works you over with a meat tenderizer, insults your mama, punches your junk, and otherwise gives you the wildest Southern vacation you’ve ever had. Farris has just announced himself as a major new talent in crime fiction, and he ain’t telling us politely.”—Duane Swierczynski, Anthony Award–winning author of  Fun & Games

“Last Call for the Living left blisters on my eyelids and teeth marks on my soul. Combining razor sharp prose, a tight plot and characters I could relate to, the narrative tension bites down and doesn’t let go.”—Frank Bill, author of Crimes in Southern Indiana

“This novel comes at you like an abusive parent, succors you like a mother, smacks you down like a bully, then helps you back up to see the light like a blood brother—but one cranked on meth, steeped in whiskey, and gunned-up for a final showdown. Last Call for the Living is a debut novel with true regret in its heart, and a poignant sadness at the implacability of fate. It is probably the most ballistic family values story you’ll ever read.”—David J. Schow, author of Gun Work

“Sam Peckinpah meets Flannery O’Connor in Peter Farris’s astonishingly good debut. The veracity of violence, the beauty of brutality, and the majesty of the marginalized all align like malignant stars in this disturbing, literate, and authentic novel. Last Call for the Living is the manifesto of a talent who deserves your attention.”—Grant Jerkins, author of A Very Simple Crime

Nightmares, another night has turned to day.”

Peter Farris is a new talent to take note of alongside recently Frank Bill and Donald Ray Pollock these writers waste no words and really engage you right from the start.
What should have been a usual day at work turns out to be the mark of a pivotal point in a young mans life. A bank teller Charlie a model rocket enthusiast, and a kid that many fathers would be proud to have, finds himself in a three week hostage situation after a bank heist.
This is has a fast pace and packs a punch with a motley crew of shady characters. It hooks you with the dieing need to know will Charlie make it through to safety and be of the living?
The said bank robber and hostage taker is a man whose earned fear in men, he’s part of the Aryan brotherhood, his loyalties have changed since being out of the pen. He finds himself battling wether to keep Charlie alive while on the run or just plain blow his brains away due to one very gut feeling he finds he has about this man. Something kept him from doing the kid in.
A twist of fates brought them together so to speak and just how it all pans out and the main protagonist battle with his psyche, his dark passenger, provides a page turning story of break-neck pace.
Writing with  characters of the darkest of hearts but with one light in the core of this story Charlie. Its visceral with solid prose and all the hallmarks of good writing.

MY INTERVIEW WITH PETER FARRIS >> https://more2read.com/review/interview-with-peter-farris/

Reviewed by Lou Pendergrast on 21 April 2012