Book Review: Only Killers and Thieves by Paul Howarth | More2Read

Only Killers and Thieves by Paul Howarth 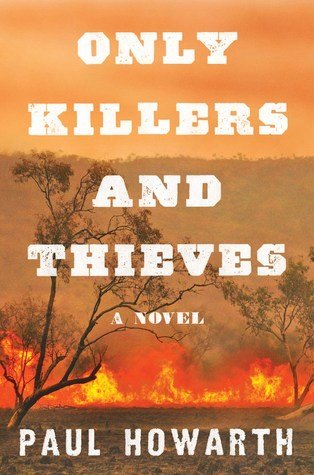 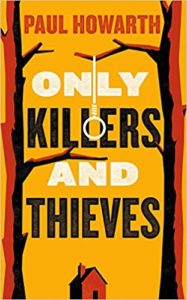 Only Killers and Thieves by Paul Howarth :

Two brothers are exposed to the brutal realities of life and the seductive cruelty of power in this riveting debut novel—a story of savagery and race, injustice and honor, set in the untamed frontier of 1880s Australia—reminiscent of Philipp Meyer’s The Son and the novels of Cormac McCarthy.

An epic tale of revenge and survival, Only Killers and Thieves is a gripping and utterly transporting debut, bringing to vivid life a colonial Australia that bears a striking resemblance to the American Wild West in its formative years.

It is 1885, and a crippling drought threatens to ruin the McBride family. Their land is parched, their cattle starving. When the rain finally comes, it is a miracle that renews their hope for survival. But returning home from an afternoon swimming at a remote waterhole filled by the downpour, fourteen-year-old Tommy and sixteen-year-old Billy meet with a shocking tragedy.

Thirsting for vengeance against the man they believe has wronged them—their former Aboriginal stockman—the distraught brothers turn to the ruthless and cunning John Sullivan, the wealthiest landowner in the region and their father’s former employer. Sullivan gathers a posse led by the dangerous and fascinating Inspector Edmund Noone and his Queensland Native Police, an infamous arm of British colonial power charged with the “dispersal” of indigenous Australians to “protect” white settler rights. As they ride across the barren outback in pursuit, their harsh and horrifying journey will have a devastating impact on Tommy, tormenting him for the rest of his life—and will hold enduring consequences for a young country struggling to come into its own.

Recreating a period of Australian and British history as evocative and violent as the American frontier era, Only Killers and Thieves is an unforgettable story of family, guilt, empire, race, manhood, and faith that combines the insightfulness of Philipp Meyer’s The Son, the atmospheric beauty of Amanda Coplin’s The Orchardist, and the raw storytelling power of Ian McGuire’s The North Water.

Praise for Only Killers and Thieves:

An Amazon Best Book of February 2018: Set in 19th Century Australia, Only Killers and Thieves is a soaring debut. When teenage brothers Billy and Tommy McBride set out to hunt the scrub around their ranch, they stumble upon a terrible scene: a lynching of two native aboriginals. Later, when they return to their home, they find that their parents have been murdered. The signs point to it being an act perpetrated by their aboriginal stockman, Joseph, and the boys are soon drawn into a hunt for him. But as they travel under the direction of land baron John Sullivan and Inspector Edmund Noone, who leads the Native Mounted Police, the boys are drawn into a revenge hunt that divides them. One brother seeks justice; the other sees justice being undone. Everything about this novel is alive—the characters, the setting, and the language. The scenes and scenery last in your mind like the best westerns. And this book deserves that comparison. — Chris Schluep for the Amazon Book Review

“Howarth’s impressive debut is a Wild West saga transported to 19th-century Queensland, Australian. The story deals unflinchingly with the brutality of Australian rule…but the heart of the story is the complicated relationship between the brothers…While this book has a historical point to make, it also works as a suspenseful mystery and a resonant bildungsroman.” (Kirkus Reviews)

“Powerful debut…the novel feels like a modern Western along the lines of Cormac McCarthy’s All the Pretty Horses. Howarth’s narrative is almost cinematic…U.S. readers will make the connection with our country’s oppression of Native Americans and gain an understanding of the fundamental racism of both former British colonies…Howarth is a novelist to watch.” (Library Journal)

“A gripping novel about conflict in the Australian outback at the turn of the century; beautifully done.” (Paulette Jiles, New York Times Bestselling Author of NEWS OF THE WORLD, National Book Award Finalist)

“I couldn’t put Only Killers and Thieves down. It does what great Westerns do, it drops you inside the ugliness and chaos of Australian frontier life, it educates and horrifies, but also it entertains. Howarth’s debut is a powerhouse page turner.”          (Willy Vlautin, author of Lean on Pete)

“Devastating and impressive debut…Howarth skillfully uses the fraying relationship between the two brothers—Billy embraces vigilantism with vengeful zeal, while Tommy is revolted by both the carnage and its effect on his brother—to illustrate the moral issues at the heart of his story. The narrative is empowered further by his searing descriptions of the outback, a drought-ridden landscape of desiccation and death that provides a backdrop as bleak and merciless as the characters who move against it.” (Publishers Weekly)

“Howarth manages to infuse the old tropes with a depth of emotion and moral complication that will stay with readers long after closing the book.” (BookPage)

“Rich in character and period atmosphere, this effective blend of family saga and historical mystery will please fans of Jeffrey Archer and Wilbur Smith.” (Booklist)

“Everywhere alive with vivid evocations of a landscape as punishing as it is beautiful and vibrant characters who would be just as at home in Blood Meridian or Butcher’s Crossing, Only Killers and Thieves compels and convinces from the start. This is a thrilling book and Paul Howarth a writer of tremendous talent.” (Laird Hunt, author of The Evening)

“. . . they’ve the Devil in them, Tommy, they’re naught but killers and thieves.”

Doings and undoings, survival, war, blood, and loss set in motion.
An unsettling relevant timeless tale coming out of Australia.
Tommy and Billy were fourteen and sixteen years old caught in a web of doings, some done complicitly in the whirlwind of there minds in the blood and thunder of events. The fates of the two brothers and a community of people a hook in the narrative, the justices and injustices upon the page successfully evoke feelings of discomfort and emotions on what men did and do, questioning savagery and its real roots, the blood upon the soil and the cycle of violence and hate, and ultimately the endurance of the human heart at conflict with itself with events transitioning.
This narrative ticks for me one of the purposes of storytelling of which an author E.L. Doctorow mentioned.
“Good writing is supposed to evoke sensation in the reader—not the fact that it is raining, but the feeling of being rained upon.”
Themes handled with great telling and memorable characters like that of past and present masters writers John Steinbeck, William Faulkner, Flannery O’connor, James Lee Burke, Joe Lansdale, and Cormac McCarthy.

“There’s a drought. The cattle’s starving. How bad d’you reckon it is?”

“Tommy knew nothing about the Native Police—Father didn’t like talking about trouble with the blacks. Over the years he’d heard stories about fighting in the district—the whole colony, in fact—from stockmen and drovers and the odd traveler passing through. But Father wouldn’t discuss it. Not their business, he said. They had plenty of their own problems without getting involved in someone else’s war.”

“Tommy stared at the bodies. Couldn’t look away. Watching how they tilted, pirouetting slowly, the branches sagging, the feet only just clearing the ground, lumps of flesh that were once feet, legs that were once legs, men that were once men, turning, turning, the rope knots ticking, flies rippling on their skin, crawling in and out of cavities, a steady and hungry hum, the air alive with it, scent of char and rot, foul and sweet, drawing bird after bird into the canopy above, squatting there and waiting for the chance to feed on these men whom Tommy had no doubt he knew. He had seen them yesterday. He had seen them dragged in neck chains behind that trooper’s horse. He had seen their friend shot. Then he and Billy had gone home and eaten supper, kept their silence, and slept.”

“Four days ago the world had been one way, now it was twisted another way around. He couldn’t get his bearings. Didn’t know for certain where anyone stood. What he’d always taken as definite now felt flaky as the soil on the ground.”

“They ate their oats in the dark predawn, shivering by the fireside and squinting against sleep and the smoke belching into the room. Mother sat with them. Feeding up her men. She drank her tea slowly and watched them all eat, no one talking, a grim sense of ceremony in the air. Last meal. Last rites. Tommy went along with it, took his cues from the others, buried his excitement deep. Already Father seemed weary, Billy casual, though Tommy knew that was an act. Mustering wasn’t boring. This wasn’t a normal day. They wouldn’t see Mother or Mary, wouldn’t sleep in their own beds, wouldn’t sit round this table again, for the best part of a week.”

“Daylight peeled open the crater. A slow-moving crescent of shadow drawn west to east by the sunrise. The sodden ground steamed. A churned and bloody stew. Crimson soil, crimson wet. The steam whispered through the scrub and over the bodies and parts of bodies sunken there. Some still moved: inching through the slurry, dragging themselves along, raising a supplicant hand. A chorus of low moans underpinned the irregular popping of waddy and rifle butt, as the posse roamed the crater finishing off its task. Pop, pop, pop. Not unlike the sound of a wheat field, ripening in the sun.
Tommy lost amid the chaos, rifle held before him, turning circles on his horse. Aiming nowhere, at no one, while around him the bodies fell. To rifle shot and pistol shot and the swing of waddy blade: Jarrah lopped the head off a kneeling Kurrong like a flower from its stem; Rabbit cleaved a path through the crowd, whipping side to side with the ease of splitting wood.”

“Down they went everywhere. Down, down, down. Shot and clubbed and stabbed and trampled and drowned in the mud. A din to echo in the bones. Screams of life, screams of death, of joy, hatred, terror, despair. Children crying. Little faces riven by tears. Mothers, their mouths gaping, clutching infants to their chests and running for their lives. Men fighting hopelessly, pawing at the passing horses, until they too were dispatched. Tommy watched Noone dismount and stride through the bedlam like a gentleman out of doors, picking them off as he went; he saw Sullivan thrashing and firing at will, flailing like a rabid old cur. Locke in the midst of it all took a girl to the ground and rutted with her in the slop, her dead eyes rolling, head bouncing with each thrust, while around them carnage reigned. Billy also part of it, revolver in hand, taking purposeful aim at the natives as they fled, shooting them in the back, the chest, the head. And down they went everywhere. Down, down, down.”

Reviewed by Lou Pendergrast on 10 February 2018