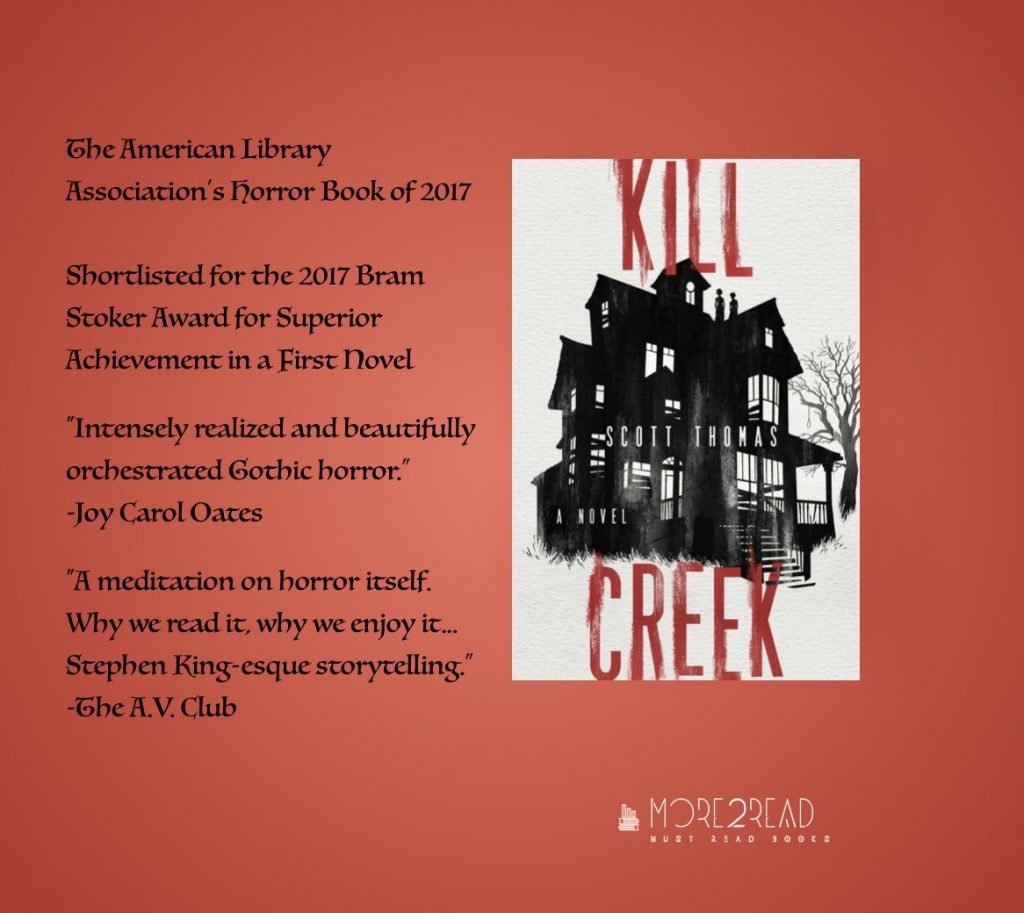 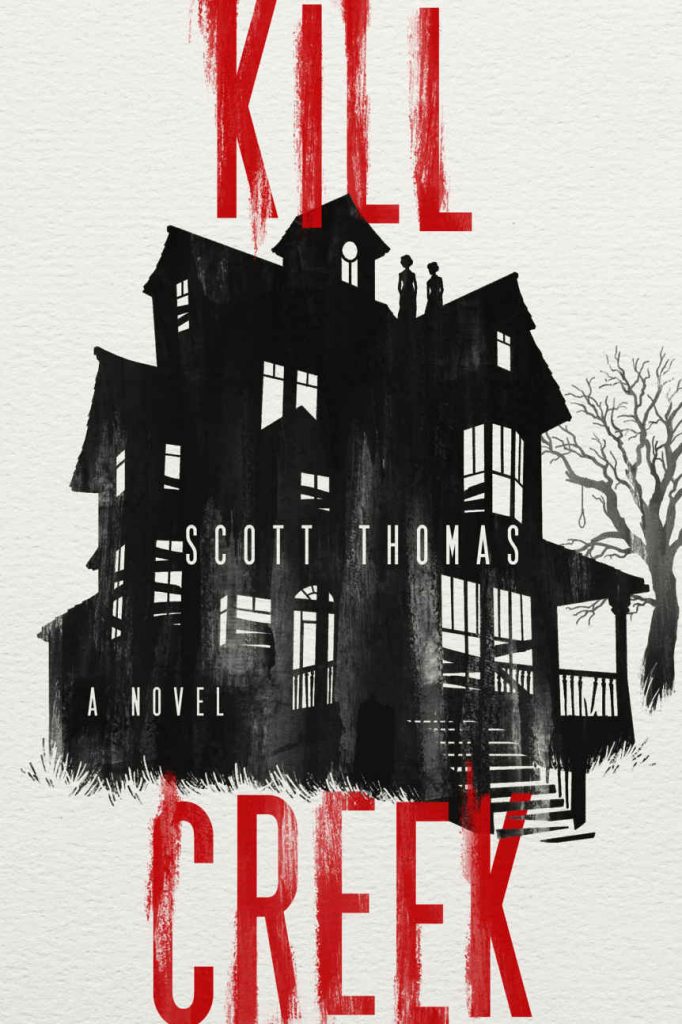 At the end of a dark prairie road, nearly forgotten in the Kansas countryside, is the Finch House. For years it has remained empty, overgrown, abandoned. Soon the door will be opened for the first time in decades. But something is waiting, lurking in the shadows, anxious to meet its new guests…

When best-selling horror author Sam McGarver is invited to spend Halloween night in one of the country’s most infamous haunted houses, he reluctantly agrees. At least he won’t be alone; joining him are three other masters of the macabre, writers who have helped shape modern horror. But what begins as a simple publicity stunt will become a fight for survival. The entity they have awakened will follow them, torment them, threatening to make them a part of the bloody legacy of Kill Creek.

“A meditation on horror itself. Why we read it, why we enjoy it… Stephen King-esque storytelling.”
-The A.V. Club

“Not since I read The Shining in eighth grade has a book scared the crap out of me as much as Kill Creek. The combo of a great premise and an exquisite ability to conjure dread and terror make Scott Thomas’ debut the perfect Halloween treat.”
-Andy Lewis, The Hollywood Reporter

“A menacing and cinematic story that evolves into a bloody, action-driven terrorfest. It is also a thought-provoking and enjoyable look at the genre itself… A match for readers who enjoyed Shirley Jackson’s The Haunting of Hill House.”
-Booklist (starred review)

“Kill Creek is a book from a horror fan to horror fans?creepy, atmospheric, and messed up in all the best ways…a must-read for anyone who likes it when their fiction goes to dark places.”
-Sam Reader, Barnes & Noble

“A group of best-selling horror writers team up for a publicity stunt at an infamous abandoned haunted house in the Kansas countryside, and guess what happens? Shit gets real!!! They end up awakening an entity that comes after them. That is creepy and crazy and it has a vibe like, hey guys, you kind of had it coming. Oh, and it all goes down ON Halloween night. Yeah, this is an obvious All Hallows Read selection.”
-Geeks of Doom

“Scott Thomas splendidly creates a fascinating co-dependency between the spooky edifice and the folk that perpetuate (and amplify) its morbid history. Thomas does a fine job with his characters, and the atmosphere is chock full of delightfully unsettling images. Horror aficionados will welcome it with open arms.”
-Scream Magazine

“Suspenseful, foreboding and macabre, Kill Creek is high-grade horror, successfully bringing together old world classics like The Haunting of Hill House by Shirley Jackson, elements of the highly stylised Japanese scare movies like The Ring, and a bit of Amityville Horror to give readers original twists and deathly scares.”
-Fantasy Faction

“There’ll be no admonitions to read this one with the lights on or alone at night. That’s a given. Alone or with friends, lights blazing, or a single reading lamp casting shadows over the page, it won’t matter. The result will be the same: shivers for many nights afterward. Kill Creek is the perfect novel to read on Halloween.”
-New York Journal of Books

“Kill Creek is a slow-burn, skin-crawling haunted house novel with a terrifying premise and a shockingly brutal gut-punch of a conclusion. This debut establishes Scott Thomas as a force to be reckoned with on the horror scene. His remarkable ability to build tension and suspense had me on the edge of my seat until the last page.”
-Shane D. Keene, HorrorTalk

“Kill Creek delivers the cinematic scares of The Conjuring without losing a literary feel. This is the kind of book that reminds you binge-reading came way before binge-watching.”
-Kailey Marsh, The Bloodlist

“Gives us just the right kinds of Halloween-spirit thrills while throwing in some new twists, and great characters.”
-Horrible Imaginings Podcast

“Anyone who is a reader of this site knows how partial we are to a good old-fashioned ghost story. Kill Creek fits the bill to the tee.” –HorrorFatale

“Kill Creek delivers 400 pages of pulse-pounding terror. Our readers and the publishing world alike drew fast comparisons to classics in the genre such The Shining and The Haunting of Hill House,, all the while commenting on how the story cleverly delivered an inventive, original, and wholly atmospheric tale even the most seasoned reader would lose themselves in.”
-Tracking Board

“I thought there were no more good haunted house stories to tell until I read Kill Creek. Scott Thomas uses a foundation of the expected tropes to build a story with not just a classic horror ambiance but also a unique architecture of tension.”
-J-F. Dubeau, author of A God in the Shed

“The story’s unique blend of literary horror and psychological thriller made it an addictive read, keeping me reading into the night, its creep factor levels notwithstanding. Kill Creek is for sure one of the better haunted house stories I have read in a while.”
-Bibliosanctum

A metamorphosis and exposition of horror writers and horror house over generations expounding on fears, horrors, and their complexities, juxtapositioning readers into their lives.

The discourse on writing and horror fiction in the narrative had me wonder into deep thought and that inclusion a gift to writers and readers serious about works added something better in just a run of mill condemned house Halloween treat you may had possible thought you were in for.

Storytelling and tellers in many forms contained within but there is one overlaying common truth, something lurks and something will reap and consume you like the house called Kill Creek.
Rule about kill creek is don’t talk about kill creek.

Will one Halloween event fair well and be rewarded with fame and money, or with levitating furniture, ectoplasm, and demonic voices?

An interview with Scott Thomas, author of Kill Creek (Inkshares, October 2017) from Inkshares on Vimeo.

Reviewed by Lou Pendergrast on 30 November 2019