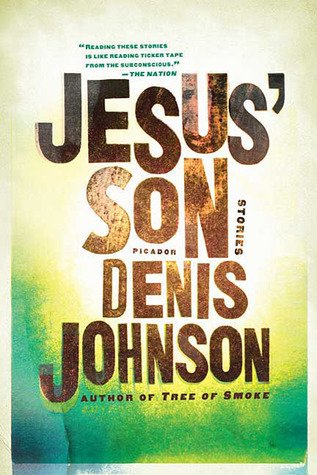 A collection of stories narrated by a recovering alcoholic and a heroin addict, offering a portrayal of American loneliness and hope.

Dennis Johnson has a good way to describe things and has placed trouble riddled characters amongst some literal beauty.
A collection of stories tied together with a common theme of struggle and drugs.
He brings your eyes into the lives of characters on this earth with problems.

The few stories I mention are…

Car crash while hitchhiking
As the title say a powerful descriptive story where a hitchhiker is involved in an accident with a family including a baby.
Visceral and shows very well all that the character experiences.

Out on bail
A friend is out of bail on an armed robbery charge. They drift around town locate a usual drink place and talk. Time passes places is gone they drift more into heroine and stealing they live a dangerous life one of them the two friends doesn’t make it through life safely.
Good tight story.

Dundun
You cant help thinking the narrator is a sociopath. He mentions possibly he doesn’t know what he does and may still have heart due to him not knowing what his left hand to his right hand is doing.
Your given a glimpse again of some drug users and violent characters, with death also contain within.

Emergency
Story of two hospital workers, a nurse and a orderly. They steal drugs from the hospital they work at and get high frequently. While off duty they go for a wild ride, they stop at a fun fair, they knock down a rabbit under the influence of drugs and they find themselves also lost. That one rabbit had many baby rabbits alive nearby so Georgie decides to take care of them but he can’t even help himself too high and tired.
Your taken through a wild day in the life of these two characters.

Beverley home
Maybe the better story of the collection along with emergency.
The main character has taken a job at a home for the terminally ill and sick. He’s a drug addict on therapy and trying to quit, he also has a tendency to be a voyeur a peeping tom on a religious couple, Mennonites and from near their window he sees all, their prayer, their religious readings and their love.
In the home he finds a sense of belonging, people with a struggle.

Some lines I noted

“The downpour raked the asphalt and gurgled in the ruts.”

“We took our passenger to a residential street where the buds were forcing themselves out of the tips of branches and the seeds were moaning in the gardens.”

“This situation had been a secret until now, like a terminal disease.”

“There moments in the Vine like that one–where you might think today was yesterday, and yesterday was tomorrow, and so on. Because we all believed we were tragic, and we drank. We had that helpless, destined feeling. We would die with handcuffs on. We would be put a stop to, and it wouldn’t be our fault. So we imagined. And yet we were always being found innocent for ridiculous reasons.”

“..,it burbled like a machine that polishes stones all night.”