Book Review: Into Bones like Oil by Kaaron Warren - More2Read 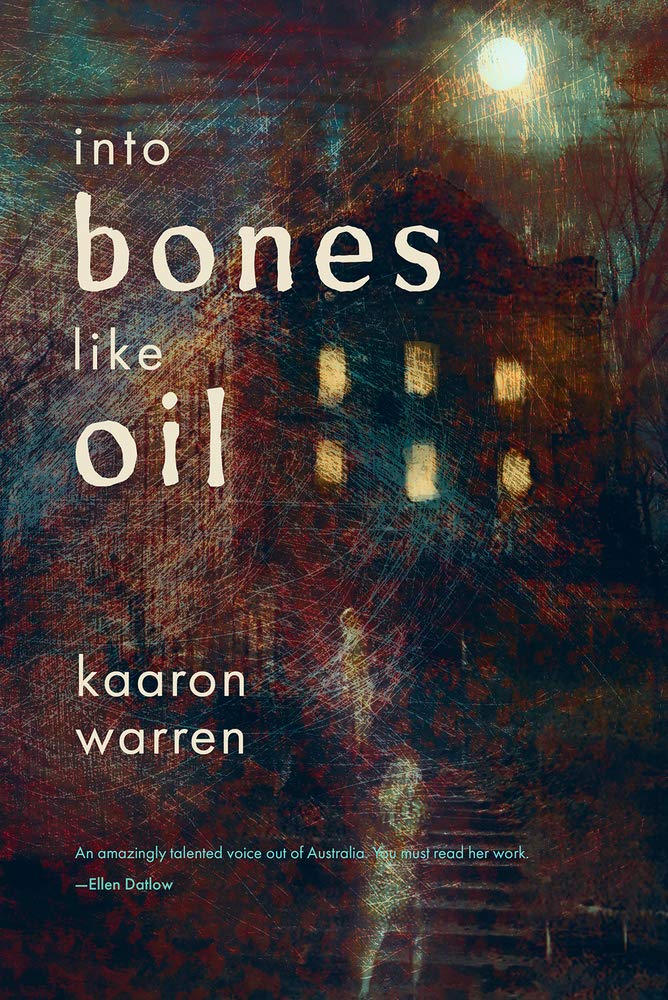 In this gothic-styled ghost story that simmers with strange, Warren shows once again her flair for exploring the mundane—themes of love, loss, grief, and guilt manifest in a way that is both hauntingly familiar and eerily askew.

People come to The Angelsea, a rooming house near the beach, for many reasons. Some come to get some sleep, because here, you sleep like the dead. Dora arrives seeking solitude and escape from reality. Instead, she finds a place haunted by the drowned and desperate, who speak through the sleeping inhabitants. She fears sleep herself, terrified that the ghosts of her daughters will tell her “it’s all your fault we’re dead.” At the same time, she’d give anything to hear them one more time.

“‘Into Bones Like Oil’ is a horror novella that, in my eyes, embodies perfectly Kaaron Warren’s universe. Starting as a classic situation – a woman seeks shelter in a strange house -, it very quickly becomes a gripping and idiosyncratic story of horror and redemption through the discovery of the pain of others. What I love about Kaaron Warren’s writing, is that the uncanny is actually the normality, and what we call ‘normality’ is actually the real horror. Her characters are all wrecks, broken down in life and in the afterlife, and yet they shine with a dark and moving humanity that makes the reader reflect upon the given notions of ‘evil’, ‘friendship’, ‘support’, and many more. If I should ever teach a class on contemporary horror, ‘Into Bones Like Oil’ would definitely be on my list, to show the students how genre is made to be broken and re-invented. And Kaaron Warren is one of the best in her field when it comes to that.”
— Seb Doubinsky, award-winnning author of the City-States Cycle series

“Protagonist Dora’s children are always at the back of her mind, at the fore. She has her eccentricities and multiplicities, and grave faults. As in all Kaaron Warren’s delightful but grim stories she borrows from something relatable. She reaches for the uncanny in the everyday, makes it stranger yet. Into Bones Like Oil is no deviant from this ingenious author’s modus operandi—she finds the fear she wants to explore, here taking a parent’s panic and extrapolating it. Warren is a mother who learnt to steal time standing at the stove cooking bolognaise sauce, stirring with one hand, writing with the other—she understands parental instinct and lures you with it. Narrated from Dora’s perspective, the text is clear, patient in its scene setting. It doesn’t draw attention to horror, but it is there: a haunting at the back or fore of your mind, inside a sunken building full of dilapidation. The house sat quiet at 6am—there is a strong sense of place. Dora’s room is so tiny, it’s like a grave. Corridor walls are full of shipwreck paintings. Everything is pale or sickly coloured. And even here, the author charms you, hoodwinks you. At your most ease, as you snuggle into your cushion, Warren tenders a fresh perspective to horror: It is not the sight of a severed hand or a head full of seaweed lolling on the ground. It’s the gazing at a house next door, the one with a curled cat on the wall. And there’s a child’s tricycle asunder by the flowerpots. And walking boots out the door that’s ajar. Sounds of washing in the kitchen. A waft of pie… But you blink and you’re not sure it’s a memory, because all you see is a sealed-up well smothered with moss. Warren stirs awake an everyday fear that comes at you one hundred and one ways. And it’s not a premonition because it is realised a billion times in a heart full of love. An accomplished story that is most unsettling.”
— Eugen Bacon, Aurealis Magazine

“A grieving mother is haunted by ghosts from her past in this dark, ethereal novella by Warren (The Gate Theory). Insomniac Dora, mourning the death of her two young daughters, comes to the Angelsea, a beachside rooming house, to escape her troubled life—but the Angelsea is anything but a peaceful respite. The ghosts of those drowned in a shipwreck visit each night to speak their last words through the mouths of the inn’s sleeping inhabitants. When the Angelsea’s owners pressure Dora to become a vessel for a ghost, she worries that she will encounter the spirits of her girls and that they will confirm her worst fears by blaming her for their deaths because she failed to protect them. No one in the small, eccentric cast of rooming house boarders is without their faults, and despite Dora’s flaws, readers will sympathize with her struggle to find forgiveness. This grim portrait of broken people in a broken setting reckoning with trauma, paranoia, and grief will especially appeal to horror readers who appreciate melancholic and atmospheric stories.”
— Publishers Weekly

“Beautifully written and profoundly disturbing, an evocative meditation on sorrow and loss, a ghost story in which the most terrifying specters come from within.”
— Tim Waggoner, author of The Forever House

“Warren delivers a tale of creeping dread. Dora is in a house that we all know and despise from travelling, but where the guests are used as conduits. For Dora the haunting by her past may be worse than anything supernatural and in Warren’s hands the horrific encroaches inexorably on the familiar. Recommended.”
— Tade Thompson, author of Rosewater and The Murders of Molly Southbourne

Dora in a new room, Tuesday by the coast, onwards through days and a need for sleep after bad things surpassed. Once a mother now some space needed to clear within, unsettled and unfinished business, loss and ghosts to meddle with in this hauntingly tender tale incorporating grief and finding solace. There will be no high fear factor ghosts of terror but the melancholy slow kind and the channeling that can work too in a tale.

“You know it’s more than a rooming house. You wouldn’t have come, otherwise. You need help to sleep. Everyone does who comes to me. You will sleep well here at The Angelsea. No doubt about that at all. It’s my little contribution.”

“Haven’t you noticed? This place is full of shipwreck stories. Most of us are f****n wrecks.” “Luke calls it Shitwreck House!”