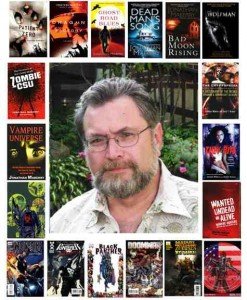 Jonathan Maberry is a NY Times bestselling author, multiple Bram Stoker Award winner, and Marvel Comics writer.  He’s the author of many novels including Assassin’s Code, Dead of Night, Patient Zero and Rot & Ruin.  His nonfiction books on topics ranging from martial arts to zombie pop-culture. Since 1978 he has sold more than 1200 magazine feature articles, 3000 columns, two plays, greeting cards, song lyrics, poetry, and textbooks. Jonathan continues to teach the celebrated Experimental Writing for Teens class, which he created. He founded the Writers Coffeehouse and co-founded The Liars Club; and is a frequent speaker at schools and libraries, as well as a keynote speaker and guest of honor at major writers and genre conferences.  Jonathan lives in Bucks County, Pennsylvania with his wife, Sara and their son, Sam. Visit him online at www.jonathanmaberry.com and on Twitter (@jonathanmaberry) and Facebook. 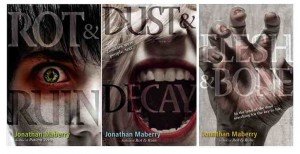 Lou Pendergrast:  Welcome and tell me who are the authors or which stories inspired you most to take pen to paper and write?

Jonathan Maberry: The two that come to mind are Ray Bradbury Richard Matheson.  I had the great good fortune to meet both authors when I was a teenager (back in the early 1970s).  They were both very generous men and they took time to answer my ten million questions about writing.  They also gave me signed copies of their books (SOMETHING WICKED THIS WAY COMES –which I read every Halloween; and I AM LEGEND).  I’ve also found great inspiration in the writings of John D. MacDonald, Shirley Jackson, Robert Bloch, James Lee Burke and Ed McBain.

LP: Where do you write?

JM: I have a large office at home, filled with pop-culture stuff and a terrific sound system; but usually I spend each morning writing in one of the many local Starbucks.  Then I migrate home around noon.

LP: How do you start on a story for example do you start writing once you have a set story or certain characters?

JM: With novels, I write the last chapter first.  With short stories I write the last page first.  That gives me an idea of the voice and lets me know where the whole thing is going to end up, then I back up and aim the book or story at that ending.  This allows me to write fast and have fun, while also maintaining some control over the plot.

LP: What’s the most important part of storytelling, plot, story or characters?

JM: For me all storytelling begins and ends with the characters. The story is about their experience, their reaction to events, the way in which these events impacts their hearts and minds –and their relationships. Everything else follows the characters.

LP: What makes a successful writer? 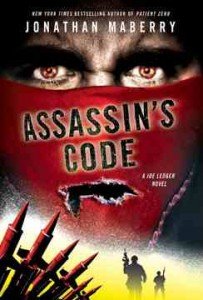 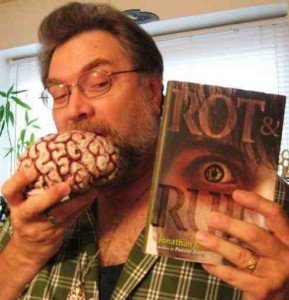 LP: In the Benny Imura series there is mention of a katana sword and you express knowledge in martial arts what marital art do you specialize in and what belt are you?

JM: I began studying jujutsu in the middle 1960s.  I also studied Hapkido (a Korean martial arts based on jujutsu) and kenjutsu (the Japanese art of swordplay).  I currently hold an 8th degree black belt in jujutsu and a 5th in kenjutsu.

LP: I love martial arts films which one are you’re favorites?

JM: My all-time favorite martial arts film is Jet Li’s FIST OF LEGEND. Brilliant, breathtaking and compelling.  But I’ll always be a fan of ENTER THE DRAGON. Bruce Lee at his best.

LP: The Bram stoker awards are approaching you have won and been nominated before, how important is it and how much has it helped a writer and readers?

JM:  It’s such an honor to be nominated for the Bram Stoker Awards. I was flabbergasted the first time I was nominated.  That was for GHOST ROAD BLUES. It was nominated for Best First Novel and Novel of the Year. I was stunned when I won for Best First Novel.  I really had no idea that would happen. Stephen King beat me for Novel of the Year, but it was my first novel and hey…he’s Stephen King.  I also won a Stoker for one of my nonfiction books, THE CRYPTOPEDIA, which I co-wrote with David F. Kramer.  Since then I’ve been nominated half a dozen times. It’s such an honor and always a thrill, and I know my readers dig it when I’m nominated. What’s really fun is that every year one of my friends wins, so it’s always a party.

Winning a Stoker for my first novel was an incredible validation. I didn’t know if I would continue with fiction beyond the trilogy (of which GHOST ROAD BLUES was the first). But that was a huge shot in the arm. It fired me up and helped me believe that trying fiction had been a good choice. I won that award in 2006. I’m now writing my thirteenth novel. It really set me on fire. 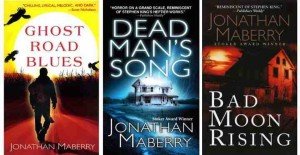 LP: Social media it’s changed the way we communicate, the link between a writer and a reader is so easier. Love it or hate what’s your upside and downside?

JM:  Social media is a crucial part of 21st Century publishing.  Because of the economy, publishers have dialed back on money for advertising, publicity and book tours…however with platforms like Twitter, Facebook and others, authors can reach a lot of readers, reviewers, booksellers, bloggers and fans. I love social media and I’m a frequent flyer on Facebook, Twitter, LinkedIn, GoodReads, and a few others.

One of the most important elements, apart from the marketing opportunities, is the chance to genuinely interact with readers. The distance between author and readers has decreased to the point where actual friendships are developing.  That’s wonderful. And it’s fun.

LP: Libraries how important are they, why are they losing them in the U.S.A and U.K and what can be done to save the libraries?

JM: People need to actually GO to libraries. They need to learn what a library is in the 21st Century. They aren’t cold rooms filled with dusty books.  Libraries are multi-media centers.  They have books, audiobooks, DVDs, CDs, videogames, Internet access and so much more. Also, libraries are community centers with excellent programming.  But they’re dying for lack of support.  Get out and SUPPORT THEM!

LP: Imagine there was a zombie outbreak and you could take with you to a safe island a few animals, belongings and few books what would they be?

JM: I’d grab my wife first.  Then I’d get a first-aid kit, a tool kit, my katana, and a big box of matches.  If I could, I’d bring a couple of dogs –big, smart dogs.  I’d make sure we had books on emergency medicine, basic survival, wilderness living, cooking, and a joke book. Hey, it’s the end of the world…might as well laugh.

LP: What novels are you working on now and looking to work on in the future?

JM: I’m currently writing EXTINCTION MACHINE, the 5th in the Joe Ledger thriller series.  This one deals with a new arms race based on technologies recovered from crashed UFOs.  After I finish that I jump right in to write FIRE & ASH, the 4th book in my Rot & Ruin series of post-apocalyptic zombie novels for teens.

I just finished editing V WARS, a shared-world vampire anthology, due out in May.

And I’m gearing up for the April release of ASSASSIN’S CODE, the 4th Joe Ledger novel, which has a strong vampire theme to it.

LP: Will there any possible adaptations to TV or film of your works?

JM: Well, we almost wound up on ABC with a TV series based on the Joe Ledger novels, but at the last minute the network decided to go with a remake of CHARLIE’S ANGELS.  That show lasted three episodes. We’re currently shopping the series elsewhere.

And we’re in the early stages of discussions about a possible film adaptation of ROT & RUIN, but it’s too soon to share any details.

LP: It has been an honor to chat with Jonathan Maberry, visit his website and read his books. He is a grand master storyteller pound for pound across genres. Thanks to all for your precious time. 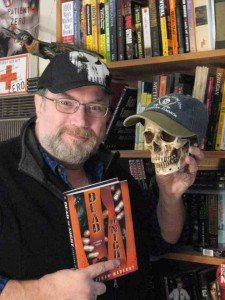