Book Review: In the Night Wood by Dale Bailey - More2Read

In the Night Wood by Dale Bailey 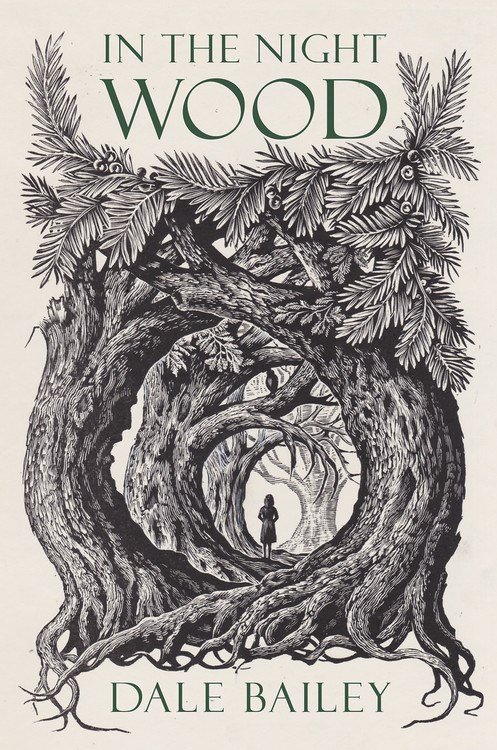 In this contemporary fantasy, the grieving biographer of a Victorian fantasist finds himself slipping inexorably into the supernatural world that consumed his subject.

Failed father, failed husband, and failed scholar, Charles Hayden hopes to put his life back together with a new project: a biography of Caedmon Hollow, the long-dead author of a legendary Victorian children’s book, In the Night Wood, and forebear of his wife, Erin. Deep in mourning from the loss of their young daughter, they pack up their American lives, Erin gives up her legal practice, and the couple settles in Hollow’s remote Yorkshire mansion.
In the neighboring village, Charles meets a woman he might have loved, a child who could have been his own daughter, and the ghost of a self he hoped to bury. Erin, paralyzed by her grief, immerses herself in pills and painting images of a horned terror in the woods.
In the primeval forest surrounding Caedmon Hollow’s ancestral home, an ancient power is stirring, a long-forgotten king who haunts the Haydens’ dreams. And every morning the fringe of darkling trees presses closer.
Soon enough, Charles and Erin will venture into the night wood.
Soon enough, they’ll learn that the darkness under the trees is but a shadow of the darkness that waits inside us all.

“Every story is a ghost story, Bailey tells us. But not every ghost story is as haunting as this one. Nor as luminously written, literate, absorbing, transporting, and all-around excellent. I couldn’t put it down.”
—Karen Joy Fowler, bestselling author of We are All Completely Beside Ourselves

“Dale Bailey has written a literary puzzle box that deftly mixes the scary, nasty folktales of the 19th century and Daphne du Maurier’s classic Don’t Look Now. In the Night Wood is an affecting, weighty, and haunting book about the shackles of grief.”
—Paul Tremblay, author of A Head Full of Ghosts and The Cabin at the End of the World

“In the Night Wood taps into the oldest, darkest roots of the fairy tale tradition, presenting the story of a family in crisis while steered by the pagan energies of a wilder age. It is beautiful, heartbreaking, and inspiring. Once again, Dale Bailey proves he’s among the best writers we have.”
—Nathan Ballingrud, Shirley Jackson Award-winning author of North American Lake Monsters

“In the Night Wood is a wonder: literary, intriguingly supernatural, and all too human. A must read for anyone who as a child wanted to find a magic wardrobe to explore or a rabbit hole to fall down only to realize as an adult that those whimsical childhood adventures have a darker side.”
—Molly Tanzer, author of Creatures of Will and Temper and Vermilion

“Elegantly written, In the Night Wood paints a moody portrait of a marriage threatened by betrayal and loss over the backdrop of a strange wood, mysteriously vanishing children, the legend of a horned king, and a children’s story that might be more than just a story. Bailey builds his world with great care, slowly and carefully drawing both you and the characters in, revealing some pieces of the puzzle only gradually. By the time you realize where the story is going, he’s already hooked you: you couldn’t escape even if you wanted to.”
—Brian Evenson, author of A Collapse of Horses

“In the Night Wood begins with a tragic loss and quickly develops into a mystery involving an estate, the history of the forest surrounding it, and a strange book written by the estate’s former owner. The mystery is compelling but the heart of Dale Bailey’s latest novel is the damaged relationship between grieving parents. Conquering their guilt and salvaging their love for one another depends on their ability to untangle the mystery. This is a heady combination of natural and supernatural influences, clues scattered by an enigmatic ancestor, and local legends both feeding and deriving from a work of fiction. Together these elements create resonance and urgency in a story about the complex workings of the human heart.”
—S. P. Miskowski, author of I Wish I Was Like You

“The past is never dead. It’s not even past.” – William Faulkner, Requiem for a Nun

Haunting eerie mediation and brain toxicity of loss, ghosts, and uncovering perplexities of marital discourse over loss, of most beloved, and fathers search for the sources that influenced the writing of In the Night Wood by Caedmon Hollow, and the ghost of Caedmon Hollow, the folklore and fact of it.

Succumbing the readers into the eerie woods, Hollow House the grieving couple descend into, the words will envelope you and enter one self in a labyrinth with a malevolent presence overshadowing, reading onwards unravelling and deciphering, cocooned in, hypnotic and viscerally reading till the end.

Warning cancel all tasks for a few hours, one hell of a tale for Fall!

“So many links in the chain of circumstance. So many stories inside stories, waiting to be told. Once upon a time. Once upon a time, at the wake for a grandfather he had never known in life, a boy named Charles Hayden, his mother’s only child, scrawny and bespectacled and always a little bit afraid, sought refuge in the library of the sprawling house his mother had grown up in.”

“The suffocating omnipresence of the wood, that sense of contained energies churning just beyond the range of perception, retreated.”

“The sun had edged over the trees by the time he reached the second archway. Charles looked down at Hollow House, toylike from this perspective. The wall seemed huge by comparison, primordial, ancient beyond reckoning. Framed in wisps of ground mist, the aperture looked like a passage to the underworld.”

“Stories intersecting stories, endless narratives unfolding. From the butterfly’s wing the typhoon that follows, from the acorn the oak.”

Reviewed by Lou Pendergrast on 09 October 2018