Book Review: I Would Haunt You If I Could by Sean Padraic Birnie - More2Read

I Would Haunt You If I Could by Sean Padraic Birnie 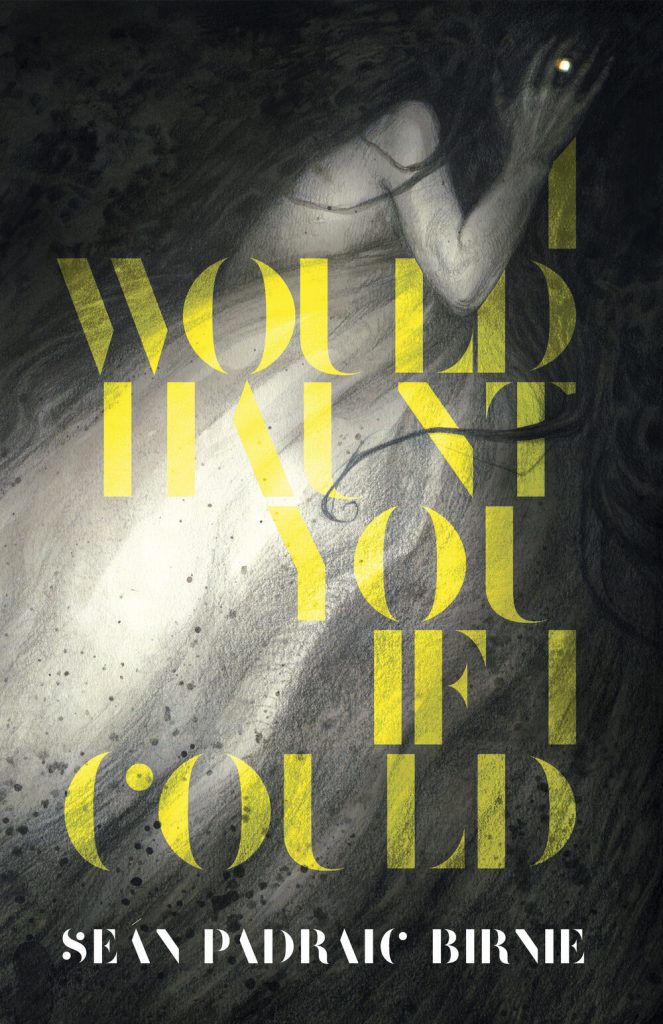 About I Would Haunt You If I Could

I would haunt you …

The debut short story collection from Seán Padraic Birnie does indeed haunt. Sown with seeds of sorrow and grief, and imbued with disquieting bodily horrors, the tales in “I Would Haunt You If I Could” are the product of an uncanny and febrile imagination. Birnie’s writing balances on the knife’s edge of the horror and literary divide. Stories that cut and bleed. Stories that linger and haunt.

Perplexing and thought provoking webs laid for the reader, visceral and concise, with brevity at times and shorter minimalistic psychologically works leaving the reader to carry on the fiction, which can be a good thing.
You may just enjoy the little portals and snapshots the author immerses you into with splendid channelling of things in our inner and outer realm with these little frames of lives, complexities, ones with grief, humour and nostalgia, lost and found souls, peculiarities and fractured minds, with perplexing and haunting disquieting minutes that get under your skin.
This a first collection of the authors and leaves hope of many works to look forward to read next.

New to It All

One recalls some grievances of a partner a once 24 year old with scratches, he has few things in retrospect to say involving pain and his increasing capacity for it with a new partner.
He should have stayed with the scratching one and not ventured further.
Not to be read before or after meal.
This story is about his relationship with Saoirse.
Memorable short that is leaves you with slightly harrowing afterthoughts on certain behaviors.

Out of the Blue

The unexpected visitor, a tragic mysterious return, one of “unfathomable silence.”
A haunting disquiet and heart-felt tale.

“overcome by an insidious unreality, a stiff and quite contained insanity.”

“Death is scandalous, absurd, and obscene. We manage it carefully, so as to ensure that its taint will not transfer on to us, the still-living and the not-yet-dead, even though it is always within us already, like an incubating virus, like planned obsolescence.”

“In time we can grow accustomed to the most extraordinary things. The outrageous and outlandish become inconveniences you soon find ways to work around. Given time, our sense of the world might expand to accommodate things that by rights make a travesty of all accommodations, all properties, all rightfulness.”

Harbouring of a secret

“As a child, she had wondered at others, did they possess such recessed chambers, and if they did-perhaps they did not-did any intimation of that secret place ever reach their conscious minds? Was it a lie that all the adults of the world conspired to maintain? Was something terrible and profound staked on the maintenance of that lie? Or- and this thought filled her with despair-was she the only one? A hollow girl.”

She been handed by her bother a monitoring device.
Danni after child, feeling unsettled, drained almost pale, she is imagining things or not?
A trick of the light or camera, through a one way baby monitor?
She an actor in her own fictional creation?
Danni is trying to get though some troubling things.
Who is really being evasive the story will have you wonder.
Unsettling, perplexing and a thought provoking tale.

I Would Haunt You If I Could

Insidiousness present and one woman’s complexities, fears loss and loneliness, with some humour too.
There is a mum who is always in the area to pop around and ready to direct next best move but what is she able to put into order with the chaos she finds in her proximity.
The longest story in the collection and the title also the name of the collection.
The ways in delivering the main aspect of tale out not an easy art an interesting delivery used that kept me immersed and entertained.

“When I was a child, I was afraid of three things, in defending order: one, of drowning; two, of heights, at which I would always hear the call of the void, a term I never heard until much later on, but which struck me, when I learned of it, with the force of an epiphany: yet, I thought, that is the thing that calls to me; three, of other children. So: drowning, heights, and other children. Now I live in a fourth floor flat by the sea, alone.”

“Because time is cancelled, finally; all the pushing and shoving of life has been suspended, at last. In this floating mood I sit and read and at some point stand again to continue idly browsing the museum of myself. Motes of dust hang like tiny lazy angels in the orange light of the humming bulb and I now longer know wether the bulb is humming or if it’s just my ears or the background radiation of the universe as atoms and quanta and memories and dreams churn in the void of all that is and all that is not and must never be.”

I Told You Not to Go

This is old man fixes aerial gets stuck and strangeness.

Concise little piece covering the aspects of having a portrait photo taking without fault in the final shot proves to be a hard task.
One may have found themselves in a dilemma like the two in this tale.
There is a Large camera in use and words on camera mechanics and application in life with various aspects of photography, focusing, film, lens, shutter and subject.

No one wants to talk about the staircase that leads to nowhere.
Memories and attachment to things, with grief and emotions running with some melancholy minutes with woman in her forties shifting from known melancholy to luminous unknown territories.

“When did you first know sadness? Is it possible to recall such a moment, or does it dissolve in the medium of your life upon entry before spreading out until it permeates it all? Is it possible to reach back, through memory, and mark the point before which there was no sadness in your life and after which it was there? Not the distress of something you had- the bottle, the breast-being taken away from you. Not anger at something you could not understand,. Sadness is more insidious thing you could not understand. It creeps into the cracks of things. It slips its elf into your memories of appear times, such that you grow to doubt if you were ever happy at all. Was it not all a sham, and the sadness-the Sadness: let’s afford it the dignity of a proper name-now merely your realisation of the fact? In this way it corrupts even the good things. By means of some bad magic, it detaches from its causes and becomes an autonomous entity, a Thing that rules your life. People give it different names or pictures, as if in the name or picturing of the Thing they might exercise some control: Melancholia, Depression, Sadness, Anhedonia; blah dogs, sad clowns, grey rain. Each term captures something of it and lets other parts go.”

“I turned the camera over in my hands. I peered at the film canister as if the surface of the thing might offer up some intimation of its contents. Of the world it contained, or the fragments of a world. As I held it then it struck me as the most mysterious of things. I finally had reason to go outside.”

“The world was a receiver losing its signal, declining into noise. No signal ow, only noise, only interference. A cloud of possibilities, each suspended on the cusp of their realisation. All this in the blankness of her gaze.”

Seán Padraic Birnie is a writer and photographer from Brighton. He holds a B.A. from Manchester Metropolitan University in English Literature and Creative Writing, and an M.A. in Photography from the University of Brighton, where he works as a Technical Demonstrator on the photography courses. His short fiction has appeared in venues such as Black Static, BFS Horizons, Litro, and Shadows & Tall Trees, and his writing on photography has appeared in scholarly journals and artists’ books. For more info, see: seanbirnie.com.