Book Review: I Travel by Night by Robert McCammon - More2Read

I Travel by Night by Robert McCammon 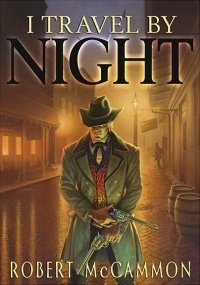 For Lawson, the horrors that stalked the Civil War battlefield at Shiloh were more than just those of war. After being forcibly given the gift of undeath by the mysterious vampire queen LaRouge, Lawson chose to cling to what remained of his humanity and fought his way free of the Dark Societys clutches. In the decades since, he has roamed late nineteenth-century America, doing what good he can as he travels by night, combating evils mundane and supernatural, and always seeking the key to regaining a mortal life.

That key lies with his maker, and now Lawson hopes to find LaRouge at the heart of a Louisiana swamp with the aid of a haunted priest and an unexpected ally. In the tornado-wracked ghost town of Nocturne, Lawson must face down monstrous enemies, the rising sun, and his own nature. Readers will not want to miss this thrilling new dark novella from a master storyteller.

Let a talented storyteller take you by the hand into the darkness, into the world of the Dark Society,
A world where a man travels by the night, he become one not that of humanity amongst the plains of the confederate battlefields at the age of 27, Wounded on the battlefield at Shiloh on the sixth of April 1862 this marked his journey into becoming something else.
His battle is aided by one friend a priest, he helps quench his thirst via the consumption of cattle blood.
In the present he is A gunslinger.
A man caught between two worlds with fangs but a very human pulsating heart dying to overthrow the presence of the inhuman.
He is a hired gunslinger and his new job undertakes handing 666 dollars in ransom for the safe return of a woman, he soon discovers that more than a woman’s safe return is in the balance.
He battles with one in the world who he has not yet set his eyes on before, a shape-shifter of a different kind.
Equipped with two guns a Colt and a Derringer loaded with 2 different bullets for 2 different species and wearing a Stetson he goes in search for la Nocturne city.

This story, is another example of the great storytelling capabilities of the author and his successful contribution to the writing world dealing with supernatural, he is a great writing force that i hope to remain for many a day to come.

The author has crafted a memorable character in the form of this vampire gunslinger who is with fangs but with a very human Heart battling and beating away against time.
An awesome tale from a writer who knows how to weave a horror with a very human character at his core, with a twist the supernatural, gothic and mysterious.
Perfection.

“But he traveled by night. It said so on his business card, along with All Matters Handled. He had been a lawyer, a husband and father, a soldier, and now…a vampire fighting to hold onto what remained of his humanity, and by doing so putting himself in harm’s way for many humans who needed his help, for he was truly an ‘adventurer’ now, to keep his wits and his mind sharp and what remained of his human heart beating.”

“He slept in the way of vampires, one part deeply tranced and gathering strength for the night, another part on edge, senses questing, fearful of the pain of sunlight like a darktime insect. He’d had much time to think, and considered that this pain was as much mental as it was physical; it was the pain of a body losing its fluids and withering up toward the death in life, yes, but it was also the pain of separation from light and life, and the more religious the person had been the more the shame and agony of what he or she had become.”

Also read my interview with this author in March 2012 >> https://more2read.com/review/interview-with-robert-r-mccammon/

Reviewed by Lou Pendergrast on 17 April 2013