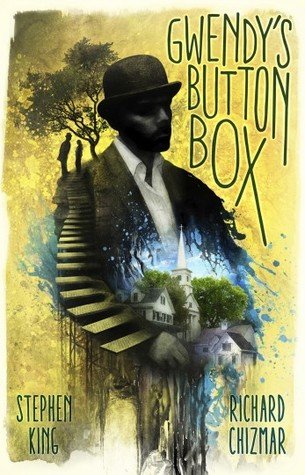 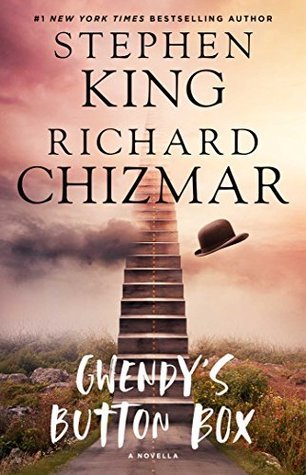 Set in the fictional town of Castle Rock, Maine

Stephen King teams up with long-time friend and award-winning author Richard Chizmar for the first time in this original, chilling novella that revisits the mysterious town of Castle Rock.

There are three ways up to Castle View from the town of Castle Rock: Route 117, Pleasant Road, and the Suicide Stairs. Every day in the summer of 1974, twelve-year-old Gwendy Peterson has taken the stairs, which are held by strong—if time-rusted—iron bolts and zig-zag up the precarious cliffside.

Then one day when Gwendy gets to the top of Castle View, after catching her breath and hearing the shouts of kids on the playground below, a stranger calls to her. There on a bench in the shade sits a man in black jeans, a black coat, and a white shirt unbuttoned at the top. On his head is a small, neat black hat. The time will come when Gwendy has nightmares about that hat…

The little town of Castle Rock, Maine has witnessed some strange events and unusual visitors over the years, but there is one story that has never been told—until now.

“Man, I love this story! The whole thing just races and feels so right-sized and so scarily and sadly relevant. Loved the characters… and the sense of one little girl’s connection to the whole world through this weird device. It all just sang.”
— JJ Abrams

“This absorbing novella by horror giants King (End of Watch) and Chizmar (A Long December) revisits one of King’s most popular locales.”
– Publisher’s Weekly

“It is a collaboration, and a seamless one at that…clear, idiomatic prose style and a flair for creating instantly recognizable characters…both a superior addition to the never-quite-finished saga of Castle Rock and a cautionary tale directed toward a world that grows crazier – and more incomprehensible – with every passing day.”
-Washington Post

Don’t talk to strangers, don’t take from strangers, do not take candy from strangers.
One summer, a young Gwendy Peterson seems to ignore these rules, at the top of round about hundred and fifty iron steps, ‘Castle View’s Suicide Stairs,’ with an encounter with… a man on a bench.
A strange man one may think, only for a second, maybe a descendant of Willy Wonka. There is some chocolates, but no chocolate factory, and he is not dressed in colorful clothes, he is dressed in black and is wearing a black Derby hat.

With great powers comes great responsibilities, great questions too, that is for Gwendy’s coming of age and metamorphosis along with her new friendships.
There is play with fate in the tale and there is the complexities of change and new fortunes, better turns and bad ones.
There is another Castle Rock tale that is good, Elevation, released in 2018 after this one, just as good portable pocket rocket.
This has great artwork and a colorful cover, do no hasten to read it in one sitting, with all its magical mystery, anticipating the becoming of the new improved Gwendy.
This is storytelling of Ray Bradbury and Richard Matheson strain.
You just gotta love this Castle Rock portable magic of a coming of age tale, pensive and mysterious, melancholy and magical.
Reviewed by Lou Pendergrast on 14 February 2019