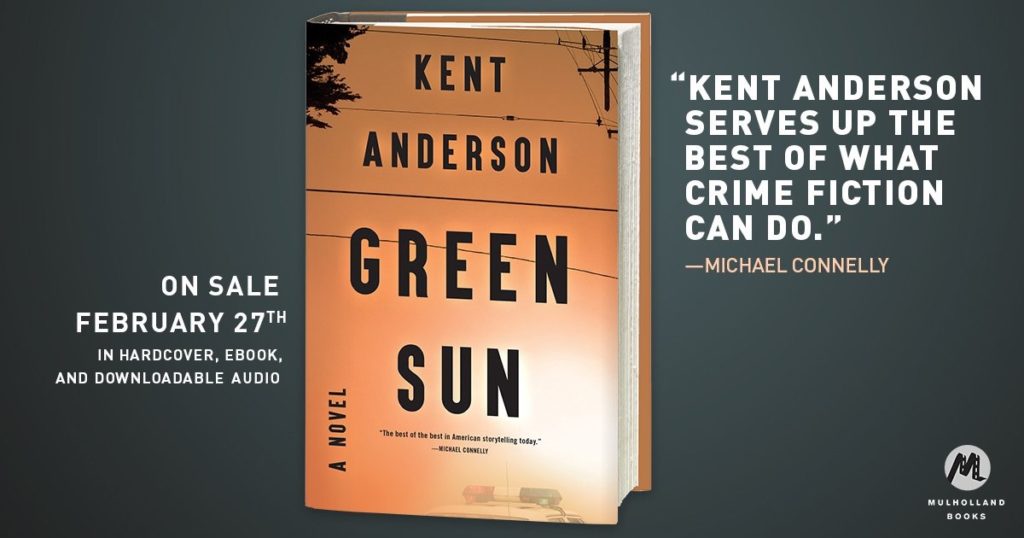 “One of the unsung heroes of crime fiction” (Chicago Tribune), Kent Anderson returns after two decades with this dazzling novel about justice, character and fate, set against the backdrop of an American city at war with itself. 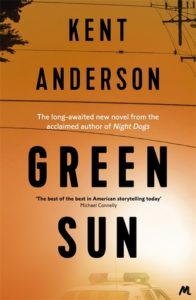 Oakland, California, 1983: a city churning with violent crime and racial conflict. Officer Hanson, a Vietnam veteran, has abandoned academia for the life-and-death clarity of police work, a way to live with the demons that followed him home from the war.

But Hanson knows that justice requires more than simply enforcing the penal code. He believes in becoming a part of the community he serves–which is why, unlike most officers, he chooses to live in the same town where he works. This strategy serves him well…to a point.

Every day, every shift, tests a cop’s boundaries between the man he wants to be and the officer of the law he’s required to be. At last an off-duty shooting forces Hanson tofinally face who he is, and which side of the law he belongs on.

Kent Anderson serves up the best of what crime fiction can do in Green Sun, showing us a slice of the world that stands for the whole wide world, and giving us Officer Hanson, whose perseverance and bedrock fairness and understanding of human frailty make him a hero for all places and times. The Hanson Trilogy should not be a secret. It’s the best of the best in American storytelling today.” —Michael Connelly

“Green Sun tells the unvarnished truth about what it is to be a cop in modern day America. I can give a suspense novel no higher compliment.” —James Patterson

“Kent Anderson is the finest portrayer of the cop novel, elevating the genre to the highest literary form. With his third novel, Green Sun, he completes a trilogy that would sit effortlessly alongside the masters, Cormac McCarthy and James Lee Burke. This is Ellroy for a whole new generation. I am green with admirable envy.” —Ken Bruen

“Kent Anderson has crafted a literary miracle here. We’re transported to ‘Nam and circa-’80 Oakland, reimagined as Hell, seen through the eyes of a crusading cop unique in the annals of police literature. This jazzy—and jazz influenced—novel is like the best of early Joseph Wambaugh. In Oaklandese: If I’m lyin’, I’m flyin’!” —James Ellroy

Officer Hanson walking the beat, hitting the street with no fear of dying, surviving Vietnam back from being from one danger zone to another in Oakland, and with death passing him he is making his way up the ropes to get his certificate, so that he can be a chief, a deputy of some place, a year on the street thats all he wanted to get his POST certificate: Peace Officer Standards and Training.
The author evokes with great craft all that unfolds in the main protagonist Hanson’s days on the streets, his clocking in and out and trying to make enough arrests to fill his arrest quota every month. This guy is likeable, the hook in the narrative is will he see it through alive, in the narrative he believes he cannot be killed since surviving war. He brushes with various characters that may just put him up to the test, the likes of one Felix Maxwell, Oakland’s major dope dealer, who drives a Rolls-Royce and is a killer to boot, all plays out within the shoes of a character from that show and true narrative the Wire. He has offers made to him from many, from love to hush money, with some possible love interest in the wings and possibly promotion or he just saving general public from harm. As a legit man caring for people he has the reader empathically reading on in his endeavours, conflicts, and dogging bullets.
The writing is top notch here, the author has a keen eye for putting you there in the scene, a time of no cctv and just before first mobiles came on to the seen, in and out on the beat becoming alive and intriguing upon the page. Officer Hanson, despite his flaws who has an ability if needed to carry out killing with precision and unflinching swiftness but chooses most times to talk people out of trouble into custody and always use gun last unless except the situation needed it, his enforcing law comes with heart, conscious, and smarts, some would hate him and some like him.
The author a veteran of war and an ex-cop has written what he knows with clarity and some good writing, social commentary, and some heart in the details.

“Running third now, Hanson picked up his pace. He could talk to the pain. He could hurt the pain if he had to. He could step out of his body, watch himself run, and leave the pain behind. But Hanson trusted pain. It was real, not some abstraction or metaphor or clever analogy at a goddamn English Department cocktail party. On the street, whoever takes the most pain wins, simple as that, and Hanson could take as much as anybody wanted to serve up.”

“Oakland, with the highest proportion of ex-cons of any city in California, fielded one-man patrol cars, and there were never enough of them to cover the 35 beats in 5 districts and 360,000 people. Hanson didn’t know it, but a lot of nights he was the only cop out there for 20,000 people. He still was able to talk people into going to jail, like he had in Portland, but it was harder in Oakland. And some nights he could feel his
mean streak growing. He had to be careful, he thought, or he might turn into what the OPD wanted before he realized what was happening. Every night it was life/death/life/death, but that’s what he liked, that’s when it seemed like all the bright lights came on for him.”

“Everything between him and the freeway was the Heart of Darkness, where everybody was a suspect, even the victims. Even the cops were just another gang out there, as brutal—maybe more brutal—as any of them, so outnumbered they had to be in order to survive. In the end, organized and superior brutality was what allowed them to enforce the laws of another country.”

“His best possibility now was to do a year on the street to get his POST certificate: Peace Officer Standards and Training.
To get the POST certificate, he had to make it through the eighteen-month probationary period, which included the five-month Academy. Nine months to go, he thought. He could do nine months.
With a POST certificate from Oakland, he could make a lateral transfer to a cop job anywhere in the state, trade in his East Oakland street-combat experience for a job in some little town down the coast. A place where he could become chief in a few years, where he’d be the law, an armed social worker enforcing the social contract of that particular jurisdiction. Where justice would be more important than the California Penal Code. If there was a problem, take care of it. By himself. Walk up to the house, the vehicle, the bar, the liquor store, the crowd, the parking lot. Go in, step up, announce himself, make a decision and resolve the problem right there. Enforce his own code his own way, and hell, do it without a gun. F… all of this by-the-numbers “officer safety” bullshit. He didn’t need a gun, only morons needed a gun. Half the cops killed every year were shot with their own guns. If somebody wanted to shoot him, they’d have to bring their own gun: they couldn’t use his. And they’d only get one chance.”

“Hanson is sleeping, gone to where the war never ends. Where it’s dusk now, up in Northern I Corps, with a five-man squad from the CRP, the Combat Recon Platoon, the twenty-five or thirty real killers they keep in camp. Psychos and drug addicts, war orphans, loners, haunted survivors, Vietnamese mercenaries paid in cash, U.S.”

“Surfing the wave now, the wave that could collapse beneath his feet and kill him if he lost his focus or his nerve. Just a moment of random bad luck could kill him now.”

“His headlights surprised the first lookouts along the perimeter of The Ville. They spun and ducked into the shadows, calling out in their soprano little-boys’ voices. “Rollers.” “Rollers.” “Rollers, Rollers.” Their calls reminded Hanson of summer evenings when he was a little boy, the neighborhood children playing hide-and-seek. But these boys, ten and twelve years old, made three hundred dollars a week as lookouts, warning the project drug dealers when cops were in the area. They gave most of the money to their mothers, at first, anyway, if she was still alive and out of prison. Or to an auntie, a substitute mother in the neighborhood. But all of them saved up to buy a “nine,” a 9mm pistol. Once they got a nine, they saved for an Uzi, because with an Uzi, they thought, nobody could …. with them. If they survived long enough to take over a corner franchise to sell cocaine or heroin, the Uzi would keep the other m……. from taking it away from them. They were the smartest, most ambitious, hardest working children in the ghetto. They would do well in their world, but few of them would live to be twenty. They’d never grow up and they’d die like soldiers.”

“Pain takes us to places we cannot anticipate, to events we have managed to completely forget, returns us to worlds we hadn’t known we ever visited. Pain bends our attention to what we would ignore. Hanson used to smile and say that pain was his friend.”


Reviewed by Lou Pendergrast on 27 February 2018