Review : Ghost of the Innocent Man by Benjamin Rachlin - More2Read

Ghost of the Innocent Man: A True Story of Trial and Redemption by Benjamin Rachlin 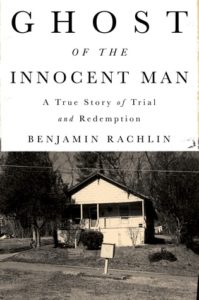 “A crisply written page turner . . . Rachlin painstakingly renders Grimes’s life behind bars . . . Deploying the same precision with which he documents Grimes’s prison life, Rachlin recounts the arduous and complex work to move the wheels of justice . . . Read Ghost of the Innocent Man to follow its twisted path . . . but don’t read for the gripping story alone . . . The National Registry of Exonerations calculates that over 18,000 years have been lost by innocent people serving time . . . Shouldn’t we be better than this?”

“Ghost of the Innocent Man is nothing less than a masterpiece of investigative reporting and virtuosic writing. It is a book that brilliantly substantiates society’s elemental promise to its citizenry–that we not have our freedoms wrongly taken from us. Benjamin Rachlin’s book is Greek drama brought into our own times. It will change readers’ lives, I think, and inspire them. It’s that good.”

“Ghost of the Innocent Man is deeply researched and, more importantly, deeply felt. For both reasons and many more, it is a profound meditation on the human condition and a vital contribution to the literature. The endurance and fortitude of Willie Grimes surpass those of any athlete or explorer. The passages in which Christine Mumma assembles lawmen and legislatures of all different creeds to help resolve an urgent national crisis should make us all consider these current times as not just toxic and tragic but filled with the possibility of hope and redemption. In the end, Benjamin Rachlin takes us through the justice system in all its immutability and shows us the light we can wield should we so choose.”

“Enraging, instructive, and profoundly moving, Ghost of the Innocent Man is a gripping lesson in the terrible costs of our flawed criminal justice system and the power that individuals have to change its course. The story of how a gentle soul like Willie J. Grimes received an undeserved life sentence is heartbreaking-full of human cruelty and carelessness and worse. But in the care and exactitude of Benjamin Rachlin’s telling, it is also an inspiring call for readily achievable reform. With judicious compassion, he narrates the errors, omissions, and societal forces that led to this wrongful conviction, setting it all squarely in the context of a persistent national disgrace, and reminding us of our responsibility to work toward true justice. The effect is remarkable and unforgettable.”

“An absorbing true-crime saga . . . Rachlin’s debut combines a gripping legal drama with a penetrating exposé of the shoddy investigative and trial standards nationwide . . . His narrative offers a moving evocation of faith under duress.”

“An absorbing story . . . In his moving first book, Rachlin, with confidence and care, relays both the terrifying personal costs and complex legalities, so dependent on fallible humans, of wrongful conviction and imprisonment.”

In this compelling tale of crime and punishment (of the wrong person), Rachlin explores a horrible case of wrongful conviction and ultimate exoneration. Willie Grimes maintained his innocence in his 1988 trial, but was convicted on flimsy evidence and served over 20 years behind bars.  By twinning Grimes’ story with the establishment of North Carolina’s Innocence Inquiry Commission, which was responsible for overturning the conviction, Rachlin enlarges the book’s scope, making it not merely a chronicle of a serious miscarriage of justice, but a broader indictment of a flawed system, and the prison industrial complex, that made it possible.

“Some things you must always be unable to bear. Some things you must never stop refusing to bear. Injustice and outrage and dishonor and shame. No matter how young you are or how old you have got. Not for kudos and not for cash: your picture in the paper nor money in the bank either. Just refuse to bear them.”
-from INTRUDER IN THE DUST by William Faulkner

Injustices with a quiet giant, Willie J Grimes.
Unsettling on its revelations, informative on the history of injustices.
Willie Grimes will stay with the reader for some time for his patience against the injustice.
This work will have you ruminate on the ones that have been sentenced to death innocents unjustly lost.
They may be some respite in knowing Grimes was one of the lucky ones that was freed eventually.
The life to and fro from prison to prison, the inadequate representations and care, and lack of chances of parole despite the weak evidences against him.
The lack of proper due care or maybe even due respect to process evidences, all things preceding and after his arrest.
Race could come into this failure, but the lawyers representing him had two others, two white males, who where also exonerated after some time of incarceration also mentioned in this book in not so much detail, this book is more about Grimes’s sphere.
Various chapters walk the world around Grimes, his incarceration, his poverty and the pursuit of truth and freedom.
There is also some telling on how the North Carolina’s Innocence Inquiry Commission was formed and its first few successful exonerations which started the cogs working for some justice upon a part of this earth.
A well done representation and informative investigative writing on a tragic case of innocent charged as guilty.

Reviewed by Lou Pendergrast on 23 August 2017