The Force by Don Winslow 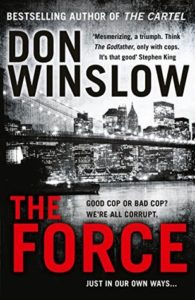 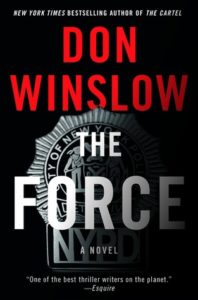 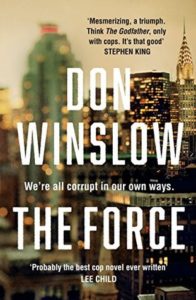 Praise for  The Force by Don Winslow:

‘Hard-hitting … one of the great works of fiction about the police … superbly chronicled’ : The Times

‘Stephen King, James Ellroy and Lee Child see Don Winslow as one of their number, and he confirms his right to belong in this elite with The Force … a panoramic picture of a criminal justice system permeated by corruption, cronyism and lies’ Sunday Times, Thriller of the Month

‘Breathtaking. Think of TV series The Sopranos … told in majestic prose … this is without question among the finest ever police novels’ Daily Mail

‘Don Winslow’s magnificent novels have positioned him as the next big-hitter of crime writing … Gripping’ :Metro

‘Mesmerizing, a triumph. Think The Godfather, only with cops. It’s that good’ :Stephen King

‘A stunner of a cop novel with dialogue, gritty New York setting and moral pincers all in the service of a devastating plot’ :New York Times

‘An epic novel of devastating moral complexity … fans of modern masters such as Don DeLillo, Richard Price, and George Pelecanos will be richly rewarded’ :Publishers Weekly

‘Shocking authenticity is the lifeblood of Don Winslow’s The Force. I stopped everything I was doing to read it straight through. A searing journey through the corruption that lies at the heart of our justice system. I wish I’d written it!’ : Greg Iles

A New York tale that delivers with a masculine potent prose in a rat a tat formation he has you hanging on in the developing momentum, in the web.
This plays out like a chess game you have your pawns and your knights and then your kings and just how will it all end keeps you in the hook.
A good cop that’s all he wanted to be, but in the miles that contain New York many powers are at play upon the stage and behind the scenes, in a chess match, right from the poor man on the street wanting a fix of food, or drink, or home, or a fix of another kind, a high, there is entrapment and enterprise to be had for the taking, people’s lives that don’t matter in play, pawns with odds against them, this cop Denny Malone makes moves some that he will regret and some that just had to be done to keep the bad guys not so badder and the guys at top not so comfortable.
Relevant writing for todays times, stripped from the headlines, with Cops and policing, and the crossing over to crooked or staying clean and following the rules, the politics, the racism, the hard job of being a good cop amongst corrupt, all have their time of day upon the page with the main character, an irish American cop, Denny Malone, one that loves New York, he has policing in his blood a New Yorker through and through, an unprejudiced cop, a likeable cop for the reader, caught in some intricate goings on that just has you wandering who’s in the right.
The main protagonist, Denny Malone, the author handles with some great character development.
The thrill is there, the empathy for this cop against it and part of it and in the thick of it, has the reader find himself hooked in the narratives sharp and potent prose with brevity and well crafted dialogue (that does have profanities so be aware).
Read the book, and when its out, watch the movie.

“You wanna keep your streets safe, you gotta be on those streets—days, nights, weekends, holidays, whatever it takes, and your wives, they knew what they signed up for, and your kids, they learn to understand that’s what Daddy does, he puts the bad guys behind bars.”

“Malone is six two and solid. Thirty-eight now, he knows he has a hard look to him. It’s the tats on the broad forearms, the heavy stubble even when he shaves, the short-cropped black hair, the don’t-fuck-with-me blue eyes. It’s the broken nose, the small scar over the left side of his lip. What can’t be seen are the bigger scars on his right leg—his Medal of Valor scars for being stupid enough to get himself shot. That’s the NYPD, though, he thinks. They give you a medal for being stupid, take your badge for being smart. Maybe the badass look helps him stay out of the physical confrontations, which he does try to avoid. For one thing, it’s more professional to talk your way through. For another, any fight is going to get you hurt—even if it’s just your knuckles—and he doesn’t like getting his clothes messed up rolling around in God only knows what nasty shit is down there on the concrete. He’s not so much on the weights, so he hits the heavy bag and does the running, usually early morning or late afternoon depending on work, through Riverside Park because he likes the open view of the Hudson, Jersey across the river and the George Washington Bridge.”

“Malone grew up there, his wife and his kids still live there, and if you’re Irish or Italian from Staten Island, your career choices are basically cop, fireman or crook. Malone took door number one, although he has a brother and two cousins who are firefighters.”

“The St. Nicholas Houses, a baker’s dozen of fourteen-story buildings straddled by Adam Clayton Powell and Frederick Douglass Boulevards from 127th to 131st, make up a good part of Malone’s working life. Yeah, Harlem has changed, Harlem has gentrified, but the projects are still the projects. They sit like desert islands in a sea of new prosperity and what makes the projects is what’s always made the projects—poverty, unemployment, drug slinging and gangs. Mostly good people inhabit St. Nick’s, Malone believes, trying to live their lives, raise their kids against tough odds, do their day-to-day, but you also have the hard-core thugs and the gangs.”

“It’s what he loves about New York—you want it, it’s there.
The sweet, fetid richness of this city. He never really got it until he left his Irish-Italian blue-collar, cop-fireman Staten Island ghetto and moved to the city. You hear five languages walking a single street, smell six cultures, hear seven kinds of music, see a hundred kinds of people, a thousand stories and it’s all New York.
New York’s the world.
Malone’s world, anyway.
He’ll never leave it.
No reason to.”

“You spend your whole f***g life trying to keep this shit out of people’s arms and no matter how much you seize, how many dealers you bust, it just keeps coming anyway, right up the line from the opium fields, to the labs, to the trailer trucks, to the needles and into the veins.
One smooth, ever-flowing river.”

“You’ve been breathing corruption since you put on the shield, Malone thinks. Like you breathed in death that day in September. Corruption isn’t just in the city’s air, it’s in its DNA, yours, too.
Yeah, blame it on the city, blame it on New York.
Blame it on the Job. It’s too easy, it stops you from asking yourself the hard question. How did you get here?
Like anyplace else.
A step at a time.”